You know how you always dream of having a holiday somewhere with beautiful beaches, great sea food and blue-blue water, with nothing around you but wilderness? And normally you think about such places as being somewhere on some remote islands, far away and quite expensive. But it seems that such places do exist also close to us, Europeans and they are actually very easy to reach.

It’s the case with the Algarve region in south of Portugal. I will have to admit this is the most beautiful place I have ever been in Europe in terms of sea and beaches. It was more than ever expected and also more than ever imagined. We spent 5 days in the Algarve region, but tried to go for the more remote areas and beaches, and not head to the big towns with crowded places.

The Algarve is Portugal’s most popular holiday destination due to the clean beaches (approximately 200 km of them), the cool, unpolluted water, and the fact that it is relatively cheap, very safe and overall welcoming. English is spoken almost everywhere you go.

The Algarve is rich in culture and diversity. If you are looking for fast paced resorts or a calm tranquil setting either is attainable. The entire region is approx.5400sq km and is graced with over 100 different beaches. If you are into nature the choices are many from the Ria Formosa to Monchique mountain, from Caldeirão mountains to Sagres cape, in fact there are over 30 hiking trails (as per official Turismo de Portugal guide books).There are over 30 courses doted throughout the region. Although the permanent residence population is under 500,000 the area receives more than ten fold that in tourism each year. The busiest times of year tend to be July/August.

As for its geo-morphology, the Algarve region is absolutely spectacular, without any argument. Clifs rising from the sea, small caves all over the shore, make this region the dream of any photographer in search of the perfect landscape.

Regarding the formation of the shore and the beaches, the evolution of the cliffs takes place by a process of occasional landslides occurring mainly in winter when the action of the main physical agents (the waves and the precipitation) are at their most intense.

The rocks are highly susceptible to the actions of fresh water and are easily shaped by it, giving rise to what is know as a karst landscape.

The action of physical agents (rain, the sea  and living creatures) results in the formation of a highly indented coast line with a remarkable variety of features: arches and caves, sea stacks and sinkholes.

We went to Algarve at the end of June and it turned out to be the best time of the year to actually have this trip. The air temperature was a bit high (around 32 – 35 Celsius degrees during the day), but the Ocean water was perfect to chill. Not too cold, not too warm. And also it’s not very crowded as most people prefer to go in July/August or even September.

The locals say that June is the best time of the year to go and enjoy a beautiful holiday in Algarve, due to the facts mentioned above: acceptable air temperature, perfect water temperature and not so many tourists around you. We did have some friends who decided to go in mid September and it seems that it wasn’t such a good idea – the air temperature was a bit low (around 25 degrees Celsius) and also the Ocean water was quite cold (although on many website you will find that in September the Ocean water is very warm).

The Algarve is the southernmost region of mainland Portugal and it incorporates 16 municipalities. The region has as its administrative centre in the city of Faro, where both the region’s international airport (FAO) and public university (the University of the Algarve) are located. Tourism and related activities are extensive and make up the bulk of the Algarve’s summer economy. Production of food, which includes fish and other seafood, fruit, oranges, carob beans, figs and almonds, is also economically important in the region.

The Algarve is the most popular tourist destination in Portugal, and one of the most popular in Europe. Its population triples to nearly 1.5 million people in the peak holiday season thanks to seasonal residents, and receives an average of 7 million foreign tourists each year. In total, including national visitors, almost 10 million people visit the Algarve annually.

The Algarve is currently the third richest region in Portugal, after Lisbon and Madeira, with a GDP per capita 86% of the European Union average.

I wish we could have spent more time in Algarve and check all the beautiful beaches there, but let’s hope there will be a second time in the near future. We had rented cars, which helped a lot to move around and change place every day. There are also hiking trails and biking options, but if you want to explore the area on longer distances, than a car is needed – not sure if there is any public transportation system.

We had our headquarters close to Praia da Marinha, that’s where we rented a villa for 5 nights and from there we moved around the coast. The villa was just amazing, with everything we needed to have a great vacation (pool included to get cool in the evening).

I will give you a short insight on the beaches we checked and where they are located.

This beach is not only famous for its beautiful cliffs, but also for the high quality of the water. Marinha Beach has often been used by international advertising agencies and by television producers in advertising campaigns.

Praia do Buraco is a small beach that can be reached from Praia da Marinha via a natural tunnel in the cliff. It’s quite small and perfect for hiding away from the crowd.

Praia do Barranquinho is a very small and remote beach, about 30 minutes walk from Praia de Marinha, on a hiking trail. It can only be reached on foot, no cars can get there and it’s perfect if you want to be on your own. It’s not very known by the tourists and we did only see locals going there for a swim during the weekend.

Praia da Malhada do Baraço is only reachable by boat or swimming from Praia do Barranquinho and here you will get all the quiet you need, since there is most of the time, nobody there. There are some times boats coming with tourists for a swim and a nice lunch, but other than that is mostly deserted.

Praia Benagil is about 40 minutes walk from Praia da Marinha and there is a marked hiking trail for going there. You can also get by car, but the hiking trail is very impressive and quite accessible for anyone. Don’t forget to get some water with you though, as it’s incredibly hot.

Praia Benagil is the one hosting the most beautiful cave in the area and probably the most known one – Benagil cave. It can only be reached swimming or by boat, but it’s a must see if you’re in the area.

Praia do Carvalho is another amazing beach in the area, about 20 minutes drive from Praia da Marinha, going West.

After parking your car, you have to go through a tunnel in the cliff to actually get to the beach. Beautiful rocks rise from the sea, to create the perfect landscape for this beach.

Praia da Dona Ana is regarded as the most picturesque beach of the Algarve region. The small cove is bound by steep colorful strata cliffs, while the golden sands are lapped by the crystal clear waters – simply put, the Praia da Dona Ana is stunning. Dona Ana beach is within walking distance of central Lagos and makes for an ideal location to spend a day relaxing.

Besides relaxing on the beach and enjoying the perfect water of the Atlantic Ocean, we took some time to do some boat trips to actually check all the beautiful caves and grottoes that the sea has carved in the cliffs of the shore.

For the first boat trip we went to Lagos and there you will find small companies that will take you for 1 – 2 hours tours to check the area. It’s a must do when in Algarve, as the shore is full with beautiful small caves and grottoes. The boat will take you in most of the biggest ones but if you want to check on yourself the smaller ones, you can also opt for a canoe trip.

We also took a boat trip from Praia Benagil (just go to the beach and ask for info). This was mainly to go into the Benagil Cave, but we did see some other amazing caves during the one hour trip.

Of course, the Benagil Cave was the attraction of the trip and we did manage to get some very nice shots while there.

Some tours also include a one hour stay in the cave, for a nice swim, but we didn’t go for that one (maybe next time).

Each boat trip cost about 15 EUR/person and you can negotiate to get a good discount if you come with a larger group.

As for the food in the area, we didn’t have the chance to check out too many restaurants. Having rented the villa with everything we needed in it, allowed us to prepare our meals there, instead of eating out. We did check some places, recommended by the villa owner and we were not at all disappointed.

Casa Lamy en Benagil, with a great view of the beach, the decoration is not great but the food is amazing. They have very good tapas, with excellent sea food.

In Lagos, the restaurant Reis, a little traditional restaurant with a great service and fantastic food. Try the cataplanas, it’s a local dish, absolutely delicious.

As for the accommodation, as I said before, we rented a villa very close to Praia da Marinha, called Villa Marinha. Perfect for our group of 12 people, very well equipped and in a perfect surrounding.

So this is how our Algarve trip looked like. It was just perfect and this all thanks to the beautiful landscape that left us mesmerized each day we spent there. 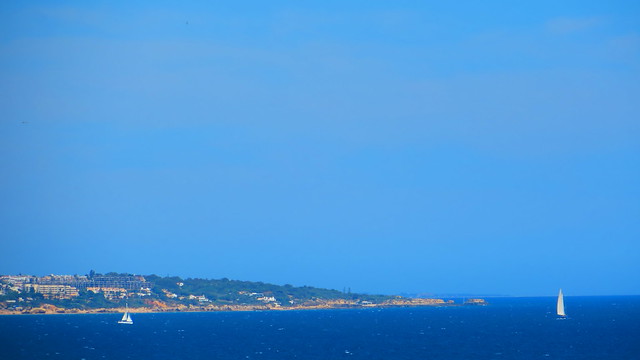 This is also a map of the places we checked. Looking at it, I can see it covers such a small part of the beautiful Algarve, that a return trip there has to take place.

Leave a Reply to Becky B Cancel reply