[Romania] Maramureș: where you cling the map on the wall

Summer has come earlier than expected in Romania this year. We are only in May and the temperature is constantly reaching 30 degrees almost every day. Sounds a bit hot, but it also sounds like a good time to start the road trips that we have been planning all winter long.

1st of May is a bank holiday in Romania, so we took advantage of this and had a short vacation, especially since we also celebrated Easter on the 6th of May. The destination of our first trip was somewhere far, in a place we like to say about ‘you hang the map on the wall’.

The Maramures area of Romania is situated in the upper north part of the country, where tradition still makes the rules, where simple values are still considered important, where people are nice and friendly and where the mountains take your breath when looking at them. We had 4 days to experience all this and we came back more peaceful, feeling like better people.

First day started really early as we had to leave from Cluj Napoca to our first destination, Borsa, where we were planning to see the Cascada Cailor (Horses Waterfall). 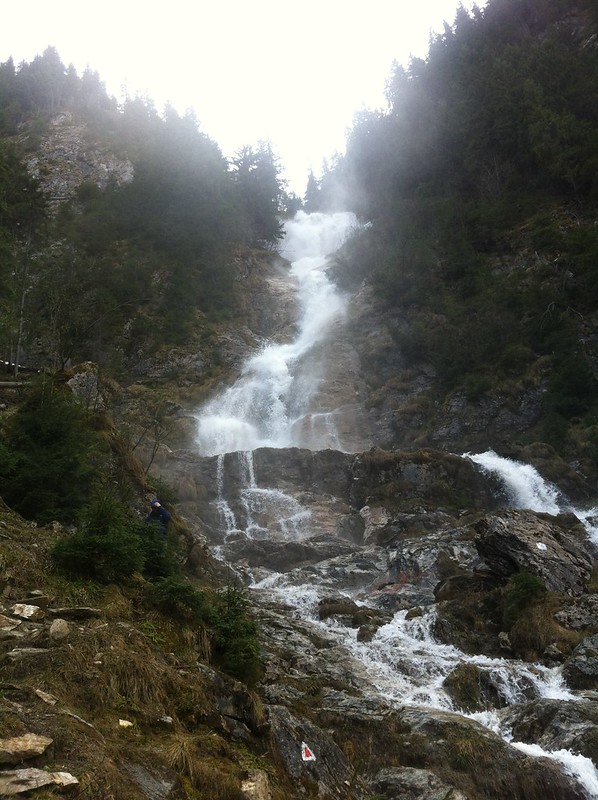 Cascada Cailor is the biggest waterfall in Romania and from my perspective one of the most beautiful natural places of our country. Situated in the Rodnei Mountains, it has a 90 meters fall of waters gathered in a glacial cirque from melted snow and from raining over the year.

Seeing the waterfall was absolutely magic for me. Surrounded by snow that had not yet the time to melt, you could spot from place to place lovely snowdrops and spring flowers bathing in the warm sun. Staying in front of the waterfall, listening to the water falling and breathing the fresh water vapors felt like being in a dream, in a fairy tale where magic happens and wonders come true.

The waterfall can be easily reached from the Borsa Complex by taking the lift and then walking for about 20 minutes. The area is very well signaled, so you cannot miss your destination. The lift only works from 10 AM until 5 PM and there has to be a group of 10 – 15 people to climb up, so start making friends with people you see around. Since we got to Borsa quite late the lift was not working and we had to walk back to the Borsa complex where we had our car parked. Walking was actually a very good idea, we just followed the path, passed by a small river, enjoyed the beautiful weather and the amazing view. 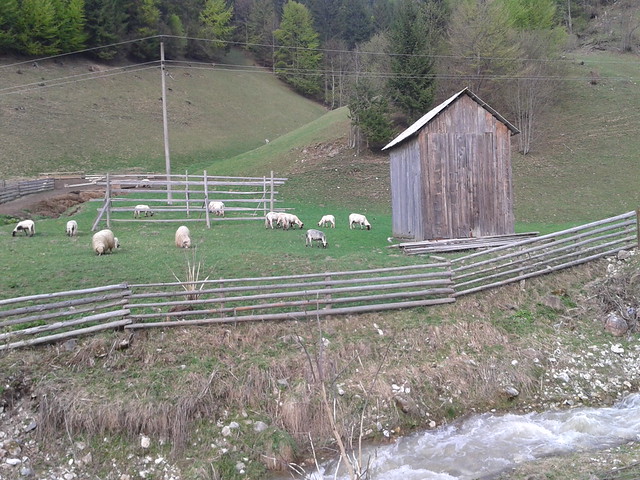 For the first day, this was our only destination, but it was more than enough to get us really tired. So we decided to just go to the hotel we booked in Viseu de Sus, have a dinner and go directly to sleep.

The next morning we woke up early and headed to catch an available seat in the Mocanita. Mocanita is a steam engine train and probably it is the last steam engine train in Romania, and Europe, that is still being used for commercial purpose. Normally it is used to carry wood from the forests nearby. It is also one of the most important touristic attractions of Maramures so you cannot miss it if you go there. 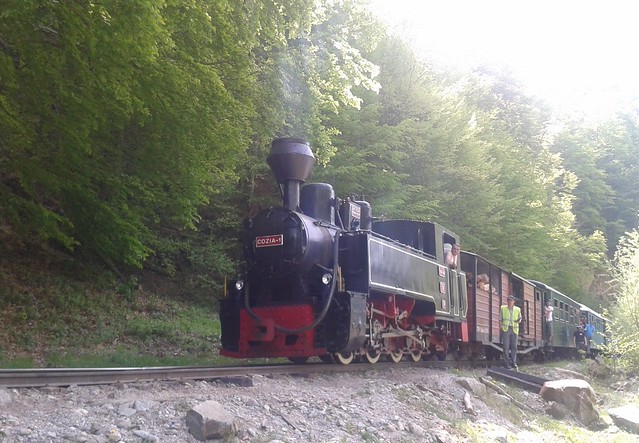 Before going to have a trip with the Mocanita I heard some nasty rumors that it would actually be boring, although my expectations were very high. In the end, after the 5 hours spent in this very authentic train, I was very enthusiastic of the whole experience. Driving through the mountains on the Vaser Valley was absolutely fantastic. Passing by forests, high mountains and old houses felt like we were going back in time, somewhere 100 years ago, when life was simple and relaxing. Hearing the noise of the Mocanita and seeing the steam blown away in the air just made me get goose bumps.

The Mocanita path is actually 21 kilometers long, but we only did the first 10 – 12 kilometers, where we had a stop for about an hour, for a beer and barbeque and then came back to the Viseu de Sus train station.

The ticket costs 12 EUR and during summer time, Mocanita runs every morning. This time, as it was also the 1st of May, it was very crowded and we had to make a reservation. During the trip you get a shot of tuica, a traditional alcoholic drink and a donut.

In the train station there is also a little Jewish museum were you can learn interesting thinks about the Jewish community from Maramures.

After the trip with Mocanita we decided to just relax for the rest of the day and head to Sighetu Marmatiei where we had another hotel booked for the next 2 nights.

Third day of our trip started again early, with a healthy breakfast. The plan for the day was to visit The Memorial of the Victims of the Communism and of the Resistance in Sighetu Marmatiei and the Merry Cemetery in Sapanta.

The Memorial of the Victims of the Communism and of the Resistance is dedicated to reconstructing and remembering what the Romanian people had to suffer during half a century. Being a Romanian, this was actually a very sad experience. Most of the things that are presented there I already knew, but just seeing them all together was more shocking and terrifying for me than I could imagine. 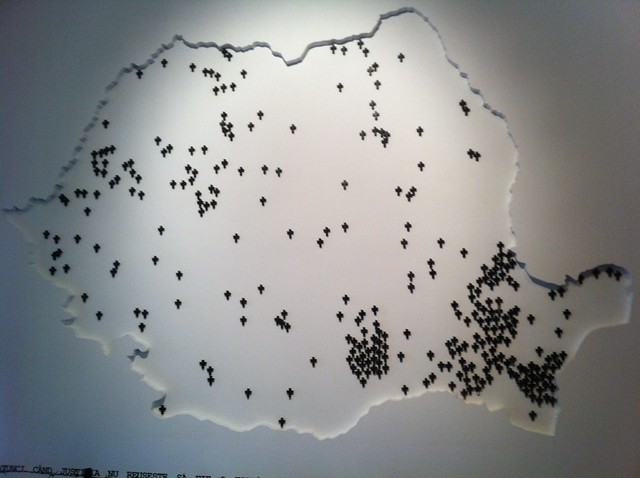 The memorial is built in one of the former prisons where political prisoners were kept. Each cell has become a museum room in which the main topics concerning communist repression, the destruction of the rule of law, and its replacement with a totalitarian system are traced in chronological order.

All stages of the communism installation are very well documented and presented. Starting with destroying all other political parties in order to have only one strong party, continuing with the repressions against the Church, the collectivization, the Security Police, destruction of the Romanian Academy, the repression of the culture and ending with families persecutions and demolitions of historical buildings and churches.

There is also a high importance given to the life in prison, an area which is also very well documented. The cell where Iuliu Maniu died, communication inside and outside the prison, art behind bars, poetry in prison, women in prison, intellectual life in prison manage to give you a clear view of what has happening behind the bars and what prisoners had to endure for years.

One of the components of the Memorial is the Paupers’ Cemetery, situated at a distance of two and a half kilometers, outside the town.  According to the legends of the time, it was here that a large part of those who died in the political prison were buried in secret at night.  It has not been possible to identify the graves among the thousands dating from before and after the 1950s, and so in order to commemorate the sacrifice of these victims a landscaped memorial was conceived in 1999.  Covering a surface are of 14,000 square meters of the cemetery, the outline of Romania has been traced.  Along this outline saplings (mainly conifers) have been planted.  As the juniper, fir, and spruce trees grow they will create a vegetal amphitheatre around a Romania-shaped forest clearing. 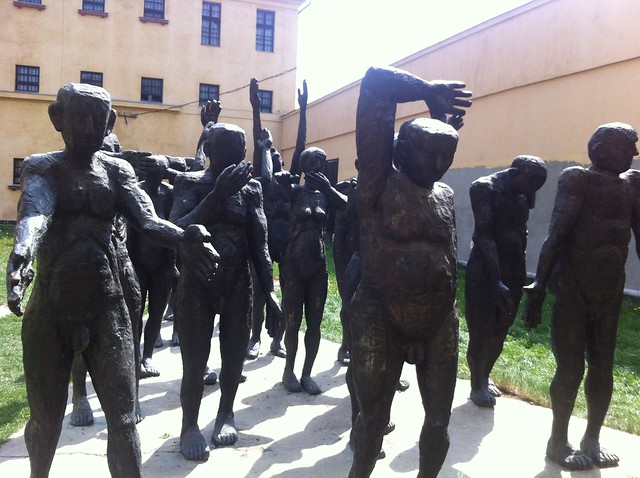 After the visit to the Memorial, our next stop was the Merry Cemetery. This is a unique place in the world, a true work of art, a proof of the traditions and customs in Maramures. The cemetery is famous for its colorful tombstones with paintings that represent the life of the buried and a funny poem describing the person who died. 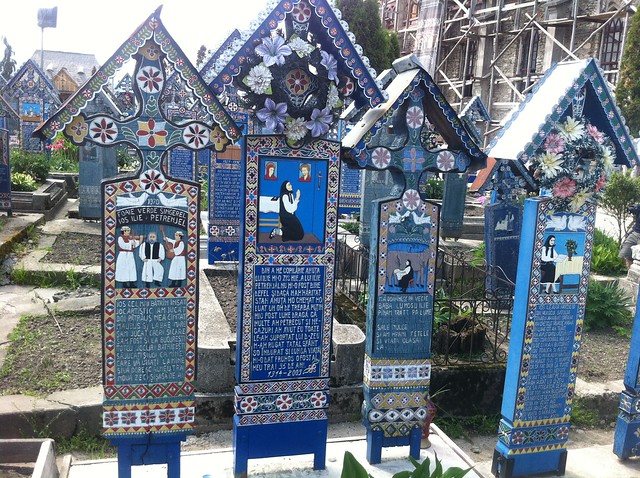 The thing about this cemetery is that death is not seen as something sad and solemn, like it is normally perceived. Death is seen as a natural step for a human being, and it is actually thought that the person who died is actually going to a much better place.

The paintings are unique and the poems are full of humor and sometimes sarcasm.

Close by the cemetery, we can also find the memorial house of the one who first started creating the tombstones, Stan Ioan Patras, so you can have a quick visit there as well. His apprentice, Dumitru Pop-Tincu is taking care of the house after Stan Ioan Pastras’ death and he is also creating even now on request tombstones, so the tradition is carried on.

For a Romanian the cemetery can be very funny and attractive, but you will need a lot of patience to read what’s written on every tombstone. For a foreigner, most probably it will not have the same impact, because you wouldn’t understand the poems, you would only admire the colorful paintings.

Our last day of the trip started again early and it was only dedicated to a quick visit to the Barsana Monastery and then head back to Cluj, where our trip initially started. The Barsana Monastery is a vivid evidence of the talent of the local craftsmen, an architectural work of art. Maramures is full of wooden monasteries, but most certainly the Brasana Monastery is one of the most representatives. 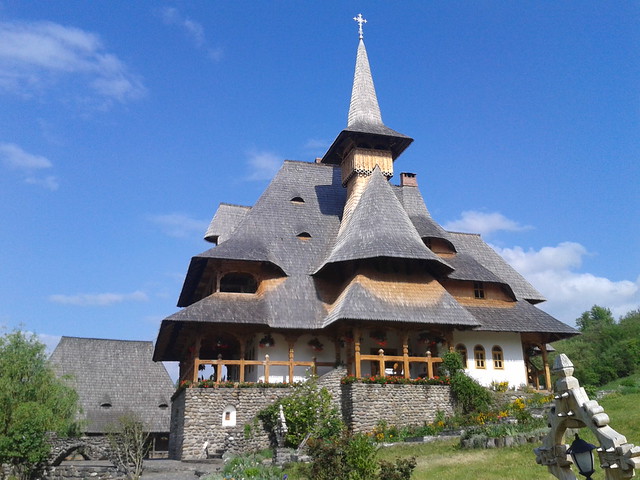 The church, which now stands on a small hill surrounded by an orchard, is one of the eight churches on the UNESCO World Heritage List. The Barsana Monastery is a statement of Maramuresean architecture.

I was impressed not only by the beauty of the wooden buildings, but also by the whole set up of the Monastery. You enter the gate and you just feel like you entered the most quiet, calm and relaxing place, where all worries just vanish, where your thoughts become better and you feel lighter.

On our way back to Cluj Napoca we passed by lots of traditional villages, with old wooden houses, with people selling traditional clothing, manually sewed. There are two very nice things that I noticed and I documented a bit more on the subject.

The wooden gates support the entry in the yard of the Maramures houses. Supported by three columns, they feature traditional ornamental motifs, including the sun and the twisted rope – both symbols of life and continuity. Some of the most beautiful wooden gates are found in the villages of Vadu Izei, Desesti, Giulesti, Budesti, Sarbi, Barsana and Oncesti. The villages of Barsana and Oncesti have, perhaps, the greatest number of impressive gates. (http://www.romaniatourism.com/maramures.html).

Another thing that caught my attention was the fact that for some houses, in the yard you could see cooking pots hanged on the branches of the trees. It seems that families who do this have daughters who have reached the age of marriage and are in search of a husband.

So this was our trip to the lovely Maramures, the place of wooden churches, impressive landscapes and ancient customs. A place where traditions, culture and lifestyle of simple village people is very well preserved and available for you, to admire and enjoy.