The last two days of our trip in Italy were a bit different that the first ones as we left the quiet and relaxing Cinque Terre for Florence and Bologna, with crowded streets, lots of noise, but still with great arhitecture and attractive spots.

Florence breaths history thorugh its buildings. Everywhere you look you see churches, castles, ancient buildings and old statues. The Dome of Florence is absolutely impressive. I tried to catch it all in a photo, but it is too big to even catch it with your eye. Florence’s cathedral stands tall over the city with its magnificent Renaissance dome designed by Filippo Brunelleschi. The cathedral named in honor of Santa Maria del Fiore is a vast Gothic structure built on the site of the 7th century church of Santa Reparata, the remains of which can be seen in the crypt.

The Palazzo Vecchio  is the town hall of Florence. This massive, Romanesque, crenellated fortress-palace is among the most impressive town halls of Tuscany.Overlooking the Piazza della Signoria with its copy of Michelangelo’s David statue as well the gallery of statues in the adjacent Loggia dei Lanzi, it is one of the most significant public places in Italy.

The Ponte Vecchio is a Medieval stone closed-spandrel segmental arch bridge over the Arno River, noted for still having shops built along it, as was once common. Butchers initially occupied the shops; the present tenants are jewellers, art dealers and souvenir sellers. The Ponte Vecchio’s two neighbouring bridges are the Ponte Santa Trinita and the Ponte alle Grazie.

Designed in 1869 by Florentine architect Giuseppe Poggi, Piazzale Michelangelo offers panoramic views of Florence and the Arno valley and is a popular spot with locals and tourists.

The Piazzale Michelangelo is dedicated to the city’s most famous Renaissance artist Michelangelo Buonarroti. At the center of the square stands a replica of his most famous statue, the David. The bronze statue is set on a large pedestal, decorated with replicas of allegorical statues depicting day, night, twilight and dawn.

The square is well worth a visit thanks to the magnificent views over the city of Florence with the Tuscan hills providing a scenic backdrop. You have a clear view of a number of the city’s most important landmarks, including the Duomo, Ponte Vecchio and Palazzo Vecchio. 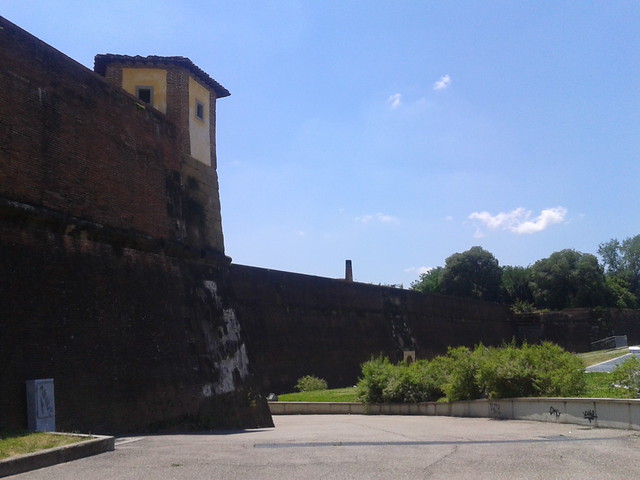 This was the half-a-day visit in Florence, really hot and crowded, but we did find a nice place in the old town to relax for dinner.

Next day we went to Bologna and wondered on the streets for a couple of hours until we headed to the Airport and back home to Romania.

This was our 5 day trip to Italy this year, with lots of nice places, with many kilometeres of walking, being tired, but still amazed of what was happening around us.