We spent 5 incredible days in Morocco and the story is sooooo long, that I had to split it somehow. We drove almost 2000 kilometers around the country and what we saw during this time just has to be told.

Morocco seen from the ferry

We took a ferry boat from Algeciras, Spain to get to Tangier in Morocco, where our guide would wait for us with the car and where we would start and end our journey. First time we put our feet on the African continent. We left home with some ideas about the country, but I can tell for sure that we came back home with totally different ones. But one step at a time. 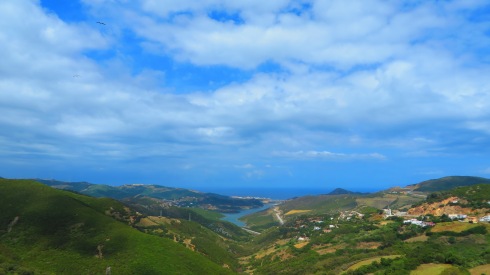 Morocco has a population of over 33 million and an area of 446,550 km2 (172,410 sq mi). Its political capital is Rabat, although the largest city is Casablanca; other major cities include Marrakesh, Tangier, Tetouan, Salé, Fes, Agadir, Meknes, Oujda, Kenitra, and Nador. A historically prominent regional power, Morocco has a history of independence not shared by its neighbours. Its distinct culture is a blend of Arab, indigenous Berber, Sub-Saharan African, and European influences.

Going in Morocco in May actually turned out to be a very good decision. The weather is still fine, we had around 25 degrees and sun, so it wasn’t hot enough to just feel like we cannot breathe anymore. In the southern part of the country there were around 33 – 35 degrees, still a temperature that we are used to in Romania during summer time. The guide told us that if we had come one week later, the temperature would have gone up to 45 degrees and then it would have been a bit to hot for our comfort. 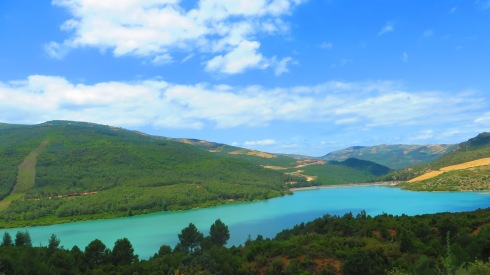 I left home with the false impression that Morocco is a poor country, with no vegetation and mostly deserted. But driving on the roads for 5 days made me reconsider this. Especially in the northern part of the country, the landscape is absolutely beautiful. As mentioned before, we started our journey from Tangier, which is the main city in the Mediterranean Morocco. This northern part of the country is also one of the richest as well. Here you have the main ports that make connections with Europe and also the main touristic destinations, with five-star modern hotels and beautiful sandy beaches.

Going further, after a quick stop for lunch in some sort of restaurant (I will tell you more about the Moroccan cuisine in a future post), we got in the Middle Atlas region of Morocco. The Middle Atlas is part of the Atlas mountain range lying in Morocco, a mountainous country with more than 100,000 km² or 15% of its landmass rising above 2,000 meters. The Middle Atlas is the northernmost of three Atlas Mountains chains that define a large plateaued basin extending eastward into Algeria.

The Middle Atlas is a solid mountainous mass of 350 km in length in the north-east of Morocco with a unique charm. Its biodiversity, both in fauna and flora, make Middle Atlas a significant tourist destination. Over the mountain slopes, extensive forests of cedar spread, intersected by deep valleys. Bordered by the rich Plaine du Saïs and the cities of Fes, Meknes and Beni Mellal, the mountainous reaches of the Middle Atlas are the stronghold of Berber tribes, speaking Tamazight and living at very low population densities.

In this area of the country we did visit the cities of Meknes and Fes, but I will tell you more about that in a future post about the cities of Morocco. We did also stop for about an hour to make a tour of The Archaeological Site of Volubilis, the ruins of a Roman city in Morocco.

Built in a fertile agricultural area, it was developed from the 3rd century BC onwards as a Phoenician (and later Carthaginian) settlement. It grew rapidly under Roman rule from the 1st century AD onwards and expanded to cover about 40 hectares (100 acres) with a 2.6 km (1.6 mi) circuit of walls. The city gained a number of major public buildings in the 2nd century, including a basilica, temple and triumphal arch. Its prosperity, which was derived principally from olive growing, prompted the construction of many fine town-houses with large mosaic floors. 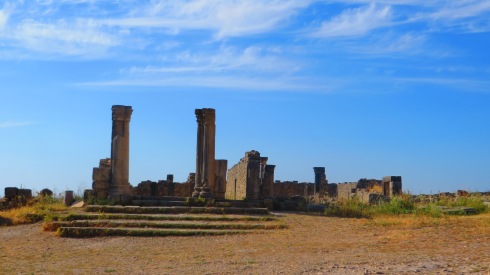 The town fell to local tribes around 285 and was never retaken by Rome because of its remoteness and indefensibility on the south-western border of the Roman Empire. It continued to be inhabited for at least another 700 years, first as a Latinised Christian community, then as an early Islamic settlement. In the late 8th century it became the seat of Idris ibn Abdallah, the founder of the Idrisid dynasty and the state of Morocco. By the 11th century Volubilis had been abandoned after the seat of power was relocated to Fes. Much of the local population was transferred to the new town of Moulay Idriss Zerhoun, about 5 km (3.1 mi) from Volubilis. The town is visible from the Archeological Site and can also be visited.

Being in the Atlas Mountains we just couldn’t pass by without having a quick stop at the funny monkeys.

The Barbary macaque, Barbary ape, or magot is a species of macaque unique for its distribution outside of Asia and for its vestigial tail. Found in the Atlas Mountains of Algeria and Morocco and El-Kouf National Park in Libya along with a small population of unknown origin in Gibraltar, the Barbary macaque is one of the best-known Old World monkey species.

The Barbary macaque is of particular interest because males play an atypical role in rearing young. Despite uncertain paternity, males are integral to raising infants. Generally, Barbary macaques of all ages and sexes contribute in alloparental care of young.

We saw the macaques in Azrou on the side of the road. They are friendly if you give them something to eat, otherwise they will ignore you. 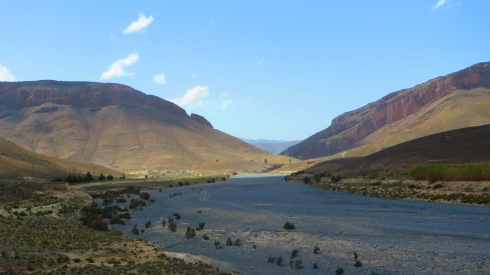 The High Atlas rises in the west at the Atlantic Ocean and stretches in an eastern direction to the Moroccan-Algerian border. At the Atlantic and to the southwest the range drops abruptly and makes an impressive transition to the coast and the Anti-Atlas range. To the north, in the direction of Marrakech, the range descends less abruptly.

The range includes Jbel Toubkal, which at 4,167 m is the highest in the range and lies in Toubkal National Park. The range serves as a weather system barrier in Morocco running east-west and separating the Sahara’s climatic influences, which are particularly pronounced in the summer, from the more Mediterranean climate to the north, resulting in dramatic changes in temperature across the range. In the higher elevations in the range snow falls regularly, allowing winter sports. Snow lasts well into late spring in the High Atlas, mostly on the northern faces of the range.

In this area of the country we had a quick stop in the beautiful city of Tinghir and the spent the night in the Todra Gorges. The city of Tinghir has a population of 36,000 and the area has 86,500 inhabitants, according to the 2004 census. The predominant ethnic group is Amazighs, and the city is at the center of one of the most attractive oases in southern Morocco. Lush palm trees cover about 30 miles (48 km) on 500-to-1,500-metre wide tracts along the Wadi Todgha.

How the cities look in Morocco is on the things that surprised me from the beginning. My definition of city seems to be totally different from the Moroccan one. As I imagine high buildings and crowded streets with cars and people, here we have houses built of some sort of mixture of rocks and water (not even bricks) and not too many cars.

Right outside the city of Tinghir, the beautiful Todra Gorges rise. 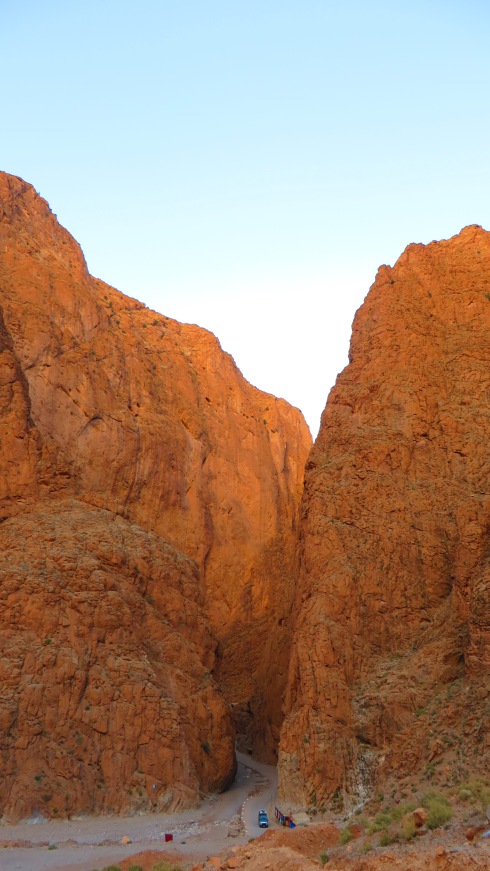 Todra Gorges is a canyon in the eastern part of the High Atlas Mountains. Both the Todra and neighboring Dades Rivers have carved out cliff-sided canyons on their final 40 kilometers through the mountains. The last 600 meters of the Todra gorge are the most spectacular. Here the canyon narrows to a flat stony track, in places as little as 10 meters  wide, with sheer and smooth rock walls up to 160 meters high on each side. 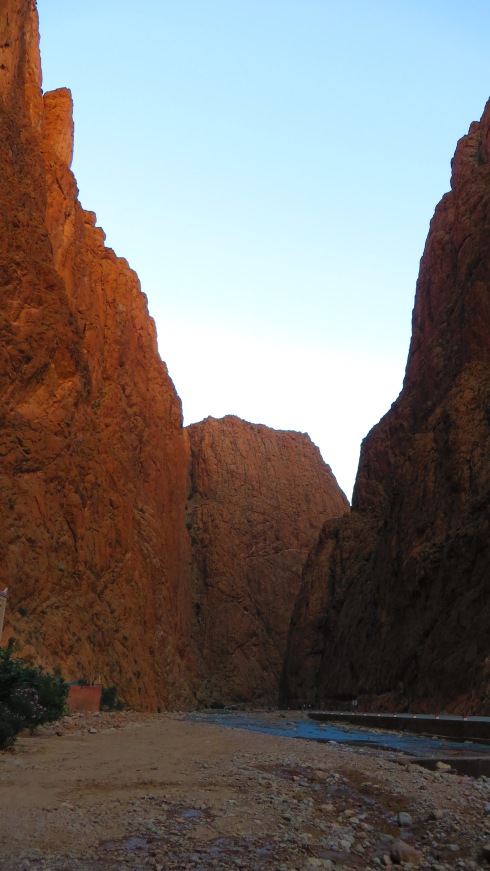 From here onwards we continued our journey to the desert were we spent one incredible night. About this in another post, to give you all the details needed. After leaving the desert we passed by the beautiful Ziz Valley, which is now full of dates trees, surrounded by small villages. 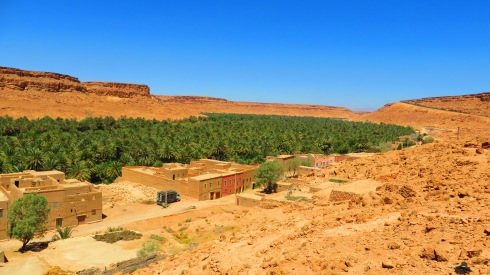 These were the main stops we had during our 2000 kilometers trip around Morocco, excepting the desert and the cities about which I will tell you more soon. We managed to see the north and a bit of the south-eastern part of the country (Mediteranean Area, Midlle Atlas Area, a bit of High Atlas Area and the Saharan Area), leaving the other half for a future trip. What I liked about Morocco is that everywhere you looked and there was a fertile soil, people took advantage of that soil. Whether it was olive trees, orange trees, grains or dates and fig trees, they had it. 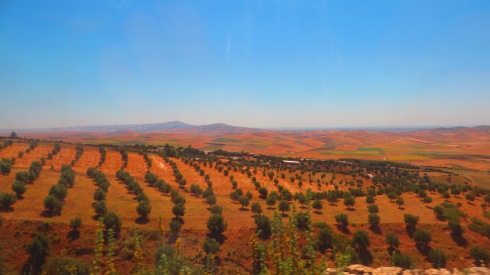 Agriculture is one of the main sources of income in Morocco and many people make a living out of it. 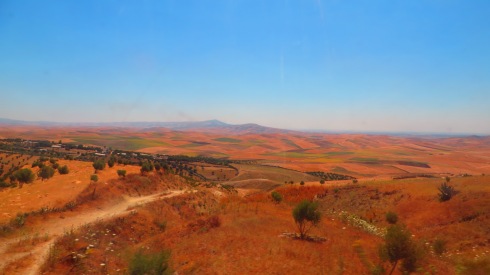 I can say for sure that Morocco is really worth seeing like this, having a road trip and stopping from time to time to just enjoy the view. Going only to visit cities will for sure give you the wrong impression about this country and I will explain myself later on on this topic. Morocco has an extraordinary natural beauty, with valleys, mountains and the desert that just cannot be seen between the walls of a city. It’s quite a big country and driving for days in a row can become exhausting, but each time you get to a new place and discover it, you understand that the effort was very much worth it.

Wildlife and nature are still quite well preserved and Morocco knows to present it to the tourists.