The Moroccan cuisine is one of the top touristic attractions when visiting the country so, for a gourmand like me, a post about it seems just right.

Moroccan cuisine uses herbs and spices in abundance, that give each dish a special taste. Saffron, turmeric, ginger, mint, cinnamon, sesame seeds are just some of them, used in dishes, regardless if we are talking about a main dish or desert. Meat is also used in most of the dishes, from beef to lamb or mutton or even camel. Pork is the only meat they don’t use as the religion forbids them to eat it.

Every meal starts and ends with a mint tea.

It has a strong taste of mint, as they use fresh mint leaves and it is in the same time, if drank hot, a beverage that will help you digest and also chill a bit from the heat outside.

As an appetizer, until the main dishes are ready, you always get a bowl of olives. Olive cultivation is at the heart of Moroccan cuisine and culture, Morocco being the second largest producer of table olives and the sixth of olive oil.

A traditional meal normally starts with a salad or a soup. Salads are a mixture of vegetables, both raw and cooked. 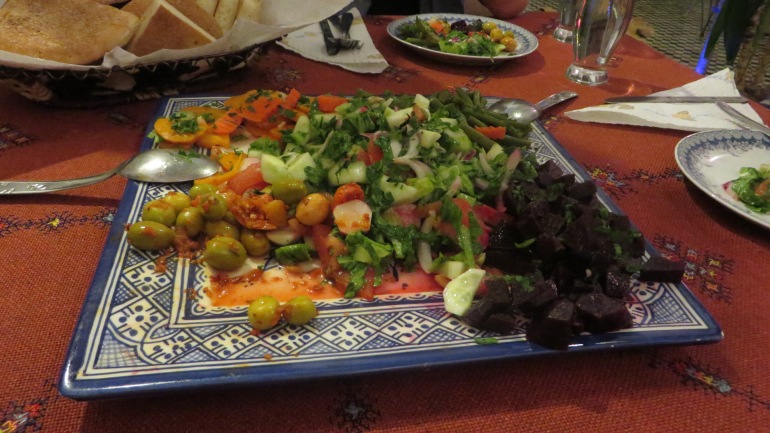 Soups are normally with no meat, only vegetables. We only had lentil soup, but it is a bit different than the one we were used to so far. We only had a sort of lentil cream soup, but this one has the whole lentil grains boiled with other vegetables and with lots of herbs and spices that give it the perfect taste. 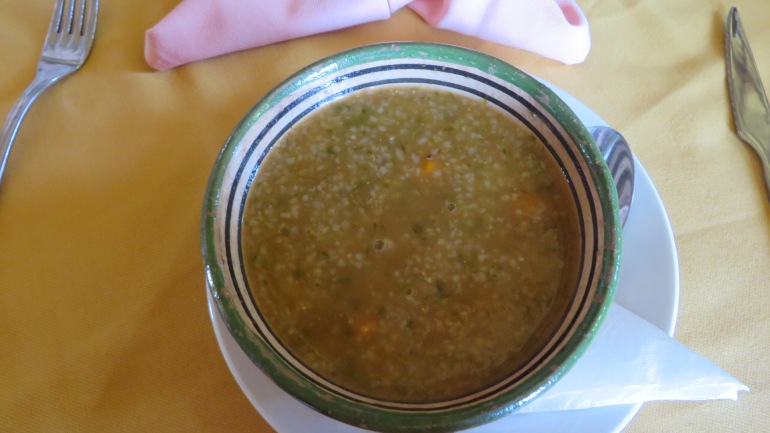 The main dish is normally based on meat and vegetables. Some of the main dishes that we tried are:

Tanjine : The name is given because of the bowl it is cooked in.

It is normally made with lamb meat or chicken meat and vegetables in the oven.

Tajines are also made with couscous and vegetables.  It is normally served with 7 vegetables, but can also have meat. 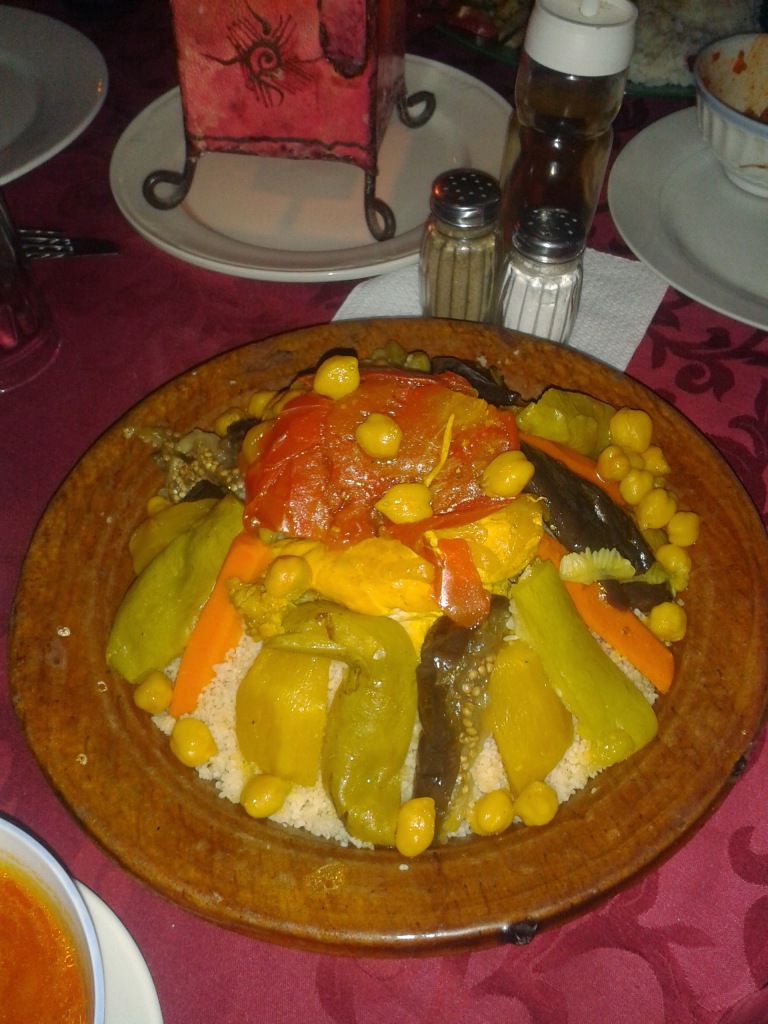 Kebabs : Kebabs are also quite common in the Moroccan cuisine, made of chicken meat, served mainly with rice, vegetables or fries. 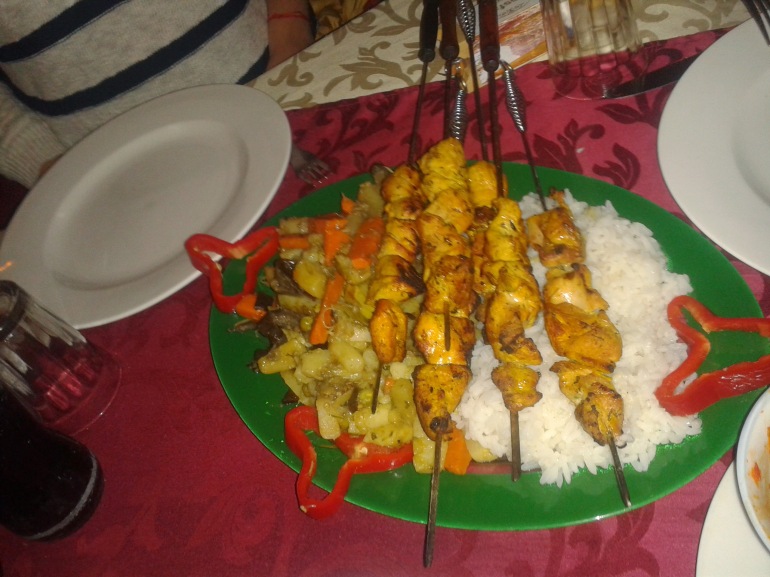 Mrouzia: Mrouzia is a sweet dish of lamb with raisins, almonds and honey. I really enjoyed this one, the mix of lamb with sweet fruits really gives it a special flavor. 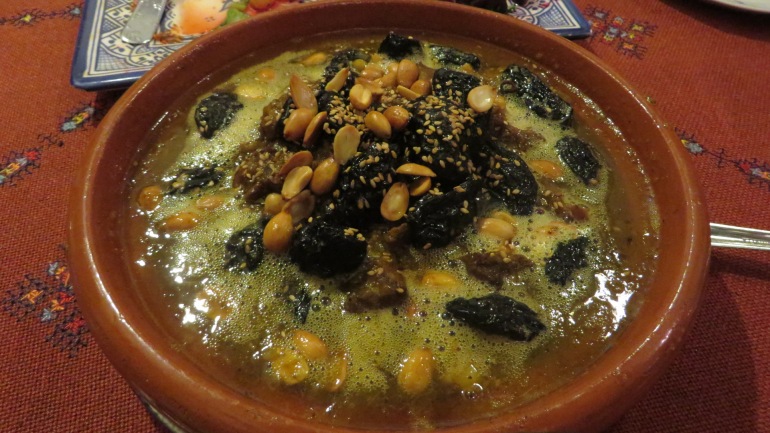 Kafta Mkawra: This dish is a tajine with 20-25 small meatballs in tomato sauce with eggs on top. The traditional meat is lamb, but beef can be also used. You can miss the vegetable or the side dish from Kafta, so it is served with plenty of warm bread. 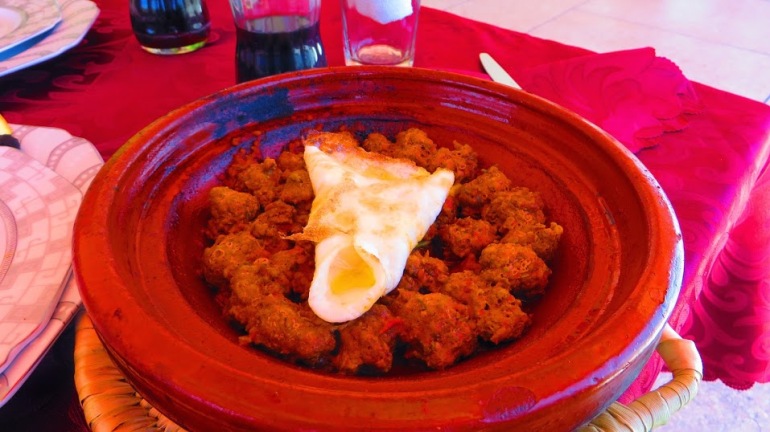 Pizza Berbere : Well, this was actually my absolute favorite dish from the trip in Morocco. It actually look more like a pie, rather than pizza, but still I found it absolutely delicious.  It’s a pie stuffed with a mixture of meat and vegetables and spices that give it the perfect flavor.

Bread is served mostly all dishes and is an important part of a meal. As normally Moroccans eat with their hands, bread is also used as an utensil.

Beside mint tea, that is can be found everywhere, in some places they have coca-cola and if you are lucky, in more touristic places, Casablanca, the local beer, which is quite good. Being a Muslim country, beer, and alcohol in general, it’s not easy to find and when you find it is quite expensive (10 euros for a Casablanca in the restaurant and 3-4 euros in the supermarket). 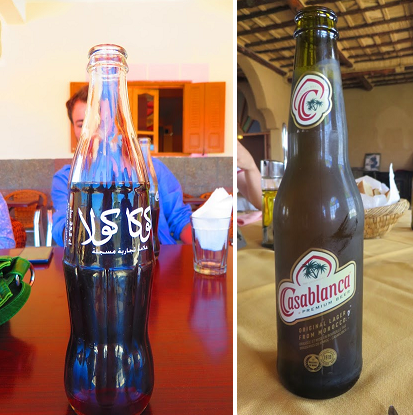 For desert, we normally would get fruits and once we got this desert that seemed to be stuffed with chicken inside, not sure exactly how it’s called.

This was what we tried during our 5 days trip in Morocco. For every meal it was just too much, we were always full after finishing eating. We normally ate breakfast and dinner in the Riads where we had our accommodation and lunch in different restaurants on our way.

Most important when going to Morocco is not to drink water from the tube, always buy bottled water. This is what every tourist is advised to do, otherwise you will have serious stomach problems. Also, pay attention to the ice cubes, those are also made from water from the tube, so same story. No need to worry for the boiled water in the mint tea, once it’s boiled it’s harmless.

As for the prices…well, it was an average of 10 EURO per meal, but we never knew for sure the exact price as there was never a menu to chose from. Our guide always suggested something and we went for that. He was also the one who told us how much the meal cost.

Moroccan cuisine is definitely something that has to be tried when visiting this country. I enjoyed every part of it and liked every dish we had. I liked that they have vegetables with meat, that they eat fruits and that they always have olives as a starter and tea in the end. It’s a tradition and it’s a part of their culture. Everything from how the food is prepared to how it’s eaten is a trademark of this country.