It has been almost one week since I came back from Istanbul. I am at my 3rd Turkish coffee today and I still can’t figure out how to start my article on Istanbul. I always find it hard to start writing, especially when I want to write about something that I feel must be shared. I wrote an introduction for this text about three times already, and every time I stopped, unsatisfied, only to continue to do something else: reading “Life of pi”, looking at some of my photos and realizing that only 10 out of 300 are really good. But that’s beside the point right now.

Well, I guess there’s no way around it, so I might just start at the beginning.

First of all, it’s only fair to say that I was in Istanbul for 4 days with business. I say it’s fair, because, as some of you may already know, it is different when you go to another country on business and not on vacation. You don’t have the time to visit all that you want to visit. Lucky for me I had to shoot for a small movie about Turkey, so I had the chance to visit all these places that Turkey is famous for.

First day in Turkey: I’m on my way to the hotel and already I can understand why everybody told me that the traffic in Bucharest is a piece of cake compared to Istanbul. But, unlike Bucharest, in Istanbul you don’t sit still in just one place for so long. You sit still a little in lots of places.

We finally arrive at the hotel and we check in. I stayed at Holiday Inn Sisli. If you can afford to pay 140 euros a night, Holiday Inn Sisli, located in the business sector, is a good place to stay. But I am sure you can find cheaper accommodation while you’re in Istanbul. I will probably know more about that when I will come back to Istanbul, on vacation. So, day one and I have to go to a business meeting with the production house we hired for the movie. Everything goes smoothly and we finish in a couple of hours. After the meeting, my Turkish colleague, Ragip, makes us an offer we can’t refuse: walking around the area after having a glass of Turkish tea. He takes us to a stylish Turkish coffee-shop were we meet 2 of his best friends: Nalan, 50-something-year-old woman who’s spirit is as young as that of an enthusiast 23-year-old and who is also Ragip’s editor, and Gokay, a 20-something young Turkish man who is also my colleague’s partner in writing (Ragip writes movie/theatre/opera/book reviews). After having the promised glass of tea, we walk around the area. It is one of the richest areas of the city, with shops such as Christian Laboutin, Alexander Mcqueen or Prada, to name just a few. The coffee-shops there are just like the neighborhood: posh, without losing their Turkish atmosphere. After a 20 minutes’ walk, we were on our way to having a Turkish dinner at Hamdi Restaurant . Besides the local cuisine, which was excellent, what I liked most about this restaurant was the amazing panoramic view, thanks to the floor-to-ceiling glass windows that give this airy space the feel of a greenhouse. Don’t ask me what I ate, I trusted my Turkish colleague with that task, and he did very well, I might add. I do know what I drank, however: raki – a Turkish unsweetened, hard alcoholic drink that is popular in Turkey. It tastes just like the Greek drink, Ouzo. 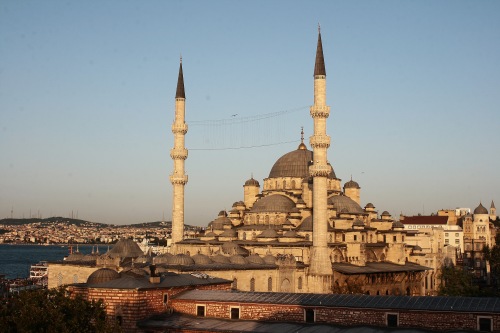 The next day was all about shooting in Istanbul’s business sector. The reason for which I was in Istanbul, like I said, was because I had to make this movie for my company about Istanbul, and Istanbul is about the East meeting the West, is about the traditional way of living coexisting side by side with the modern way of living, is about stores labeled “Armani,” “Gucci,” “Vuitton,” “Dior” placed near coffee-shops where you can drink the traditional Turkish tea or coffee and have a “narghilea” while, from time to time (five times a day) you can hear the ezan (the call to prayer). This city is where the Islamic world meets the European world, serving as a bridge, both metaphorical and literal. So, a movie about Istanbul meant a movie about modern Istanbul, also. That meant a movie about Istanbul’s business sector where, besides all the posh stores, you can also find all these malls illuminated with bright colors. Not my cup of Turkish tea, but I do admit there was one aspect that I enjoyed: the view from the roof of Europe’s fifth tallest building. Sapphire is a skyscraper, and as of 2011, the tallest building in Istanbul and Turkey, located in the central business district of Levent. Just have a look.

But what I enjoyed the most was the third day, because, on that day, we had to shoot the traditional Istanbul. 7 o’clock in the morning and off we go to the Galata Bridge, one of the busiest bridges I ever did see. The traffic there is enough to discourage you to go anywhere in that city by car, if you are not an Istanbulian, because, for them, it’s just business as usual. Then we headed to Grand bazaar, one of the largest and oldest covered markets in the world. Most of you probably already know that the Turks are famous, among other things, for their beautiful examples of mosaic art. This is what Grand bazaar is:  an overwhelming mosaic. All these people, all these colors, all these things (whether jewelry, Mosaic Turkish lanterns, pillows, Turkish coffee, Turkish tea, tea sets, coffee sets, plates, fabrics with amazing patterns, Turkish rugs, spices, or Turkish delights) all under the same roof. It is hard to find the right words to describe this place. It is why I use photos in such cases.

But the place I was most impressed with was Balat, the traditional Jewish quarter in the Fatih district of Istanbul. Today Balat is a working-class district, mostly inhabited by gypsies. Like most people, I am a very visual, but there are certain images that I prefer. I call them “images with personality”, “images with character”. I found a lot 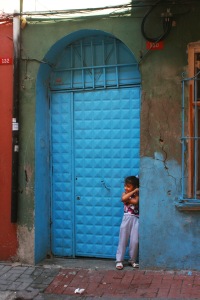 of those in Balat. When you walk under the clothes lines hanged between two houses and see small children playing in the streets, you cannot help but smile, and, as a photographer, take lots and lots of photos. I was surprised with the architecture of the district; I could visualize something of Jerusalem (as seen at TV or in photos) and some of old Istanbul. Going slowly through the dusty and old houses and raising your head is the way to experience Balat. Although, as I understand, now it is only a shadow of itself, Balat is one of the hidden jewels of Istanbul.

After Balat, we went to Istanbul Museum of Modern Art. Talk about two sides of the same story! If, on one hand you have the traditional, old Istanbul, the Museum of Modern Art is a refreshing alternative for those who want to see a piece of the ‘new Istanbul.’ Founded in 2004, Istanbul’s largest contemporary art museum is the first of its kind in the city and is well worth a visit. It is here that I found the Turkish artist Burhan Dogancay, one of the most important Turkish artists from the

twentieth-century, whose work revolves around the observation of the walls of cities which he has visited during his life. The impression left on him by these walls at the time he looked at them, was later materialized in the form of paintings, prints, photographs, tapestries and sculptures.  If you have the time, I recommend visiting the museum. It is worth your time and I can guarantee you that Burhan Dogancay’s perspective as an urban traveler will not leave you indifferent. We finished with the shooting and I went to the voice recording studio, but I won’t bore you with that. Let’s just say that the ending of this third Turkish day was mostly about teaching English pronunciation to my colleague (I didn’t do a very good job, but considering that in the Turkish schools they don’t teach a second language, he did a decent job) and having Turkish coffee.

My last day in Istanbul was mostly about movie editing and some Turkish coffee… again.

Before leaving Istanbul I promised myself I will come back, but next time on vacation. There are so many other experiences that I probably didn’t mention here (they will most certainly come back to me after publishing this post), but this is why I love photography, and especially travel photography.