[Romania] The hidden wonders of the Apuseni Mountains

9 nice people, 4 lovely days, 7 amazing caves, a breath-taking view and a great time! This is what happened at the end of June, when we had a long road trip to explore the caves of the Apuseni Mountains of Romania.

The Apuseni Mountains is a mountain range in Transylvania, Romania, which belongs to the Western Carpathians, also called Occidentali in Romanian. Their name translates from Romanian as Mountains “of the sunset”. The highest peak is “Cucurbăta Mare” – 1849 meters, also called Bihor Peak.

These mountains have a karst nature that allowed rivers to create amazing canyons and incredible caves. The Apuseni Mountains hide about 7000 caves, most of them not totally explored yet. From these only around 10 can be visited by tourist, but these few do manage to make you feel like you have entered another world, a hidden world of treasures and wonders like never seen before.

We started the trip on a Friday afternoon, leaving from Sibiu, for our first stop, the village Garda de Sus, where we would stay for the night. We found a very nice cabana, called Casa de Piatra. The hosts were very friendly, offered a lot of information about the surroundings and made our stay were enjoyable, even if it was only for one night.

The night and the moon offered us a beautiful scenery, while relaxing on the terrace of the cabana.

The temperature in the cave is very low, around 0.5 degrees Celsius, so get some warm clothes with you when visiting.

Scarisoara Cave is 750 m long, but only 250 m of it can be visited, the rest being open only for speologs. It’s 110 m deep, the entrance shaft is 50 m in diameter and 48 in depth and the access for tourists is done through a metallic ladder. The glacier has a volume of 75000 cubic meters and it is 26 m high. 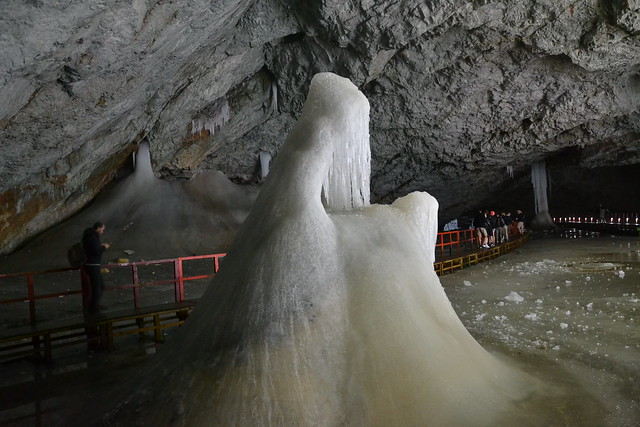 The entrance fee is 10 lei and it is open from Tuesday to Sunday from 9.00 AM to 5.00 PM. Still, during the summer time, as there are lots of tourists coming in the area, most of the time it is open Mondays as well. The cave is situated in the Garda de Sus village, there are signs from the main road, so the access to it is very easy. From the parking place, you will have to walk about ten minutes to the cave.

The next cave on the list was Poarta lui Ionele (The Gate of Ionele) cave. It’s a rather small cave, only about 131 meters long, with a small river coming out of it. If it’s a very rainy season and a very snowy winter, a lake forms inside the cave.

The cave is situated on the valley of the Ordancusa River that offers a very nice view. But the actual attraction of this cave is not how it looks like, but rather the 300 hundred bats that live inside it. There is a guide who will tell you all about the cave, the bats and their habits of living. The tour of the cave takes only about 20 minutes and it’s open as the other ones from Tuesday to Sunday from 9.00 AM to 5.00 PM. 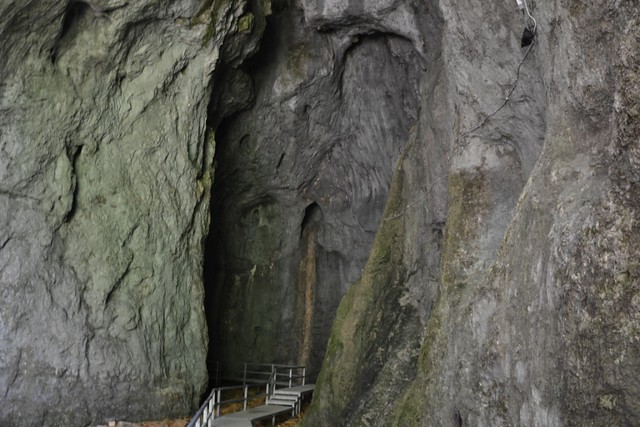 The last cave we visited on Saturday was actually the one that impressed us the most for the first day of the trip, The Ursilor Cave (The Bear’s Cave).

Bears Cave dwells an extraordinary range of stalagmite and stalactite formations varying in size and forms as well as a lot of like marks and fossils of cave bear – Ursus Spelaeus – which disappeared more than 15,000 years ago. The Bears Cave is 1 km in length. It is disposed on two-overlapped levels: one which is superior having 488 m in length, fitted out for tourist reasons and an interior one, temporarily active, having 521 m in length, being considered scientific reservation.

The name of the cave is due to the numerous bear fossils, which were found there, so therefore it represented a favorable place for shelter for the animals that used to live there 15000 years ago. Owing to the falling of a huge rock, the mouth of the cave was blocked and more than 140 bears were trapped inside. Being hungry, the bears attacked one another until they all died.

What this cave offers cannot actually be described in words, one can only understand if visiting it. It’s incredible how water eroded the rocks for thousands of years and created this amazing place. It feels like we entered a fairy tale, with sceneries of a world that existed sometimes in ancient times with mythological creatures, with spells and wizards. 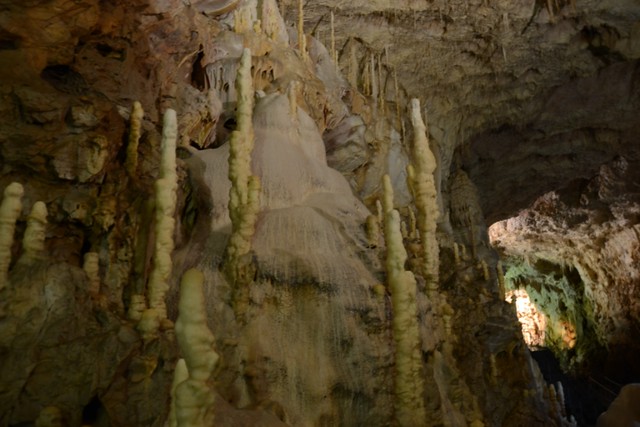 The Ursilor Cave is situated in the Chiscau village, in Pietroasa Commune, Bihor District and has the same opening hours as the other ones. The guide is very friendly and if the group is small he takes more time to explain and to answer questions. The temperature in the cave is again very low, around 7 – 10 degrees Celsius, so again have some warm clothes with you, because the visit takes about 40 minutes.

First day of the trip ended after the visit to the Ursilor Cave and we headed, a bit tired, to our next stop for the night, in the Padis village, Pensiunea Apuseni. Not too much to say about it, it was actually a last option, as we didn’t find anything else available. Clean and with nice staff, but nothing too traditional and cosy.

Sunday morning we woke up again early, had breakfast and headed in the direction of Glavoi Glade from where we would start hiking to Cetatile Ponorului (The Fortress of Ponor). This trip was the cherry on the cake for us. It was an adventure we experienced, it was difficult some times, but the joy of succeeding was the best.

Exploring the Cetatile Ponorului cave was not in our plan, but a nice couple, with more experience than us, convinced us that it’s something we must do since we got there and that it’s going to be something legendary, like never seen before. So with a bit of their help, we entered the cave, without knowing what we will find inside.

And yes, it was absolutely spectacular, we have never seen something like this and most probably we will not see something similar in the near future.  The river made its way in the cave creating high rooms. We had to jump from rock to rock and try not to get wet as the river floods the entire floor of the cave. We didn’t manage to keep our feet dry until we got out of the cave, but still it was a nice feeling to get in touch with the cold-cold water. There were small waterfalls with water flowing directly from the cave’s walls. I felt like I was an explorer and it was the first time someone got in this cave, like we have just discovered it. 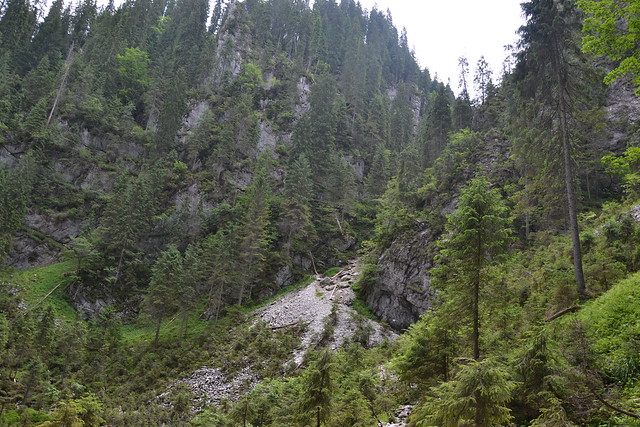 It took us about an hour to go from one part to the other part of the cave and it was quite an effort. It’s not a good idea to go in without a proper equipment (at least some tracking boots and a light). You can easily get injured, as the rocks are all wet and you can slip, but still, this should not stop you from taking this amazing trip.

From the Glavoi Glade you get to Cetatile Ponorului in about 2 hours and it’s a marked hiking path, so you cannot miss your destination. Make sure to take water with you as you will not find any water source on the way, except for the river in the cave, but I’m not sure if it’s a good option.

Very close to Glavoi Glade is Ponor Glade, a very beautiful and peaceful place. It’s a good place to just go and relax in the sun, watching the green grass and the horses running wild there.

For Sunday this was all that we did. It was in fact a full day, considering the driving to the Glavoi Glade, the hiking to Cetatile Ponorlui, a nice lunch in the woods, hiking back to the place we left our car and driving to the next destination, the village Suncius. In Suncuis we stayed for the night at the Ciunta Caban, a very old and traditional house, somewhere very remote, without any noise or people around us.

Monday was our last day of the trip and we still had 3 caves on the list to visit. We started with the Unguru Mare Cave, which is located in the Suncuius village. It has an opening of 27 meters and it is one of the caves in Romania where explorers have found human traces. We only spent about 15 minutes in the cave, as the part that can be visited is not too big. 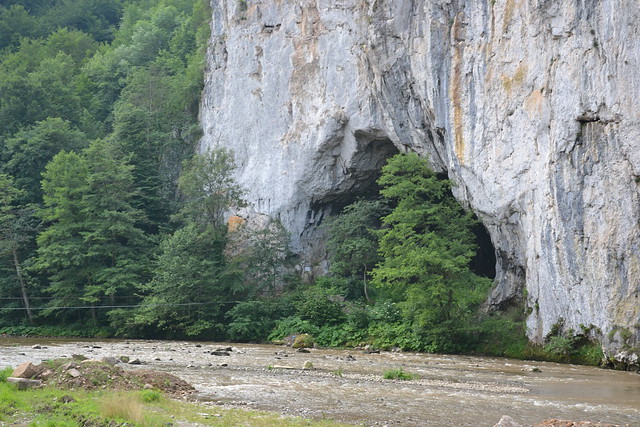 The Cristals Cave from the Farcu Mine was the next stop, a cave that offered us something that we have never seen before, a rare phenomenon that exists in so few places of the world. The cave is full of crystals, everywhere you look. Together with the stalagmites and the stalactites, crystals were formed that offer a special sparkle to the cave.

The cave is situated in the Rosia village and the tour takes only about 30 minutes. But once you get in, you will never come out the same after seeing this beautiful thing that nature has created for us. 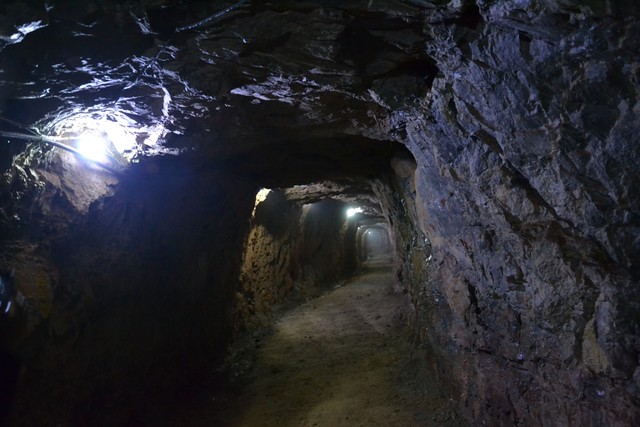 The Meziad Cave was the last one we visited before going back home. The cave is situated 22 km from Beius (in the Meziad village) and is the longest cave in the country that can be visited by tourists. It has about 6 kilometers long and tourists can visit more than 1 kilometer.

The cave is absolutely impressive with its large rooms and incredible stalactites and stalagmites. Perhaps the most appreciated by visitors is the cave area where the two underground levels are one over the other (overlap one another in an 8 shape), in the so-called Podul Natural (Natural Bridge) portion, where the cavern is up to 35 meters.

The guide that offers the one hour tour of the cave has some very nice stories of the different shapes the stalactites and stalagmites have got : the sphinx, the oven, the dwarfs and Snow White. 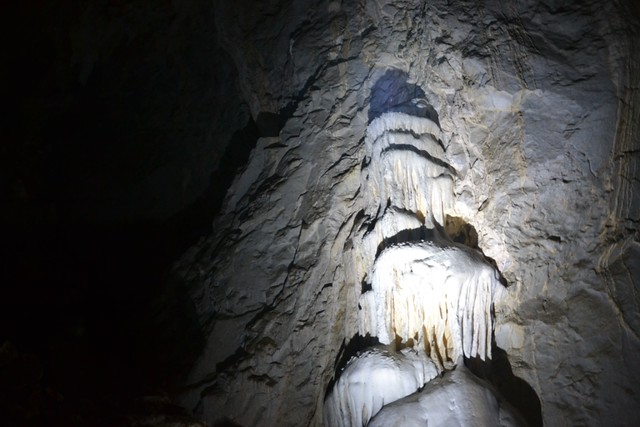 So this was our 4 days trip in the Apuseni Mountains. Actually under the Apuseni Mountains, considering the time we spent in all these caves. We came home so tired of all the effort over these days, but happy with what we experienced, with all the amazing places we visited, with the friends that we gained.