Or better yet… very, very, very hot Cordoba. We visited Cordoba in June, part of our Spain and Portugal summer trip and we spent there about 24 hours. We did manage to survive the summer heat (although in some parts of the town, it seemed as we were the only crazy people actually trying to do some sightseeing) and we discovered an absolutely beautiful Spanish town, so simple and colorful, full of culture and life. 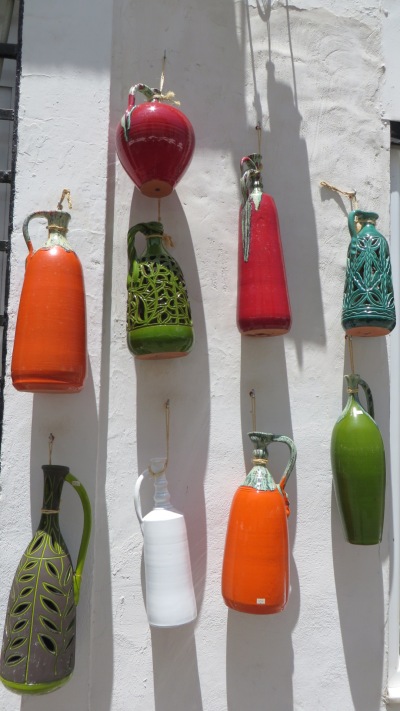 Cordoba is a mid-sized city of 350,000 inhabitants and the capital of the province of Cordoba, situated in the center of Andalucia in Spain. A great cultural reference point in Europe, this ancient city has been declared a World Heritage Site and contains a mixture of the diverse cultures that have settled it throughout history.

The biggest attraction in Cordoba and a truly must-see building, the Mezquita is a massive former mosque-turned-cathedral famed for its “forest” of columns topped with Islamic-style red and white striped arches among its other many architectural highlights and serves as a reminder of the glory and importance Cordoba held in medieval times. The building is full of history and beauty – you will need at least one hour to have a good look inside and to understand all the architectural mixes that you will find in there. 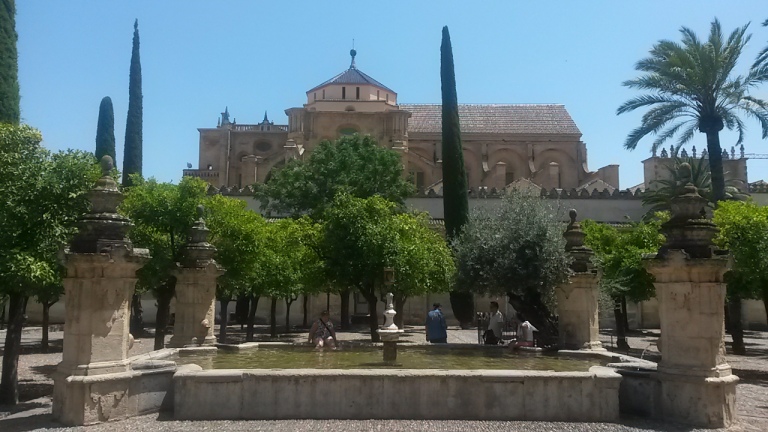 Built in 786 as a mosque, the structure was expanded several times under Cordoba’s Muslim rule while still remaining largely true to the original design. Following the Christian Reconquista of Cordoba in 1236, work immediately went underway to convert the building to a church, and four centuries later a cathedral at the center of the building was constructed, though not without controversy as it significantly altered the space. Today, despite the presence of the cathedral, most of the original mosque structure remains remarkably well-preserved.

A tangle of narrow medieval streets surrounding the Mezquita, the Old City sits just uphill from the muddy Guadalquivir River and contains the vast majority of Cordoba’s tourist attractions.

The Old City is mainly a pedestrians area, where cars are not allowed to get in and it consists of small streets where you could easily get lost. Everywhere you see beautiful colors, bloomed flowers, it’s as if this town wants to remind you once again that Spain is such a vivid and full of life country. 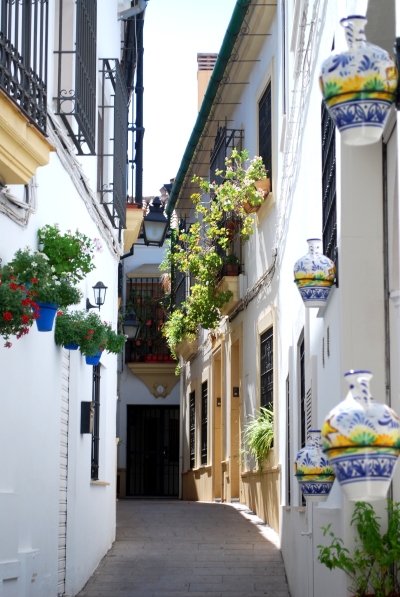 The Old City has quite a lot of Arabic influences in its architecture and, having visited Morocco last year, I can say that it looks quite a lot like the Fes Medina, following almost the same model. 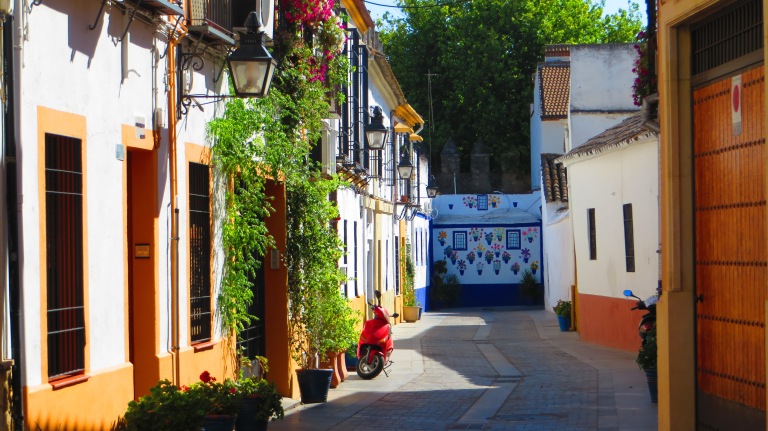 As I said, we went there in June, and it was incredibly hot, in the afternoon we could barely even breath, but you know, there’s always a small bar with a nice terrace under the shade where you can have a nice and cold beer. Or, if you want to experience a true Arabic experience in an European Medina, you can also go for the traditional hot mint tea, which will make you feel cool instantly.

There are a lot of Tea Houses in Cordoba (knows as Teterias), where they serve delicious mint tea, as the one we had in Morrocco, together with all sorts of sweet pastries. We chose Teteria Al Khayama this time.

As for the food, well, again heads down for Spain and their cuisine. Cordoba is very well known for its delicious tapas and if you know the right places to eat out, then you can say you tried it all. As we had a friend who is originally from Cordoba with us, we were assured that everywhere we had something to eat was the best choice.

We started with Casa Rubio which is a very nice place just as you enter the Old City. Here we tried Salmorejo, which a sort of tomato cold soup, served with boiled eggs and ham and is absolutely delicious. It’s also very refreshing for a hot summer day.

We also tried here mazamorra, which is a delicious and traditional Cordoba dish, made with bread, almonds, garlic, olive oil and vinegar. 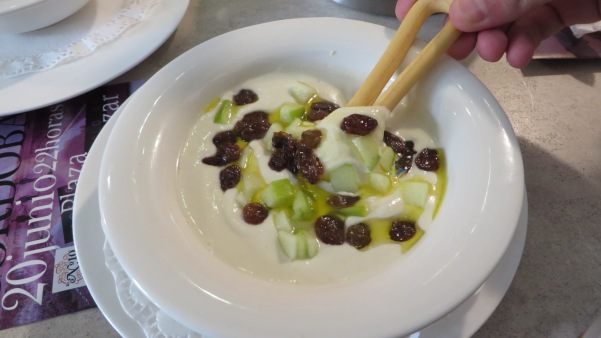 And also flamequin, some sort of pork rolls, very, very tasty. The flamenquín is a typical dish of the cuisine of Cordoba. It was created during the 1950s in a restaurant in the city of Andújar (Jaén). It owes its name, which translates literally to “little Fleming”, to the fact that its golden color, deriving from the egg used in the batter, resembled the blond hair of the Flemings who came to Spain accompanying the Emperor Charles V. 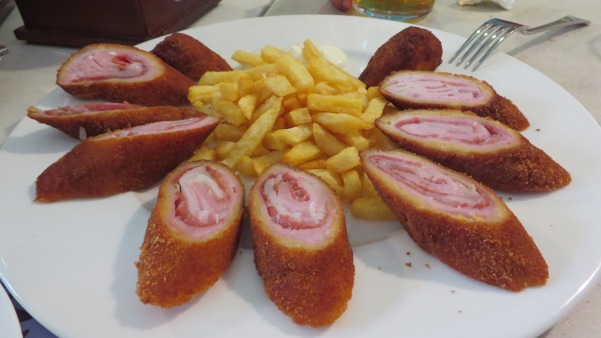 The flamenquín , more known as roll saint jacob ,consists of slices of jamón serrano wrapped in pieces of pork loin, coated with egg and breadcrumbs and then deep-fried. It is often garnished with French fries and mayonnaise. A common variation replaces the loin with boiled ham. It can also be made with other fillings, such as fish, cheese, or poultry. 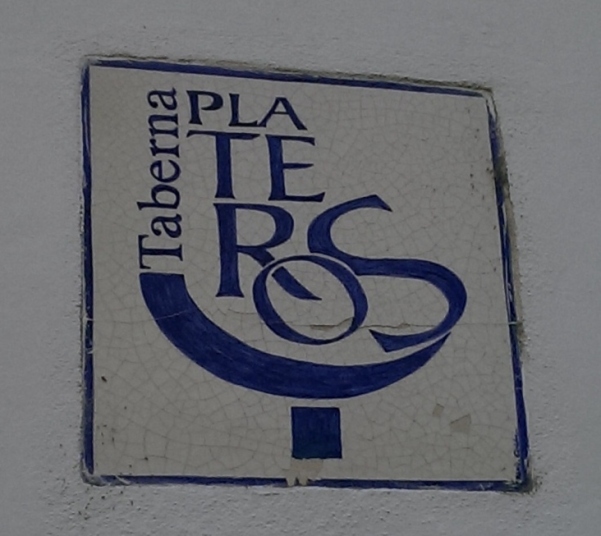 For dinner we went to Taberna Plateros, a traditional Cordobese restaurant, known mostly by the locals, where you will have the best food in town for such a low price. I can’t remember exactly what we had there, because our friend took the job to actually order everything for us, but it was extremely delicious. All sorts of tapas, perfectly combined together, with fresh ingredients that would just make us droll and ask for more. It’s a good idea to ask the waiters what they recommend for the day, you will not be disappointed for sure. Unfortunately or not, the food was so delicious and we were so hungry, that none of us had the inspiration to take some picture and the only picture that we have is with this fish roll and tomato slice with basil.

For the evening and some more beers, we headed to Plaza de la Correderra, which is the only ‘Plaza Mayor cerrada’ (closed main square) in Andalucía.

Here is also were we had our accommodation, we stayed in the Hostel La Correderra. It’s right in the city center and you can easily reach all the attractions.

Cordoba was one of the places that I enjoyed the most during this summer trip. Not a very big city, which means that you can reach all the tourist attractions on foot and also not very crowded, which allowed us to actually enjoy the surroundings. Well, probably it wasn’t very crowded also because, like I said before, it was incredibly hot outside. Also, I really liked the way the Arabic style made its way into this beautiful town and how it reminded me of the Fes Medina. 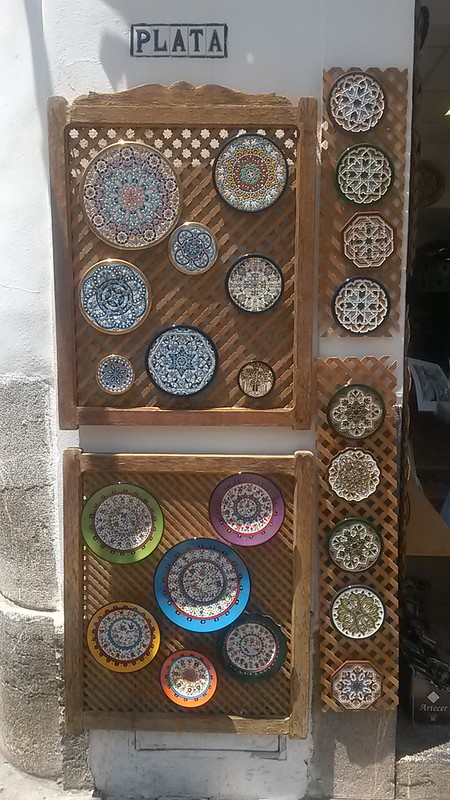 It’s a must go if you find yourself in the Southern part of Spain, because the architecture, the culture and, of course, the cuisine make it all worth it.