[South Africa] Johannesburg and its surroundings

Johannesburg was our first encounter with South Africa and I have to admit that this city made the earth tremble a bit under my feet, a situation and a reality that rarely happened to me before, at least not at this scale.

After reading Nelson Mandela’s ‘Long Walk to Freedom’, (after coming back from the South Africa trip), I understood even better the realities of this country and how long it still needs to actually be the democracy that Mandela had fought for and was dreaming about.

The realities of the people in South Africa are harsh. Most of the population is still living in very poor conditions, some of them suffering of starvation. Although Apartheid is long gone, its bruises are still so visible everywhere you look. Racism still exists in many parts of the country, people are still learning to live with each other, regardless of their race. But this is a long struggle, needing a lot of time and effort.

South Africa is still building its identity as one nation, no matter the race.

Rich people in Johannesburg live in nice neighborhoods with electric fences surrounding their houses, with surveillance systems and guards 24/7. The so called ‘Gated-society’ is something that shocked me right from the first day in Johannesburg. This is a result of the poverty, in the end. People who don’t have any means of satisfying their basic needs end up doing things that make the people who have a “normal” life or have “too” much take extra measures to protect themselves. You hear stories of murders, thefts, kidnappings all the time.

Poor people live in tin-houses, in slums where they sometimes don’t even have electricity or running water. All together, over-crowded, with limited access to education, health-system or other such benefits.

Someone was telling us that the government is doing more and more social programs to allow these people to go to school, to have a house and to try to overcome their situation, to get out of the poverty. But we are talking about tens of millions of people who need help like this.

Regarding Johannesburg, I wouldn’t consider it a very touristic city. The city has mainly newer buildings, there are lots of companies coming in the city to open offices, in some parts it looks like a very modern city. It’s best to have a car and wonder around the city. The distances are quite big and there isn’t too much public transportation (actually not at all, except for the mini-buses that take the people from the poor neighborhoods to work and back home).

We stayed in the area of Johannesburg for about 3 days and we did get a chance to see a few of the hot spots while there. We tried to enjoy our vacation, although we did talk quite a lot about the situation in South Africa, trying to understand it and trying to see which is the way out.

Here’s the places we visited while in Jo’burg (like the locals call it).

The Cradle of Human Kind

The Cradle of Humankind is a paleoanthropological site about 50 kilometers northwest of Johannesburg. Declared a World Heritage Site by UNESCO in 1999, the site currently occupies 47,000 hectares and it contains a complex of limestone caves.

The Sterkfontein Cave, which we also visited, contains the discovery of a 2.3-million-year-old fossil Australopithecus africanus (nicknamed “Mrs. Ples”). All the findings in the area have led to the ‘Out of Africa’ theory, estimating that most human ancestors originated from one general spot… Africa.

Although smaller than us, Australopithecus Africanus is regarded as one of our early ancestors because it walked upright. In 1997 a complete hominid skeleton called ‘Little Foot’, also found in the Sterkfontein Caves, was introduced to the world and is still in the process of being described.

Being in Johannesburg, the Apartheid Museum is a must. It gives such a good picture on the recent history of South Africa. It’s very well documented, it gives all the information and details about how and why the Apartheid was installed in South Africa, who was responsible for it, how people were treated depending on their color and how in the end it was abolished and a new democracy was installed.

As you enter there is one phrase that really makes you wonder why sometimes human nature goes so wrong with its decisions :

“Humanity was born in Africa. All people, ultimately, are Africans. “

Provocative film footage, photographs, text panels and artifacts illustrate the events and human stories that are part of the epic saga, known as apartheid.

A series of 22 individual exhibition areas takes the visitor through a dramatic emotional journey that tells a story of a state-sanctioned system based on racial discrimination and the struggle of the majority to overthrow this tyranny. A complete tour will last around 3 hours, so plan as to have enough time to go through all the areas and try to understand what had happened.

Soweto is a city developed as a township for black people under the apartheid system. Most of the struggle against apartheid was fought in and from Soweto. The name Soweto is an acronym, made up – in apartheid days – from the first letters of the words “south western township”.

Soweto is inhabited by over two million people, with homes ranging from extravagant mansions to makeshift shacks. Soweto is a city of enterprise and cultural interaction. It is a popular tourist destination with sites such as Kliptown (where the Freedom Charter was drawn up), the home of former President Nelson Mandela, the Hector Petersen Memorial site.

We went to Soweto just before leaving back home to Romania, and it was such a nice experience. Colorful neighborhood, with friendly people, smiling faces and relaxed.

Museum Africa is located in the Newtown Cultural District and from the description we found on the internet, it seemed very appealing. In reality, it’s just a small collection of ethnological artifacts, a few photographs and paintings, but it’s worth paying a visit while in the area.

This place was something us, the girls, very much enjoyed and we did spend a lot of time deciding what to take with us from there. Beautiful hand made products from South Africa, ornaments, bead work, clothes, handbags, decor items, paintings, animal skins and gifting products.

Everywhere you looked there was so much color and beauty, that it almost made us not want to leave the place anymore.

Carnivore is a restaurant, but a must try when in Johanneburg if you’re interested in tasting some of the types of meet that the locals eat. We had giraffe, crocodile, all sorts of antelopes, it’s a very interesting experience, at least once in a lifetime.

The menu is standard, meaning there is a list of the steaks you would be getting, you pay a standard price and eat as much as you can during the evening.

Talking about food, South Africa has quite a big influence on its cuisine. There are some traditional dishes like pap (which is a sort of polenta), but, as someone was saying to us: ‘Africans love their meat’. You will get plenty of meat anywhere you go, barbecue is some sort of national sport. They do have delicious beef and lamb steaks, but they do eat also chicken and pork. Hamburgers are also present on most of the restaurant menus.

This is how our visit in Johannesburg happened, with beautiful things and experiences, but also with difficult stories, sometimes even hard to believe, about what is happening in South Africa. What did actually give me hope during this trip, was the fact that I saw so many smiles on people’s faces, from rich to poor, they still remembered to smile and have an optimistic look on their faces. 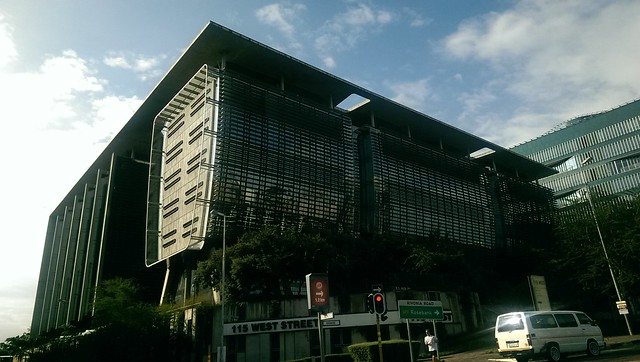