Mountains are cool, that’s a fact! I’m even more convinced now, after we followed some of the hiking paths of the Bucegi Mountains. It was hard, but even more it was beautiful, amazing, breath-taking. We had a great weather, we chose a time of the year when everything was green and flowers were blooming.

We started our trip early in the morning on a hot Saturday from the Pestera Hotel in Padina, a small mountain resort in the Bucegi mountains on the Ialomita Gorges, at about 1500m high. We followed the vertical blue line hiking path to our destination, the Omu Chalet and the Omu Peak, at 2504m high.

We haven’t done too much hiking so far and this was one of the hardest hiking paths we have chosen until now, so it was a test for us to see if we enjoy it and if we manage to get to our destination. It was a bit harder than we tought, as we were also carrying back-packs and it did take us 30 minutes more that it was written on the panel down at the Padina Chalet, but every step we took and every minute we spent on the path was worth it.

So, as I already said, we started from the Pestera Hotel and passed near the Obarsia, Babele and Doamnele mountains. After about one hour and a half we reached the Obarsia Waterfalls. We were half way, but this is where we would actually start climbing to get to the Omu Peak.

After almost another hour, we passed by the Turkish mosque (Mecetul turcesc). In front of us we could see the Gavanele (2472m) and the Bucura (2503m) peaks, which were a sign that we were getting close to our destination.

By this point we started being actually quite tired. We had to have stops often, especially since the weather wasn’t so warm as it was down at the Pestera Hotel and the wind was blowing strongly from our front. We finally got to Saua Vaii Cerbului, where there was the last sign in the direction of the Omu peak saying we still have 45 minutes until we get there. It took us only about 20 minutes and we finally made it. Look at me up on the peak, enjoying this success 🙂

There were somewhere about 5 degrees at the Omu peak, which, for a summer day in Romania, is practically unimaginable. But yes, it was very cold. When we started the trip down at the Pestera Hotel we were thinking how nice it will be to get to Omu and have a beer, but we ended up having a hot soup and a good cup of tea with rum. There is a caban on the Omu peak, where you can also sleep and eat. It’s only open from May to October, because for the rest of the year, as it snows a lot, it can’t be reachable.

We took a good rest and continued our trip to the Caraiman mountains and the Caraiman cross. We stopped somewhere on our way and had a quick snack on the edge of a mountain, enjoying the crazy view at our feet

, which took us close to Babele and from there we took left on the red cross sign path. It’s a very easy hiking path, we reached our destination in about two hours of light walking. The Caraiman mountains offer a lovely view over Busteni, one of the most famous winter resorts in Romania.

After Caraiman we went to the Babele Chalet. Again an easy path, of about an hour of light walking. We had dinner at the chalet since it was already 5:00 PM when we got there, we took some pictures of the Babele and the Sfinx and left back to Padina, where we had left our car.

The Babele and the Sfinx are natural rock formations, the first ones look like some old ladies and the second one looks like a sphinx.

From here we took the blue cross path and went back down to the Pestera Hotel. We were there in about an hour, extremely tired, a bit angry, but when we got back to the camping and thought about everything that we had done for the day, I felt happy with myself. It was a full day, with lots of effort, with times when I wanted to just stop, or go back, but besides that, it was a day to clear my mind, to breathe the freshest air in Romania, to enjoy all the beauty around me. Mountains do rock! Big time! 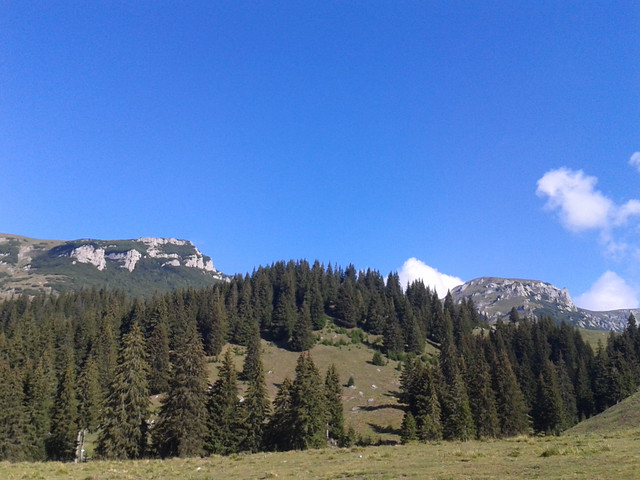 And here is the map of our trip, marked with a yellow line.