Although it happened quite a while ago, the cold outside makes me want to think some more about the warm and beautiful summer days. So what better way to do that than just remember one amazing weekend in August.

The Făgăraş hiking trip was the ultimate for the summer of 2013, for sure. The longest, the hardest, but still the most relaxing and beautiful trip so far. I’ve been trying to tell you this story for some time, but just didn’t know how and where to start from. But here it goes, take your time, it’s going to be long.

We left on Friday afternoon, with hiking gear and backpacks filled with food and clothes for the next three days. As I remember it now, and look outside the window at the beautiful mountains, it’s like I’m still there. So here we are, on Friday afternoon, after managing to finish work on time and running from the office. We went to Sebesu de Sus (about 30 km from Sibiu) by car until we got to the hiking path. We followed the trail marked with a red point

for about 3 hours until we go to the Suru Caban.

Getting to the Suru Caban was quite exhausting, we had a lot to climb through the woods, we were incredibly tired when we got there. We only prepared dinner, had some beers and fell asleep in no time.

The original Suru Caban got burned some years ago, but last year someone offered to build another one. The new one looks very good, it has 25 beds in two rooms, it’s warm and the people who take care of it are very friendly. It costs 30 lei/ night to sleep there and you can also ask the guys there for drinks or dinner.

On Saturday we woke up early because we had a long way ahead of us. We planned to get to the Negoiu Caban by the end of the day. According to the map, the trip should have taken us about 8 hours, but since not all of us were in the best condition, it took us about 10 hours to finally get to the caban. It was a crazy day. We had to climb peaks and then go down, up and down, up and down for about 6 times. It was tiring, exhausting, but it was an incredible trip with so many natural beauties all around us.

From there we followed the red line trail

to Curmatura Rosiilor, Budislavu peak (2343m), Portile Avrigului and then to the Avrig Lake where we stopped to take our breath, have a well-deserved lunch and enjoy the beauty of the lake. After a break of about one hour we continued our trip on the same trail to Grabova peak (2188m), Scara peak (2306m) and then to Saua Scarii. This part of the trail was a bit more difficult than in the beginning. The path was narrower, we had to be very careful were we put our feet.

Getting to Saua Scarii, we were already quite tired and we only wanted to get to the cabana faster. The map said we had only two more hours and there we were. From here, after a break and a snack, we followed the blue cross trail

and went down to the Serbota river and from there climbed to the Negoiu caban for another 20 minutes. We got to the caban around 8 in the evening, got our room, had dinner and almost instantly went to bed.

The Negoiu Cabin is bigger than Suru, it has a restaurant with very good and cheap food and friendly staff. They also have bathrooms with showers, but if it’s very crowded you might not get the chance to have a shower. For Negoiu we paid 20 lei/night for a place in a 8-bed room.

On Sunday we initially planned to climb up to the Negoiu peak (2535m) which is actually the second highest peak in Romania, but when we woke up it was almost impossible to move our legs, so we gave up on that and decided to just head home.

From the Negoiu Caban we followed the blue triangle trail

to Porumbacu de Sus (for about 2 and a half hours), where a friend picked us up with his car and got us home.

We were tired, we could barely move, but my mind was so relaxed and I was feeling so light after this trip that the effort we had been through didn’t matter anymore. 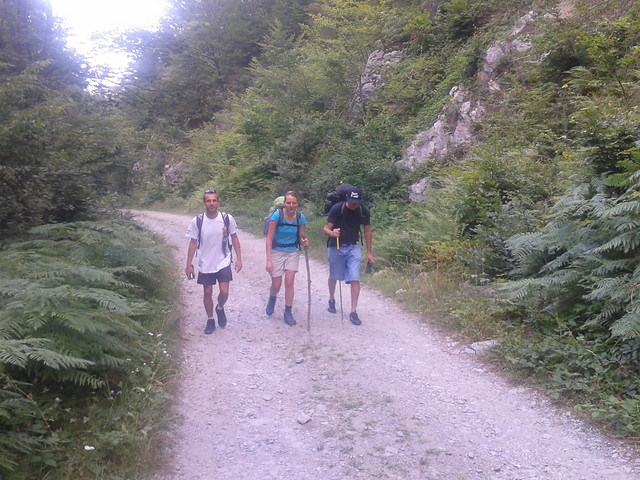 The Fagaras mountains are truly spectacular and the view is just breath-taking so an experience like this gives you, in the end, the positive energy you need for a busy day to day life.