What seemed in the first place to be just another city break for us, turned out to be something more than that. We left home planning to stay in Dublin for 5 days and explore the city as much as we could. But meeting some friends who live in Ireland made us change our plans and decide to go outside of Dublin and explore the country a bit more. So for one day we took a nice road trip to Northern Ireland to check out the Giants Causeway and the Carrick-a-Rede Rope Bridge.

The Giant’s Causeway is an area of about 40,000 interlocking basalt columns, the result of an ancient volcanic eruption. It is also known as Clochán an Aifir or Clochán na bhFomhórach in Irish and tha Giant’s Causey in Ulster-Scots.

The area is absolutely superb. Besides the rocks that have such perfect shape, you have the sea, the mountains, everything mixed together for a perfect experience.

It is located in County Antrim on the northeast coast of Northern Ireland, about three miles (4.8 km) northeast of the town of Bushmills. It was declared a World Heritage Site by UNESCO in 1986, and a national nature reserve in 1987 by the Department of the Environment for Northern Ireland.

The tops of the columns form stepping stones that lead from the cliff foot and disappear under the sea. Most of the columns are hexagonal, although there are also some with four, five, seven or eight sides. The tallest are about 12 metres (39 ft) high, and the solidified lava in the cliffs is 28 metres (92 ft) thick in places.

The shapes of the columns are just amazing and, honestly, it’s really hard to believe that this is just the nature’s hand. They look so perfect, that you would think that it’s made by humans.

There is also a legend that tries to give an explanation to the shape of the rocks. According to legend, the columns are the remains of a causeway built by a giant. The story goes that the Irish giant Fionn mac Cumhaill (Finn MacCool), from the Fenian Cycle of Gaelic mythology, was challenged to a fight by the Scottish giant Benandonner. Fionn accepted the challenge and built the causeway across the North Channel so that the two giants could meet. In one version of the story, Fionn defeats Benandonner. In another, Fionn hides from Benandonner when he realizes that his foe is much bigger than he. Fionn’s wife, Oonagh, disguises Fionn as a baby and tucks him in a cradle. When Benandonner sees the size of the ‘baby’, he reckons that its father, Fionn, must be a giant among giants. He flees back to Scotland in fright, destroying the causeway behind him so that Fionn could not follow. Across the sea, there are identical basalt columns (a part of the same ancient lava flow) at Fingal’s Cave on the Scottish isle of Staffa, and it is possible that the story was influenced by this.

The Giants Causeway is a perfect destination for a nice Sunday walk. It can be crowded during weekends, but it’s plenty of room for everybody. If you’re into hiking, there are some mountains so you can hike on the top, for a even more spectacular view.

There is no entrance fee, but you can chose to get a guide and also, you can get a bus from the parking place to the columns (it’s actually just about 500m walk).

Much of the Giant’s Causeway and Causeway Coast World Heritage Site is today owned and managed by the National Trust and it is one of the most popular tourist attractions in Northern Ireland. 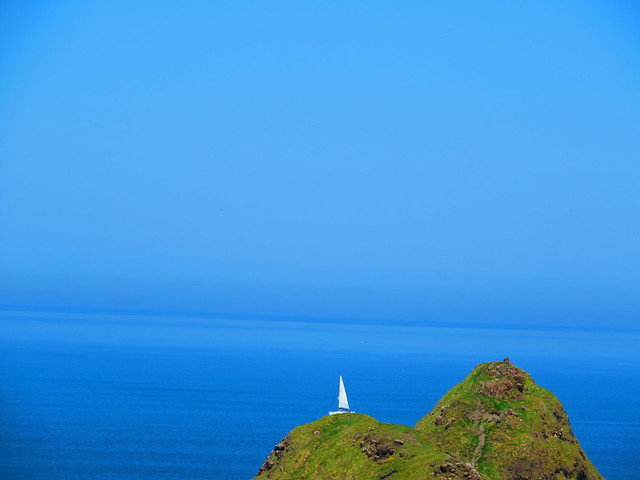