On a Sunday afternoon, coming back from a lovely weekend to Garana and the Danube, we made a quick stop to Ulpia Traiana Sarmizegetusa, located in the Hunedoara county, in the Samizegetusa village. We first thought that there’s nothing too much to see, but actually the site is very well-preserved and offers clear information about what how life was about 2000 years ago.

The city was founded in the years 108 – 110, on the ground of a camp of the Fifth Macedonian Legion, by veterans of the Dacian wars. From the very beginning it received the title of colonia and the status of ius Italicum. The city had around 20 000 – 25 000 inhabitants on an area of about 33 hectares between the walls and another 60-80 hectares outside of the walls.

The amphitheater is an ancient stadium of our days. It is elliptical in shape and had a capacity of approximate 5000-6000 spectators, who occupied their seats in very strict social order. The amphitheater of Sarmizegetusa provides us with important data about the period after the Aurelian retreat, having been turned into a fortress.

Situated in the immediate vicinity of the east gate of the amphitheater it is the Temple of Goddess Nemesis, the protector of fortune, most worshiped by the gladiators.

On the way to the big Forum Vetus, we find the Domus Procuratoris Horreum, the palace of the financial procurator of the Roman province Dacia Apulensis.

And a glass workshop.

The Forum was the center of the city, were the two main roads intersected: Cardo Maximus and Decumanus Maximus. On the three sides (east, north and west) the yard of the forum was surrounded by porticus, marble columns. The entrance was made through a monumental gate, a tetrapilum. The yard of the forum was decorated with statues and commemorative monuments dedicated to some Roman emperors.

The Basilica was the building which dominated the entire architectural ensemble.It was the place in which the royal council was held, and the monarch exercised his legal attributions.

Close to the basilica was the Tribunal and the Curia, a hall where the counselors of the city, the decurions, discussed the important matters of the city, presided by the two mayors, the duumvirate, Beneath the CUria were the two vault rooms, aeraria, the treasury rooms of the city.

Ulpia Traiana Samizegetusa can be visited daily from 9 AM to 5 PM and the ticket costs 6 lei (around 1.5 EUR). 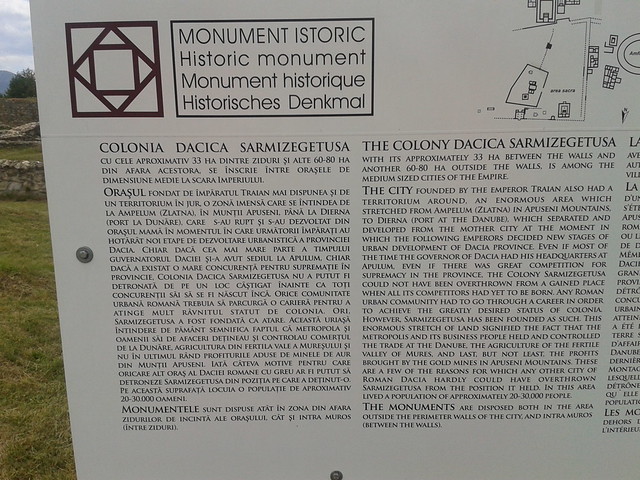