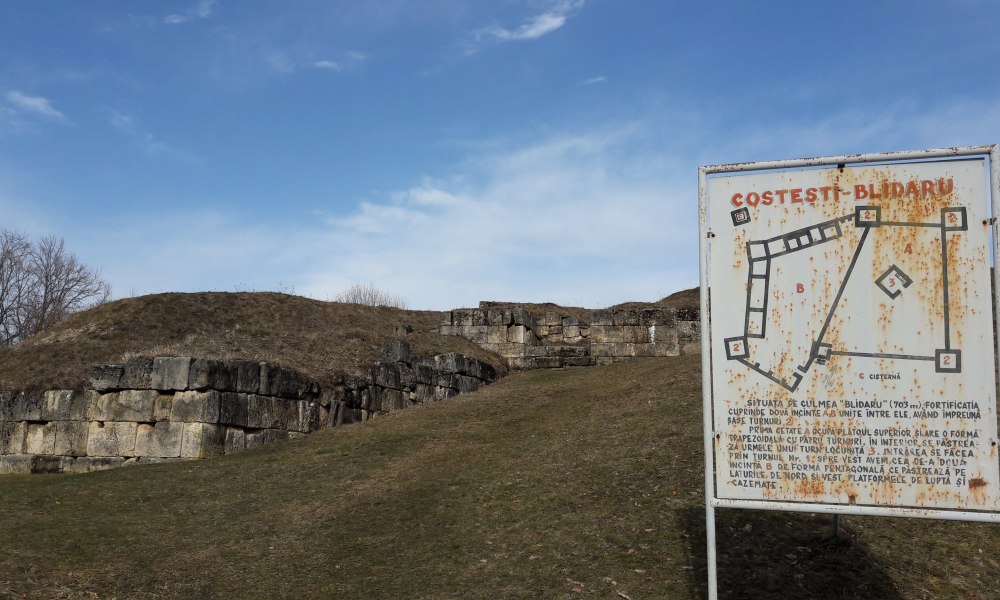 [Romania] Family weekend in search of the Ancient Dacian Fortresses

Although it’s only the beginning of February and spring is not even thinking of showing its face, we still can’t stand still at all during the weekends. So here we are again, quickly shutting down our laptops on Friday afternoon and back on the highway – this time in search of the Dacian Fortresses in the Hunedoara County. 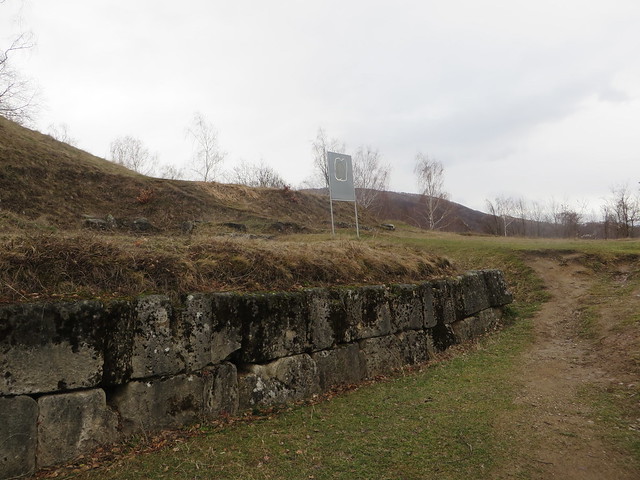 The Hunedoara county has a very rich history, from ancient, to medieval, to the XIX century and fortresses, castles and churches still standing proof. The area has been inhabited for thousands of years, there are also traces of a species of dinosaurs that has lived around some million years ago.

This time we focused more on the UNESCO World Heritage Dacian Fortresses, ruins more than 2000 years old, proof of the fact that the area had been inhabited by the Dacians, in their country called Dacia (they are a part of the ancestors of Romanians). 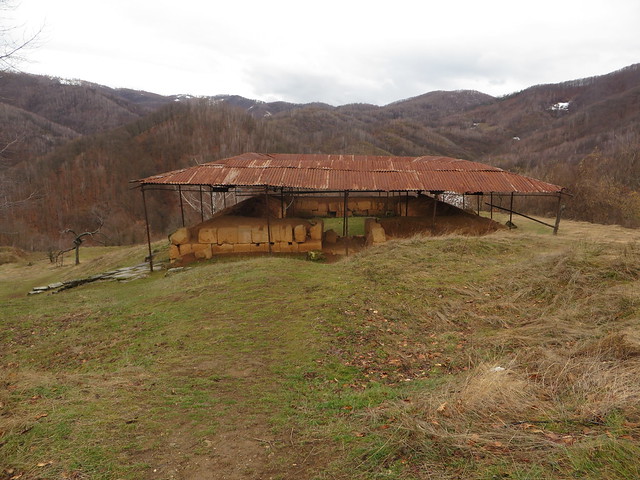 The most important Dacian Fortress is Samizegetusa Regia and the one you can reach by car on a newly renovated road. Unfortunately the site was closed when we got there (for some controversial tree cutting), so we couldn’t visit it, but we had seen the place a couple of times, in the past.

The Dacian Fortress of Costești

The Dacian Fortress from Costești was built in the 1st Century BC, under the rule of King Burebista with a defense purpose from the Romans, who were constantly attacking the area, being so rich in natural resources. 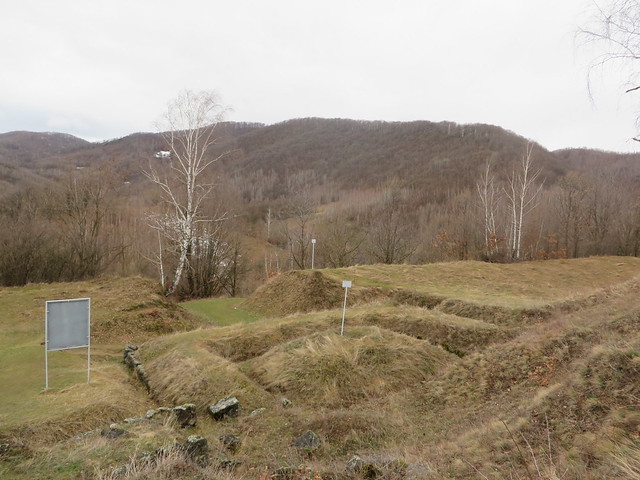 To get to the Fortress, you have to get to the village Costești and from there follow the signs. For the last 3 kilometers there’s a forest road, but still it’s in a quite good condition and accessible with any type of car. The last 200 meters will have to be covered on foot. 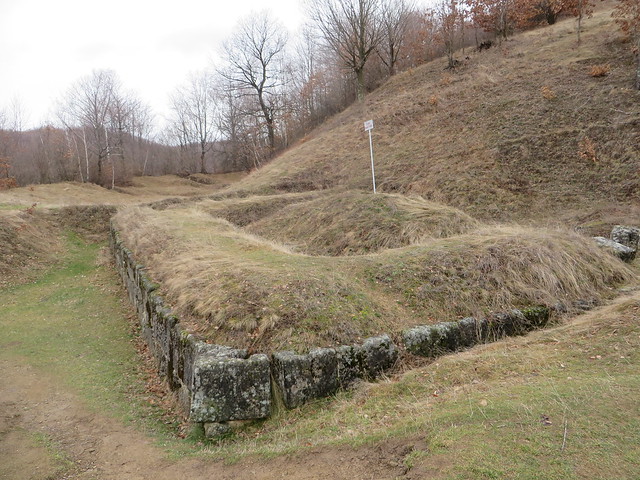 The Dacian fortress of Costești is situated on Dealul Cetăţuia (“Stronghold Hill”), at 561 m altitude, on the left bank of the Apa Grădiştii River, at the point where the valley is narrowing. Even if it is not the highest point in the area, the hill dominates the landscape offering a good visibility over the Mureș Valley to the north. 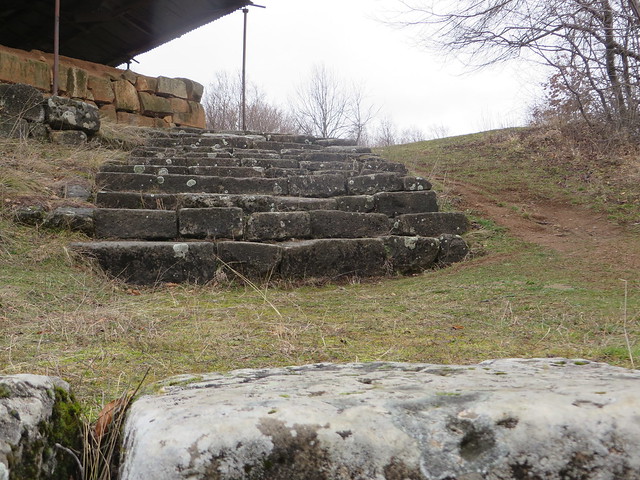 The fortress had a complex system of fortifications and different facilities. The fortress occupies the upper part of the hill; the hill top was leveled by the Dacians. On the slopes several terraces were built, some of them being outside the fortified area. The civil settlement probably occupied the lower terraces as well as the lowland near the valley, under the present center of the village. 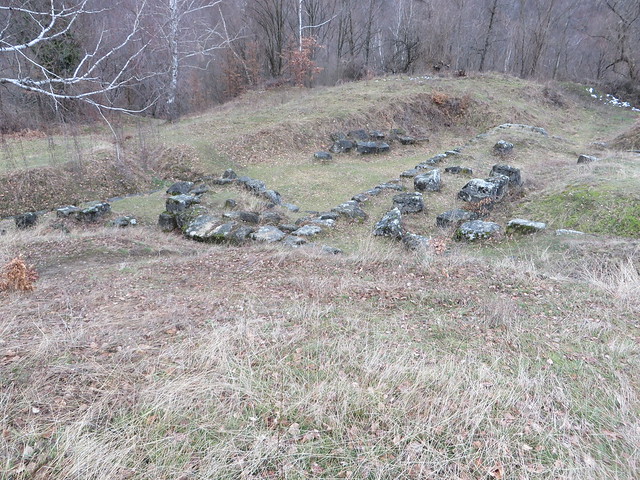 The Fortress is an UNESCO World Heritage Site, but don’t expect to find anything more than just a few walls and stones. The site has not been maintained lately, you won’t find any info cards or anything alike. Still, you will find a beautiful surrounding, with a great view you can enjoy.

The Dacian Fortress of Blidaru

If for Costești you only had to walk 200meters, for Blidaru you have to do an hour hike, as there’s no car road available, but only a hiking path. A very nice one actually, not very difficult, that goes through the forest. For us it was more than one hour as we had the kid with us and she wasn’t very willing of moving forward. Lucky us, we got company from two dogs that got her interest and we finally managed to get to the fortress. 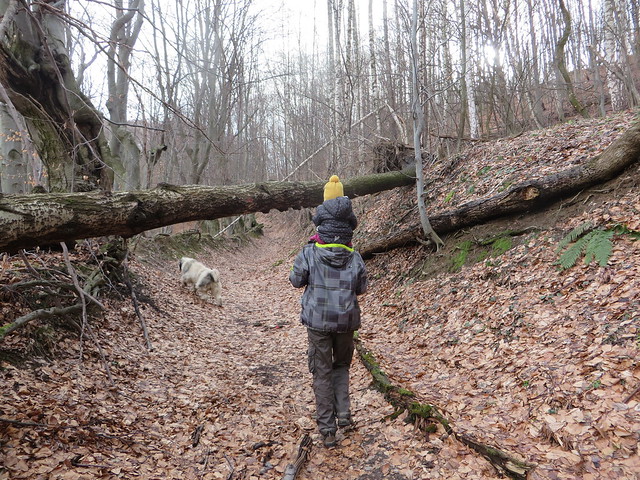 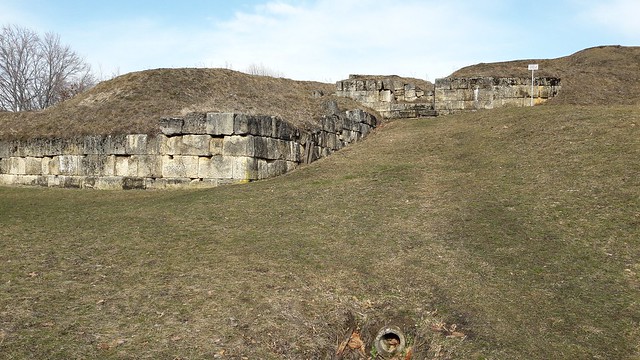 For the construction of the fortress, the Dacians excavated and enlarged the upper part of the hill, thus obtaining a relatively plain surface of near 6000 m2 on which they built the stone ramparts and other structures. 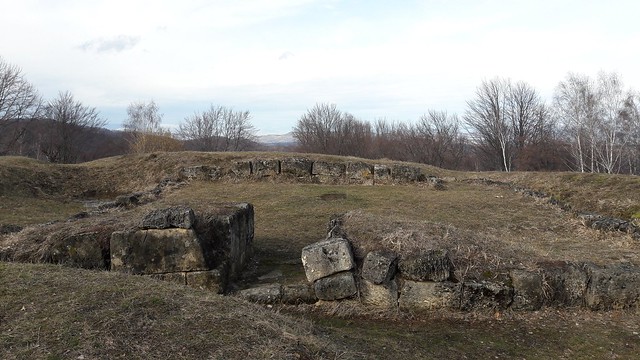 The ruins of the fortress are still visible today. On the slopes of the hill on which the fortress lies, terraces were arranged where towers were constructed having the ground level made of limestone blocks, in a technique similar to the one used for the construction of the fortress walls. The towers have probably functioned also as aristocratic residences, as well as important surveillance points for the access to the fortress. 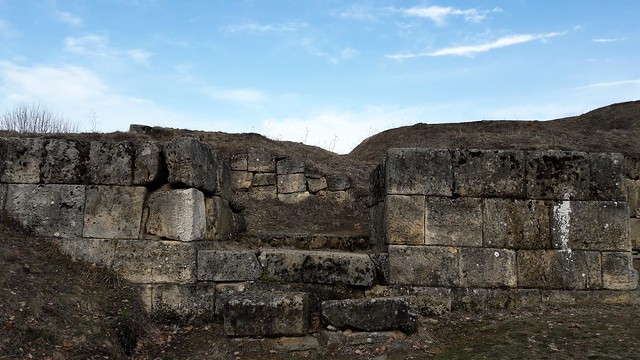 There are 3 more ruins of Dacian Fortresses in the Hunedoara County, all of them being accessible only by hiking – we will have to come back some other time to check them out.

Saturday was dedicated entirely to the two Dacian Fortresses and a bit of relaxation time as traveling with the kid also means to adapt to her needs as well. On Sunday we were supposed to head back home, but we couldn’t help to make a few other pit stops on the way, as we had some other places to check out.

First stop was Hațeg and the Dinosaurs Geopark from the Hațeg Land. This is an unique place in Romania, not too much promoted yet, but with a huge potential. The Geopark and its main visiting points that spread all over the Hunedoara County are closed during winter time, but we did get accidentally across one of the employees of the institution and he told us the story of the Geopark.

The Dinosarus Geopark from the Hațeg Land was created around the Balaurul Bondoc, a unique species of small dinosaurs discovered in the area around Hațeg . But the Geopark means more than just presenting some fossils. The Geopark tries to promote the area around Hațeg as a whole – with dinosaurs, with history and historical monuments (castles, churches, fortresses), with rural life and its culture and traditions, with natural reserves.

The Geopark was only established a few years ago and they are still working on creating a strategy that would attract more people to visit the area. The story we heard got our attention and for sure we will be back in summer, when all the visiting points are open, to explore more the area.

Just before heading back home, we had a quick stop at The Stone Church from Densuș. This church is one of the oldest Romanian churches still standing. 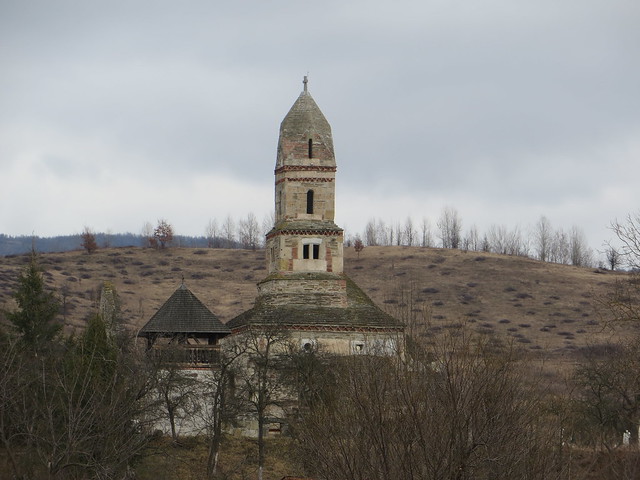 It was built in the 7th century with additions made in the 13th century, on the site of a 2nd-century Roman temple, with some materials from the Dacian Sarmizegetusa fortress. It has a stone tower above the nave. Inside the church there are 15th century mural paintings that show Jesus wearing Romanian traditional clothes. 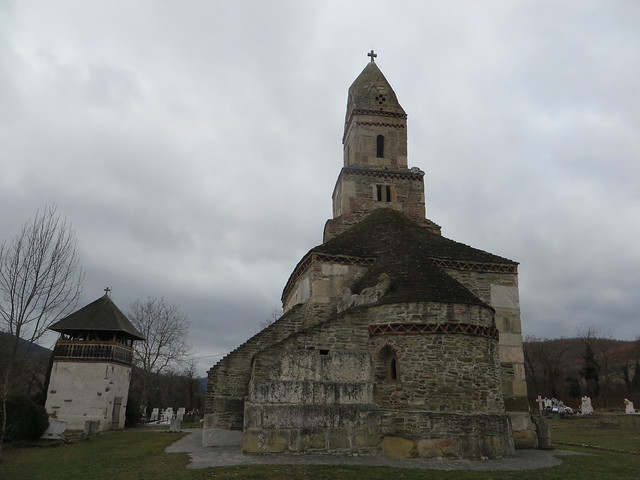 It is considered that on the setting of the present day church, there was once a Dacian temple dedicated to Zamolxis, upon which the conquering Romans built a temple dedicated to the god Mars. After the Roman administrative withdrawal, the temple became a Christian church, and sermons were held there. Its present form dates from the beginning of the 13th century. Considering its tradition, it dates from the 4th century AD, and is considered the oldest church in Romania and South East Europe.

For the weekend we chose a guesthouse close to the Dacian Fortresses, in the Orăștioara de Sus village. The guesthouse was build on an old water mill, still functional even today. Just the day before our arrival they grind some flour for some of the village neighbors. 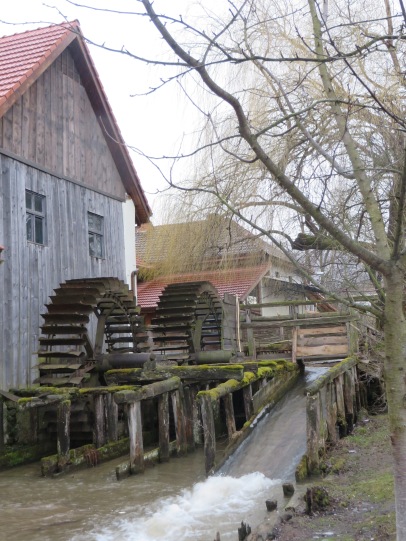 At Moara lu’ Antone Guesthouse we found exactly what we are always looking for when we search for accommodation. Warm and cozy rooms, friendly hosts who took the time to talk to us and tell us stories of the village and the area, delicious food cooked with home grown ingredients and enough space outside to run around with kids. Not to mention the beautiful mill and the river passing through the yard, plus the friendly dogs that kept our daughter busy.

What else to do and see in the area:

[Romania] The Rotonda Chapel and The Reformat Church – Geoagiu

Photo Gallery of the trip

The Dacian Fortress from Costești 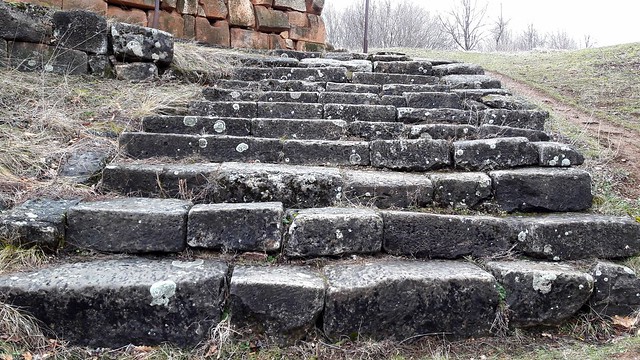 The Dacian Fortress from Blidaru 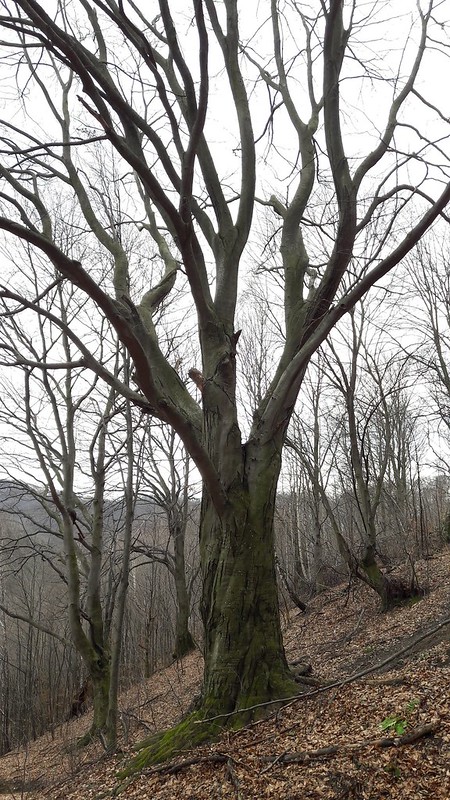 The Stone Church from Densuș