As I moved to Sibiu in September 2013, I was planning to write more about the places I like in this lovely city from the heart of  Romania. It did take me some time to get me moving, but here it it, my first article from the Sibiu Series  – The Small Square (Piata Mica). 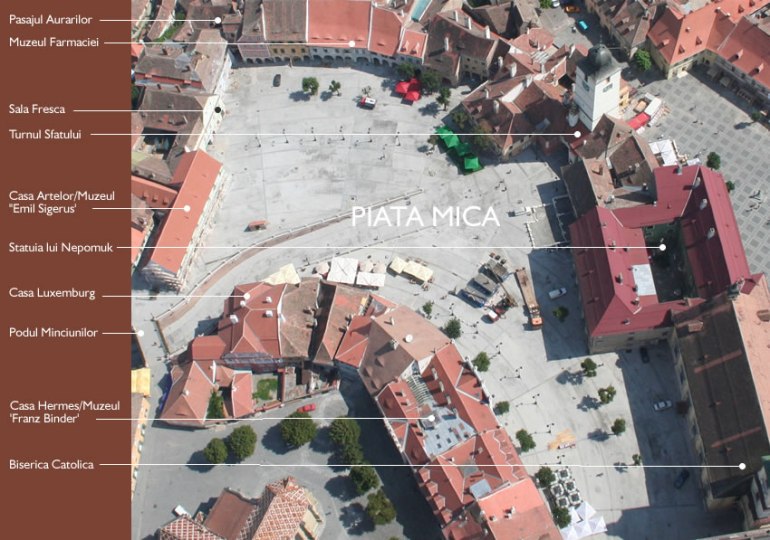 The Small Square is actually one of my favorite places in Sibiu, as most of the time we go out we chose to come here. There are plenty of nice cafes and bars, which have terraces during summer time and the square offers a nice view when enjoying a nice and cold beer. There are also some very nice restaurants, with great dishes, but I will talk about all these later on. Now let’s have a look at what you can actually see, except bars and restaurants, in Sibiu’s Small Square.

Let’s start with The Liars’ Bridge that actually splits the Small Square in two. The bridge was built in 1859 and it used to connect the upper and the lower part of the town. The name sounds very appealing, but actually it was a misspelling of the German word Liegenbrücke (which means lying bridge). Liegenbrücke is very similar to the word Lügenbrücke (which actually means Liars’ Bridge) and this is how it was translated into Romanian and used forever as the official name.

The Liars’ Bridge is one of the main attractions of the Small Square, where you can have a very nice view over the lower town and the Small Square. Everyone who visits Sibiu has to have a photo here.

Left to the Liars Bridge, going south you will find the Luxembourg House (Casa Luxemburg), which got this name in 2004 after a visit of the Duke of Luxemburg. It was built at the beginning of the 15th Century and seats on the first fortifications of Sibiu (“Villa Hermani”).  Two older Saxon houses, one facing the Small Square and the other the Huet Square were combined to form a larger building.  A third floor was added in early 1800s. 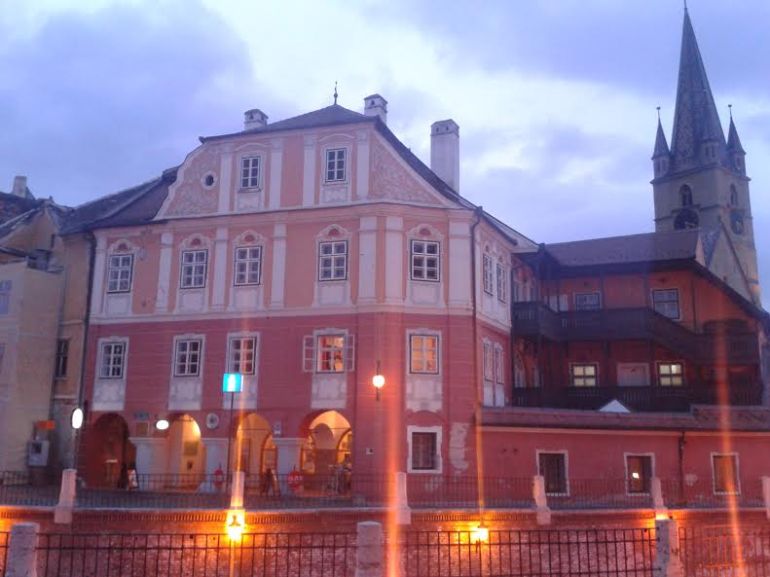 The Luxemburg House features an interesting mix of well-balanced Classical, Baroque and Rococo architecture.  Original elements that have been restored include the Gothic wooden door, the impressive wooden staircase, and the second floor’s wooden ceiling bearing the Taylors’ Guild Seal (1597).  Beautiful stucco floral motifs adorn Casa Luxemburg’s colorful façade. Inside the house there is now a hostel with the same name.

Few houses left after the Luxemburg House, we find The Hermes House, which is actually my favorite building from the Small  Square. It was built between the years 1865-1867 and it used to be a club , library, exposition center. Now it hosts the Museum of Universal Ethnography Franz Binder. This house was built in the most centered point of the town and Saxons representatives and royal judges have lived in it. From the architectural point of view, it has a neo-gothic style, which actually makes it unique in the Small Square.

If you turn your head from the Hermes House, you will see the tower of The Catholic Church of Sibiu. It was built during the years 1726-1733, in an early Vienna Baroque style. I have never visited the inside of the church, but it’s open every day until 7 in the afternoon and the entrance is free. 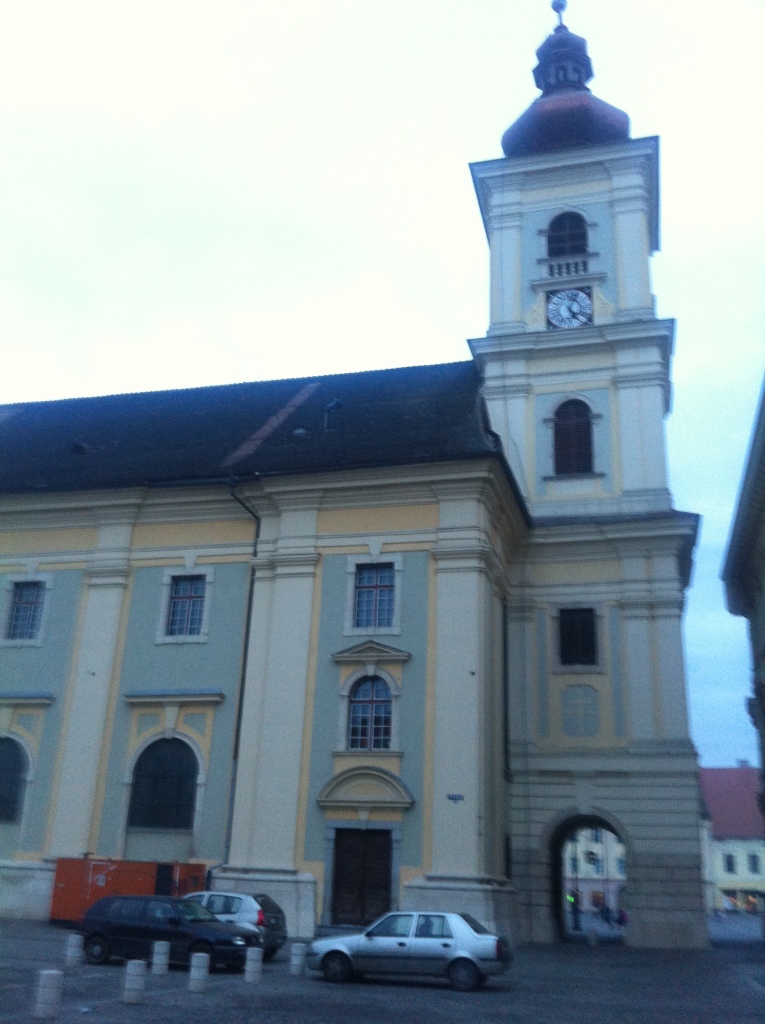 Going left again, but this time heading to the North, you get to The Advice Tower (Turnul Sfatului). The tower makes the connection between the Big Square and the Small Square through a tunnel. Archeologists claim that the tower was built at the same time as the second defensive wall, between 1224-1241. You can get inside the tower through a small door, from here a spiral staircase leads to the upper stores. It gained its form through many modifications, from the original tower only the first store remained, because in 1586 the towers upper stores collapsed. The tower has a total of 7 stores and for a fee of only 2 Lei you can go up on the 7th store and have a great view of Sibiu. It is open every day from morning until 8pm.

Left again and here you are in front of The National Museum of Pharmacy. The founding of the Museum in the city of Sibiu was double motivated: on one hand, this is the place of the first documented apothecary, mentioned as early as the year 1494; on the other hand, a rich tradition of pharmaceutical activities developed in the area. It has Gothic and Renaissance features, dating from the year 1568. In this very building has functioned one of the oldest apothecaries in Sibiu, the third in chronological succession, founded around 1600 and named At the Black Bear. The Museum’s collections comprise over 6600 pieces, bringing valuable evidences about the evolution of medication and pharmaceutical techniques for more than three and a half centuries.

Somewhere in a dark corner of the square, three houses to the left from the Pharmacy Museum, there’s The Goldsmiths Stairs Tower. This place seems to be considered the most romantic place of Sibiu, so it’s definitely worth a walk in the evening. Here you will see old houses, some of them from the XIII century.

Left again and we get to the Sala Fresca (Fresco Hall). It has a vaulted structure and presents mural paintings of high value among which a judgment scene that comprise the year 1631, a biblical scene, an allegorical composition and a hunting scene. The ceiling presents a stucco coat of arms made of polychrome plaster and the year 1694.

Left again and we get to the last one on our list, Casa Artelor (Fine Arts House). Initially being the  butcher’s market place, documented in 1370, later on it belonged to the cloth tradesmen and in the XVIII century it was used as a cereal warehouse. In 1765, for a short time it was used as a theater hall. Starting with the XIX century it became the town office of the butchers. On the 1st of October 1920, the Reunion for Children’s Protection  ( which took care of 200 poor children) opened the Schatzkastlein shop ( the Treasure Chest of Drawers). The gallery was forbidden in the years 50 of the XIX century  and it was reopened during the initial restaurations between 1968-1972 by Otto Czekelius, the town architect.  In the XX century it was used as space for the temporary exhibitions organized by the Brukenthal Museum , that is why it was later on called the House of Arts.
The ground floor rooms  presently  host  the Art Galleries of the Astra Museum. On the 1st floor there is the hall of temporary exhibitions belonging to the Museum of Saxon Ethnography “ Emil Sigerius”, the warehouse for the museum collections and the conference and expositions  hall.

It is a rectangular building made up of basement, ground floor and first floor. The main frontage is characterized through the equal rhythm of the 8 semicircular archways in the ground floor on massive brick piles widened towards the basis having 8 correspondent widows at the floor.

These would be the main buildings of the Small Square, however all of the houses that are here, are preserved monuments and all have a specific style. What is quite special about some of these houses, but also about other houses outside of The Small Square are the so called ‘Eyes of Sibiu’. In the tall attics of the houses, there is normally a pair of windows that looks like a pair of eyes. In the Small Square there is one building which has 5 eyes instead of 2. 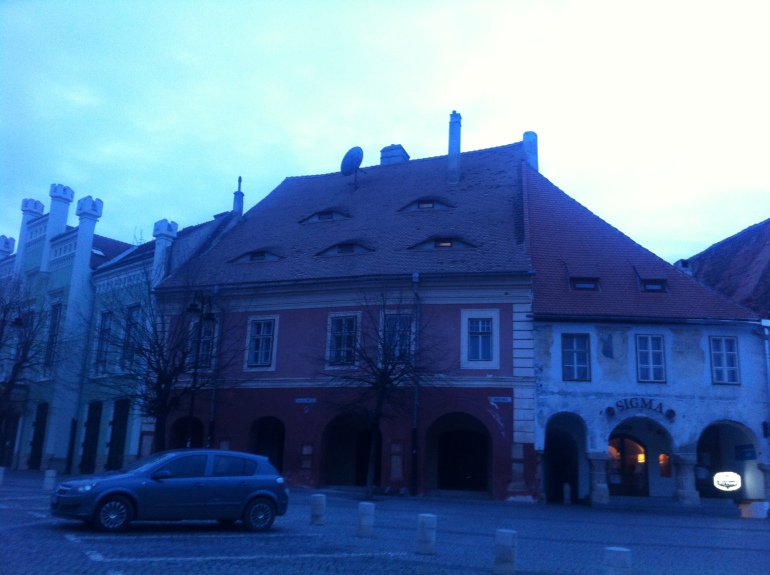 Now let’s switch from history to relaxation and having fun and let’s see what there is to be done in the Small Square. I will mention the ones that we usually go to and the ones we like most. Some are just pubs, some also serve food, some even organize parties during the weekends.

Old Friends and More Pub. It just got redecorated and it’s our number one favorite place in Sibiu for going out for a beer in the evening.  There is nothing to special about it, but it has a very nice and cozy atmosphere, it just makes us feel like home.  It’s open every day from early in the morning so you can go and have a nice coffee. If it’s summer, I suggest you stay outside on the terrace and see how the town wakes up to life. On Fridays and Saturdays from 8:00 to 8:59 PM they have this special offer – you pay for one drink and get three (except beer).

From time to time, here you can find a nice electronic music party during the weekend.

Einstein Cafe is also a good choice for having a drink. They have a big terrace during summer time so for sure you will find a place to enjoy a chilly summer evening in Sibiu. They also serve food, the menu offers you basically pizza, salads and pasta.

Aviator Pub is again a place we like to go quite often. There are often electronic music parties there, especially on Thursday night and the bartenders are the masters of cocktails. If you go there ask them for a cocktail, you will be more than impressed.

Bohemian Flow Art&Pub is a place that for quite some time organizes parties almost every night from Thursday until Saturday, so if you want a wild night, this is the place to be. For the summer time it has a very nice terrace in the backyard, away from everything that is happening in town. 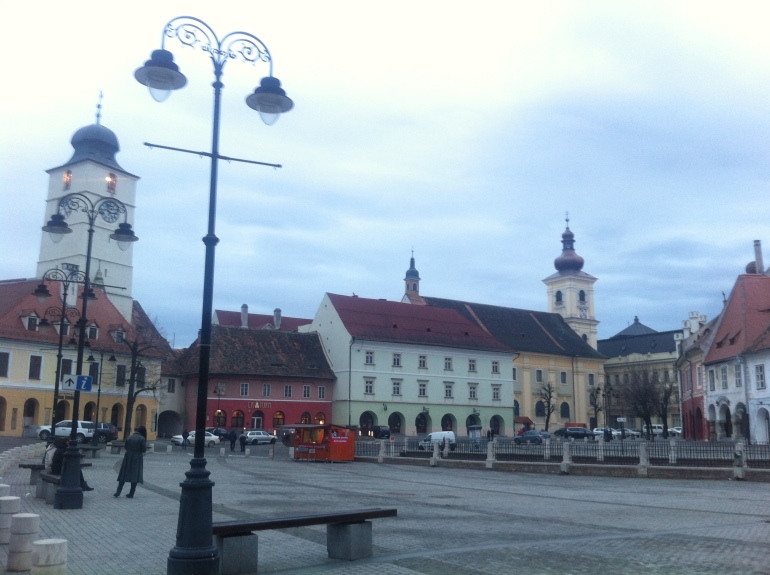 Music Pub is one of the biggest pubs in the Small Square and it has one of the best pizzas in Sibiu. Try the garlic sauce for pizza and if you are a large group you should go for a Family Pizza.

Tango Grill is rather a restaurant, but you can also go for a drink. It has delicious dishes and it’s one of our favorite places for eating out. Everything from cream soups to pasta, sea food and deserts is just delicious. They also have fresh and tasty lemonade.

KulturCafe is another pub in the Small Square where sometimes there are parties during the weekend.

Crama National is a place only local know about, but if you get the chance, don’t hesitate to go there. The owner, Don Titi, is also the bartender so he will always be there to serve you. He has some traditional snacks, some bread with pork fat, or smashed beans or a traditional vegetables mixture. A must try. This is one of the oldest places of the Small Square and it might be the only place where the staff will make you feel relaxed, you will laugh a lot and enjoy yourself. Don Titi aslo speaks Hungarian, French and German.

Reflektor is a place that opened recently in the Small Square and is a cafe where smoking is not allowed (in Romania smoking is still allowed in all public places) and they only serve low alcohol beverages (light cocktails). They have all sorts of events there, including film and documentaries projections.

Some places we haven’t been to, but heard that are quite good : Atrium Classic Caffe andLa Turn Restaurant.

Not quite impressed about Go In, Union and Crama Sibiana, so maybe it would be better to go for another option than these ones.

This would be a description of the Small Square in Sibiu. It would consider it a place for the locals, there are few tourists who visit it, most of them prefer the Big Square. But if you are looking for local fun, drinks and food, this is your starting point.

In the city, My Sibiu, Romania, transylvania