[Serbia] Sightseeing and dining in Belgrade

We got to Belgrade on a winter Thursday night, after some 6 hours drive from Sibiu, with not too many expectation, but still with a good feeling that the trip wouldn’t disappoint us. We found a city full of life, culture and charm, vibrating from all its joints.

Serbia exists as an independent state only from 2006 onward, but before that the Serbian territory had lived a hectic history. With Ottoman occupation in the XIX century, with Austro-Hungarian occupation in the XX century, with being part of a bigger state that included today’s Croatia and Slovenia, with then being part of a state that included Montenegro, with being a communist country until 1989, with the history of Kosovo and the bombing of 1999, Serbia is now finally living some more quiet times. 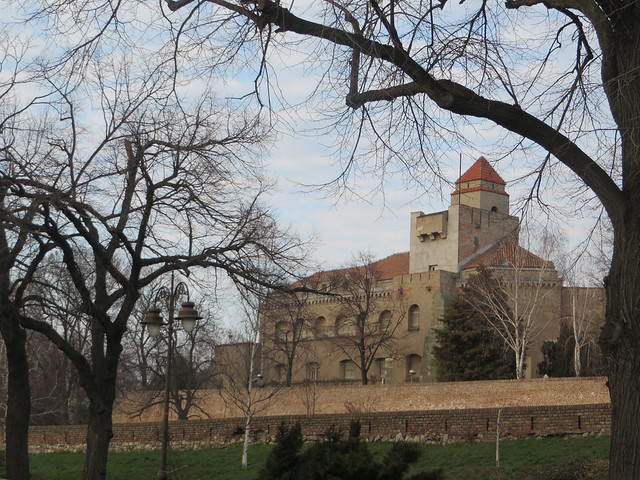 Belgrade is the capital city of Serbia and it reflexes from A to Z all the stages of history that Serbia has gone through. Still, leaving aside the past, Belgrade was such a pleasant surprise and with a thorough research before the trip, we had the chance to feel the city’s good energy at its best. Cool and young people, vibrant night life, authentic architecture, hipster bars and fancy restaurants it to say the least about this city. 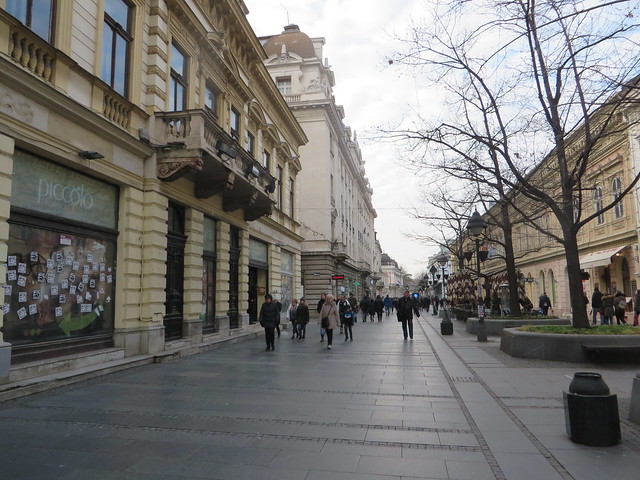 We got to Belgrade on a Thursday around 11 PM and the first impression was that this city is too alive for that hour of the night. Full of cars and people on the streets and Christmas decorations everywhere, even it was already end of February. About this one, we found out the next day that the municipality likes spending money on useless things and considers that the city looks much better with all the Christmas lights on. 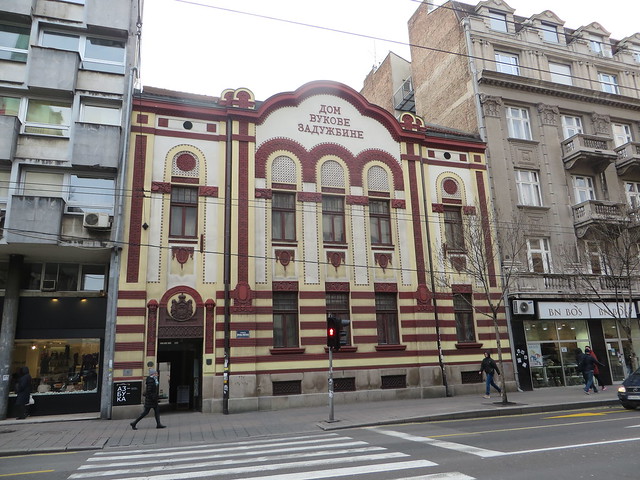 On our first day in the city, we decided to take a free walking tour. It was the first time we did this and it wasn’t a bad idea at all. Belgrade Free Tours is an non profit organization that runs 3 different tours almost everyday in the city. We chose the 20th century one for the day and for 3 hours we had a walk around the city. The guide, a young and charismatic girl, told us a lot about the city, its history, its political and economical situation, about the architectural style and about the changes that the city has gone through in the recent years and where it’s heading. 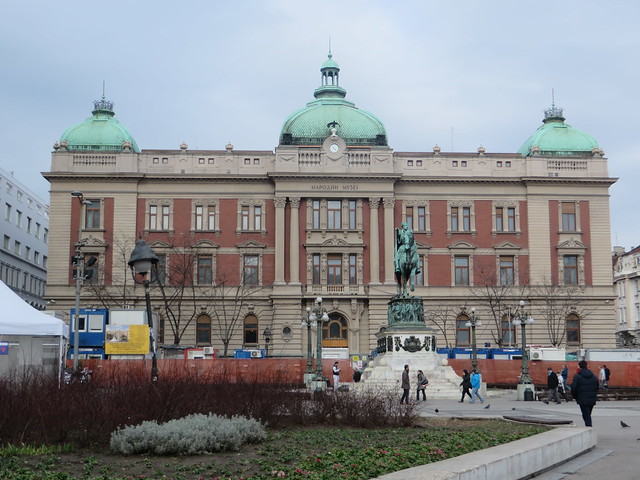 In terms of architecture, the city is a mix of everything. The oldest part, the Belgrade Fortress was first mentioned in the 3rd century BC and for many centuries it was where the population of the city mainly lived. The Fortress and the park surrounding it, Kalemegdan, lying at the confluence of the rivers Sava and Danube, are the main attractions of the city. 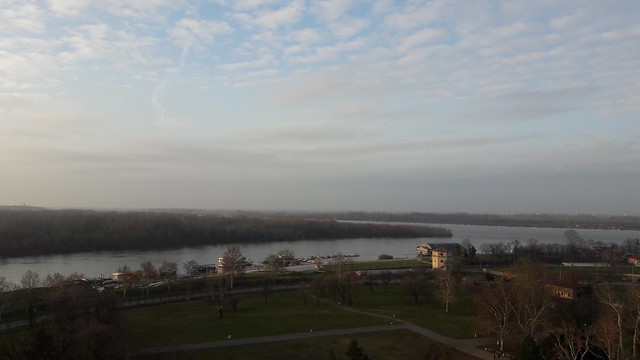 In the 19th century the city revived and buildings belonging to the neoclassic and romantic currents showed up, to make the city look more like a modern European city of the era. Some of these buildings were destroyed during time, but the ones still standing today, give the city a classical feel. 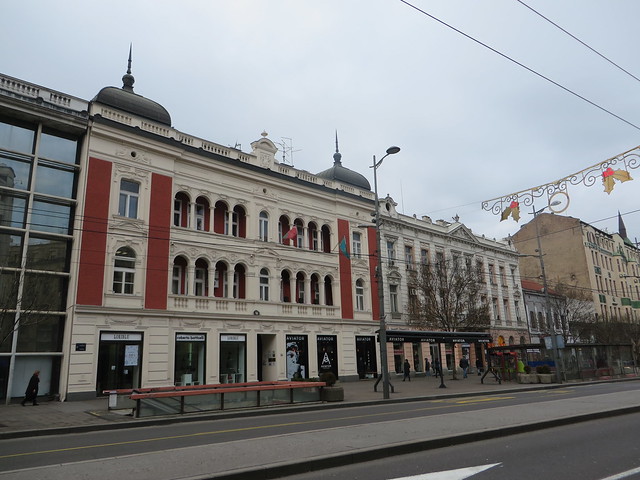 The 20th century came with an art nouveau influence and the Communist era brought the brutalist architecture, with tall buildings that had no esthetic characteristic at all and were mainly meant to quickly and cheaply house the huge influx of people from the countryside. Now modern buildings are built in an area call The New Belgrade (Neo Beograd), with blocks of flats and office buildings. 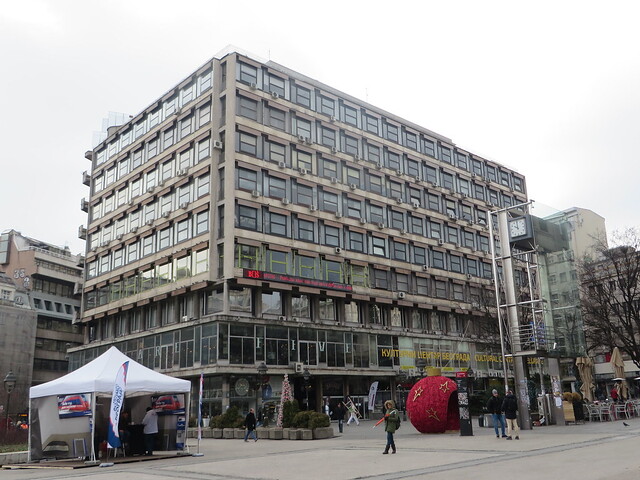 The city is reviving, with lots of young people, it’s an European capital where you have culture (film festivals, concerts, theaters), you have nightlife (with clubs open until late in the morning), you have restaurants trying to bring out the best of the dining experience, you have history and architecture. 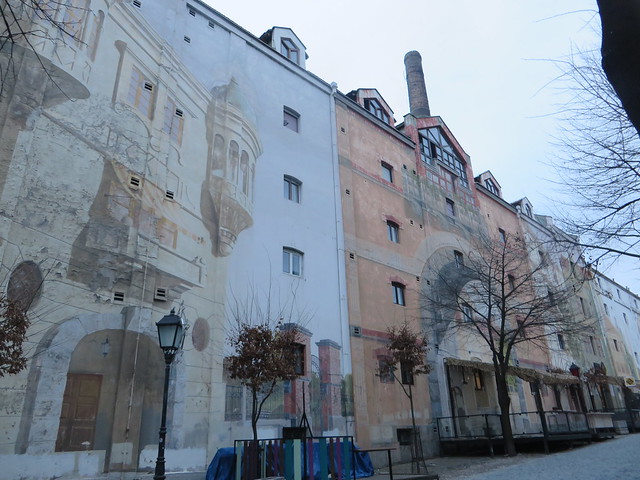 The time spent on the streets of this city convinced us of one main thing – that we have to visit it during summer time, because everything looked so promising even on a winter cold day. We could only image what this city feels like when the sun is up and everything is green.

Places to go out

As it was winter when we visited the city, we did have to make lots of stops during the day to get warm. A good excuse actually, to try some new recipes, to check out some places I’ve previously read about online. So here’s a list of the restaurants we checked out – I’ve chosen them based on some recommendation from some local friends and based on what I found on other blogs and websites that promote a rather off the beaten track experience.

This place was such a great inspiration for a warm lunch. Small and cozy, with a simple, but elegant interior design, Miamiam offers all the warmth you’re looking for after wondering on the streets of Belgrade. Not too mention the super tasty Masala Tea that gives you the extra warmth needed to explore the menu and decide what to order. 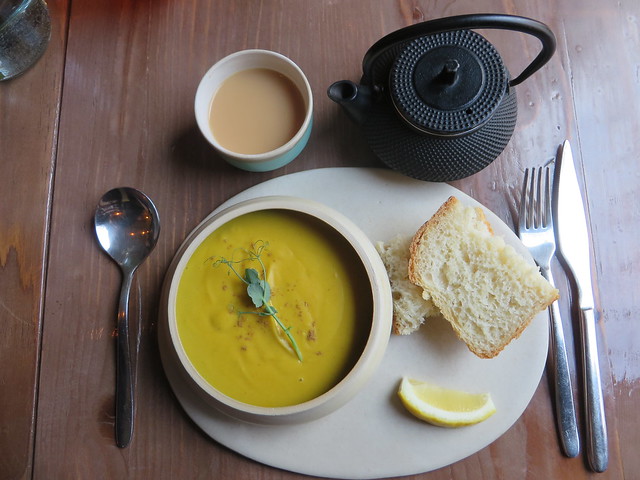 Being a larger group offered us the chance to taste almost all the dishes available on the rather small menu. We started with some soups (the lentil and coconut one was pure heaven) and then tried basically all the starters they had. Everything was super tasty, with much attention given to plating, but I would go again for sure for the roasted beetroot and avocado salada and for the veggie fritters. 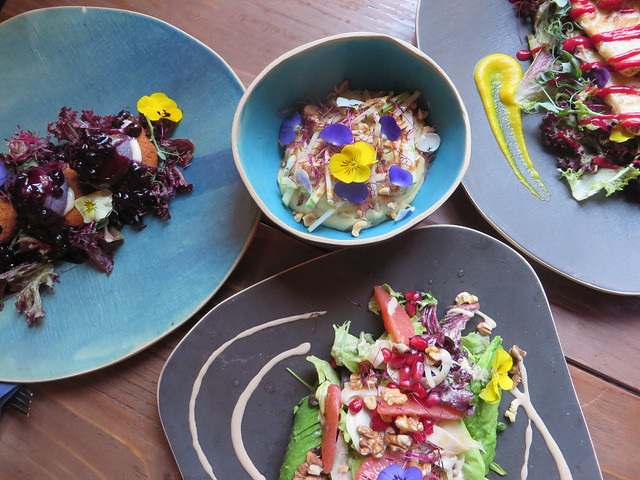 Dva Jelena si the classical traditional Serbian restaurant, so specific to the Eastern European countries. Living in a country similar to Serbia, for us it wasn’t something too out of the ordinary or impressive, but still the experience was, to say the least, unique.

The restaurant is one of the oldest and biggest in Belgrade, with about 400 sitting places. It has a very rustic look and besides dinner, you might be lucky enough (like we were) to enjoy a live concert of traditional and folk Serbian music. After a few shots of rachia (local traditional alcoholic drink made mainly of plumbs), you kind of start to enjoy the show.

As for the menu, expect the heavy stuff that Eastern Europe is so used to. Big portions of meat, combined with potatoes (in all forms – fried, baked or boiled), all sorts of stews, soups full of vegetables and meat. Extremely delicious, but you might need some more time to digest than after a light salad. Still, the place needs to be tried out, to see a different kind of dinning. A must try when there is the garlic bread – it’s something we continued eating even after we just could ingest anything anymore. 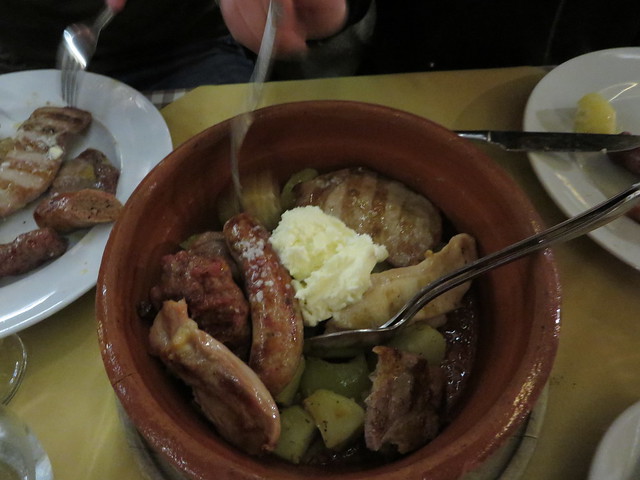 Hidden a bit from the main street, in a beautiful backyard, with a lovely summer terrace and a very chic interior, this is the locals pick when in search of an authentic experience in the world of the Mediterranean (Greek especially, but also Middle East, Italy and Spain ) cuisine.

We got here for dinner and were lucky enough to get a table for 5 without a reservation (although on a Saturday night, that’s not normally possible). The staff was nice and friendly and managed to get us in and let us explore the endless meze menu they had. 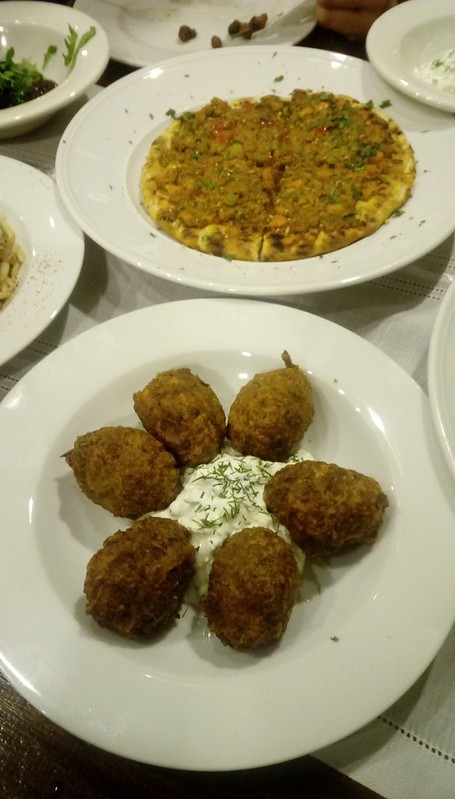 We started with the house wine – brought from Greece, from local and small vineyards and continued with basically almost all the starters they had on the menu – from eggplants, to cheese, olives, fava beans, beef or pork kebabs, lamb samosas to sea food. Everything is incredibly fresh and full of flavor.

With a motto like theirs – ‘Soul Food’ we just couldn’t have said ‘No’ to a some sort of brunch on a Sunday, with a bit of hangover after partying until the morning. This place is probably the most hipsterish one in Belgrade, with a cool interior design and with really cool people who come and eat here.

With a menu that changes twice a year, depending on the available ingredients, expect to find a one-pager full of taste, color and flavor. Nothing fancy, a bit of everything, from every corner of the world. 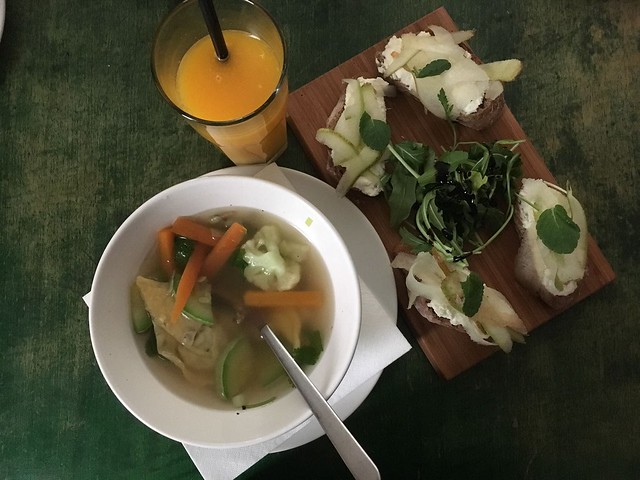 What we absolutely loved here were the Wan Tan Soup, the Pear and Ricotta bruschetti, the tarte flambée (made exactly how they should be, with a very, very thin dough)and the Parmigiana di Melanzane (a very tasty moussaka with eggplants and feta cheese). All together with some local craft beer, to make the hangover go away quicker.

I have to admit that I chose to leave this place for the end, as for us, in terms of eating out in Belgrade, it was, to say the least, the cherry on top of the cake. It was a recommendation from a local friend who said that if we really want to experience the Serbian new cuisine, than this is the place to be.

The place looks very stylish, set in a beautiful house, in the city center, but away from all the city noise. Having dinner in the summer time, in the lovely terrace they have outside, must be a true delight.

The menu is built on some of the Serbian traditional recipes, with local and fresh ingredients from the market, but giving every dish a touch of modern and creativity. Let’s call it fine dining, but in terms of how rich and carefully prepared each dish is, not necessarily in terms of high prices and formal atmosphere.

The menu is just a few pages (and has a really cool design), but has everything you could want – all sorts of meat dishes (including the lamb dish and the duck breast dish that we tried and that were super tasty), vegetarian, starters and last, but not least desert. Which for us was an absolute experience. All home made, with a perfect combination of sweet, sour and mint flavors.

In terms of pubs and bars, we didn’t check too many. One Friday night we stopped at The Black Turtle for a few craft beers that they produce in their own brewery. And for Saturday night, being some electronic music passionate, we chose Drugstore Beograd.

This was our extended weekend escape in Belgrade, a very nice and pleasant surprise for us and one of the places we are sure we will check again – at least on warmer days. 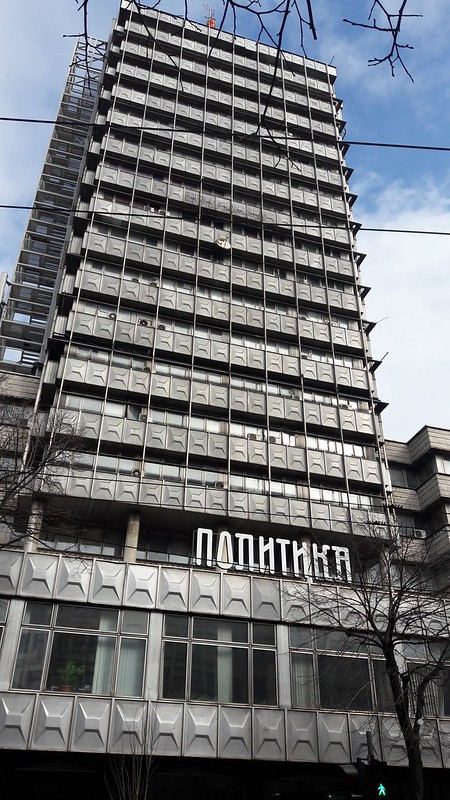 This is the map of the trip – it includes all of the places we had in mind to check, but didn’t manage to.