[France] Pays Bigouden on a plate – a food guide

Spending 6 days last summer in Pays Bigouden with a local (and not any kind of local, but one very passionate about food and gastronomy) meant that we could spoil our taste buds with everything fresh, tasty and authentic this region has to offer. I took notes responsibly and here is Pays Bigouden’s gastronomy story.

Heaven is a place on earth, for sure, after having a vacation with a daily dose of crêpes. And after finding out that they are actually originated in Brittany (Pays Bigouden being a small region of Brittany). So here we are, in the land of crêpes, tasting the original ones with all sorts of fillings. The breton crêpes are normally made of wheat (in which case you have a sweet filling – marmalade, honey, chocolate, you name it) or buckwheat (in which case you have a salted filling – which can be anything from cheese, eggs, bacon, butter or a mixture of these). The ones made with buckwheat are also called Galette Breton, and you normally find them looking like in the picture below, not rolled like we would do for the wheat ones. 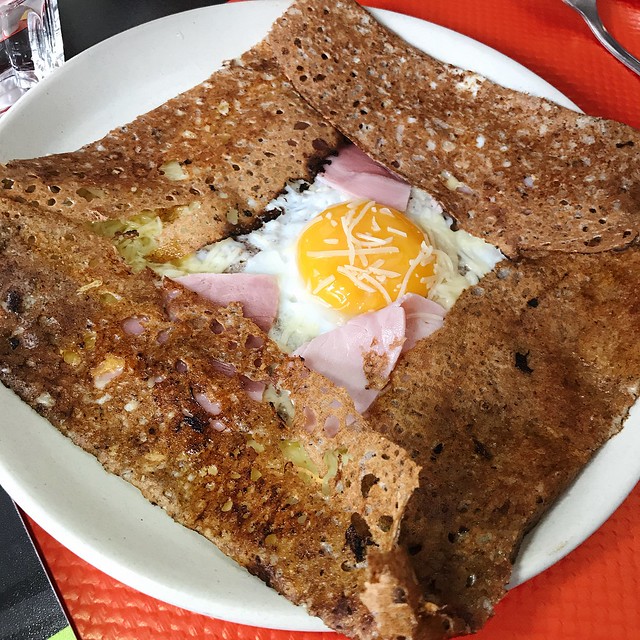 According to legend, the Breton crêpe originated with the clumsiness of a farmer’s wife, who split some buckwheat porridge onto a very hot, flat stone lying in the fireplace.

Well, of course, sea food – you’re by the ocean and people still make a living out of fishing. Anything you can imagine or want to taste is here. Fresh fish, oysters, shrimps, langoustines, mussels, lobster, plenty to chose from. Must try are the langoustines as Loctudy (one of Pays Bigouden’s communes) is known for fishing les demoiselles de Loctudy (langoustines). There are restaurants specialized in sea food, with years of traditions behind, and there are small fish markets where you can buy anything freshly taken out of the ocean. 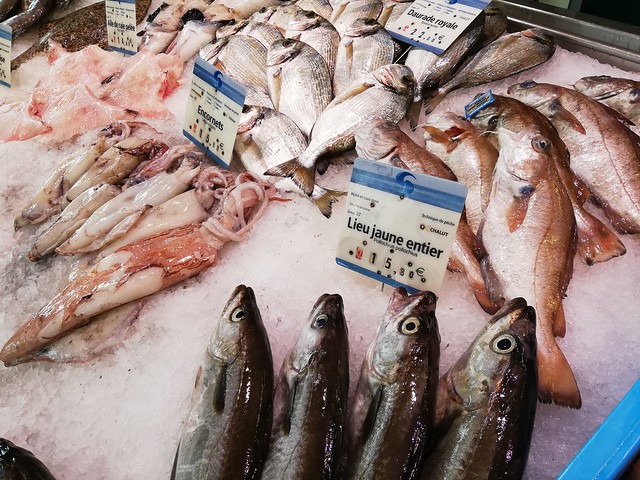 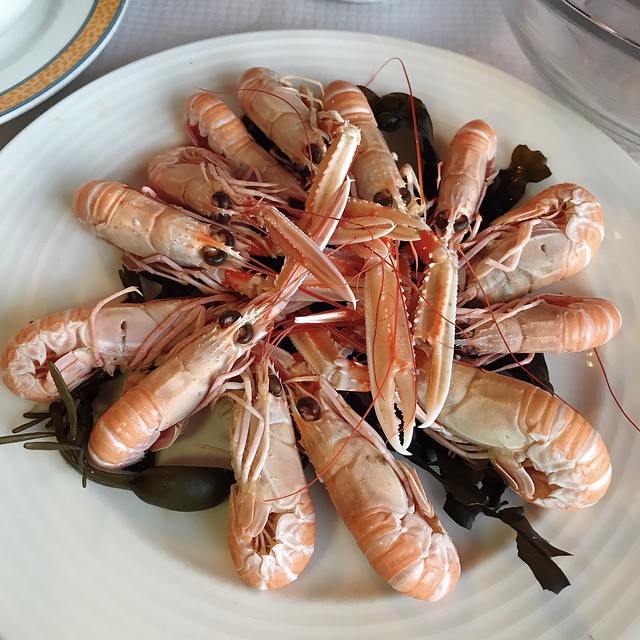 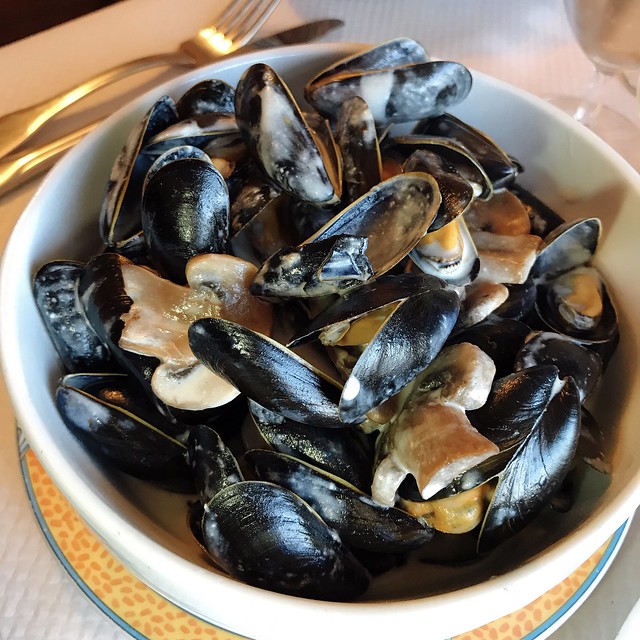 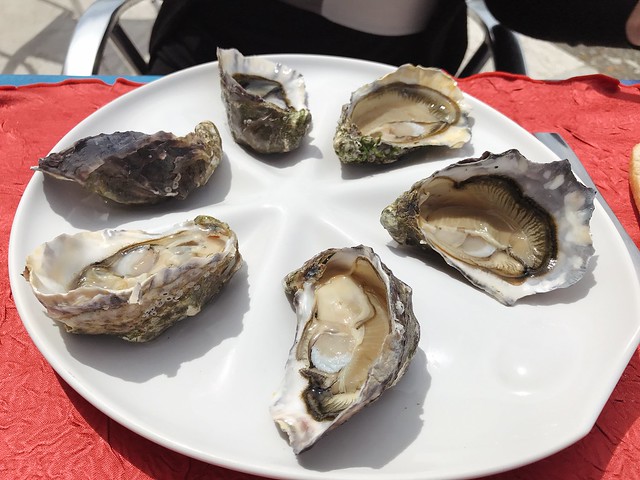 A very local and still hanging to quality and traditions is La Compagnie Bretonne, specializing in canned fish, of all sorts and in all kinds of combinations. Sardines, tuna and other types of fish canned with olive oil and lemons, tomatoes sauce or olive oil and tarragon – excellent for days when the fridge is empty and you’re starving. 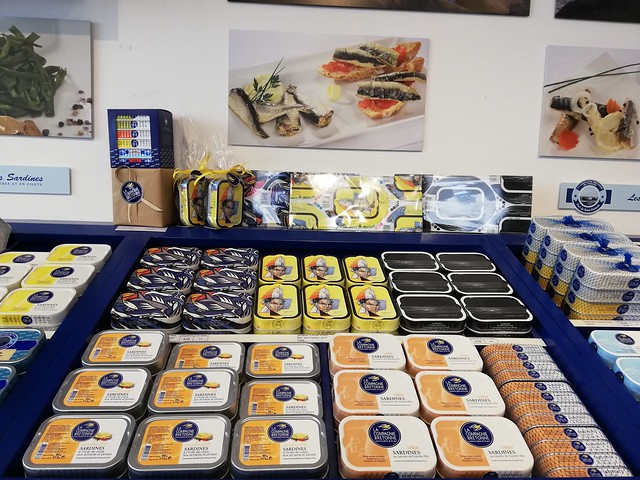 This local salted butter is probably what got me my 4 extra kilos at the end of our vacation in Pays Bigouden. It’s addictive, and for good reason with a perfect taste like that. Brittany used to have no taxes on salt which meant that they could use it more, allowing them to better preserve their food. They added a bit extra in their butter, again to preserve it longer, but they also realized that this would also accentuate the natural flavors in the milk used to prepare the butter.

France in general has a very strong and long relationship with butter, but this area is for sure sticking to its salted butter, when using it for cooking, filling crêpes or just spreading it on a fresh baguette.

When Guillaume told us the story of the Pays Bigouden salted lamb, us being fans of everything that has to do with lamb, we immediately started drooling. Sheep in this area are grown and feed in salt marshes, some sorts of pastures right next to the ocean where grass takes the salt from the ocean and has a rather different taste than grass on mountains, for example. Sheep eating this salted grass end up in having a naturally salted meat, considered by many to be a true delicacy. 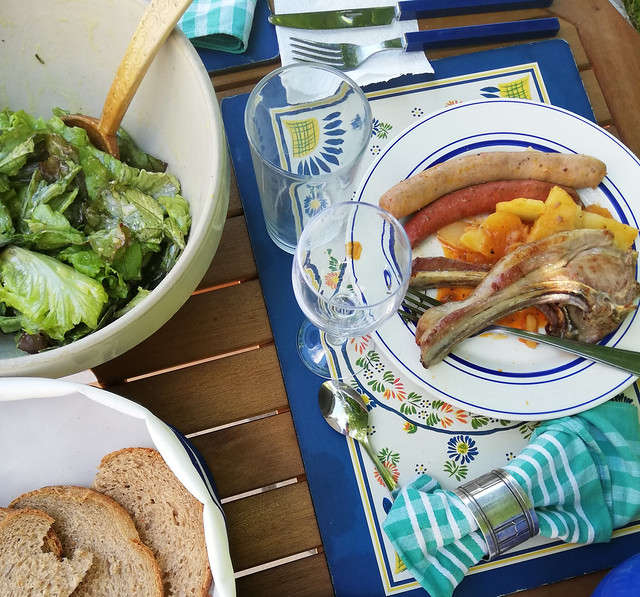 It is a sort of vol-au-vent, generally consisting of a puff pastry crust filled with a salpicon and a thick sauce. The ingredients found in a bouchée à la Reine vary according to the recipe used, but it usually includes chicken breast, veal, quenelle or ham, all blended with a sauce of butter, flour, eggs and cream. Mushrooms are often an essential part of this recipe. There are also seafood versions of the bouchée à la Reine.

Back to the sweets heaven, meet these two ladies. Gateau Breton is a round and soft cake with a golden crust, with a crumbly texture. It is mainly made with salted butter (again some extra butter in our diet!), flour, sugar and egg yolks and filled with prunes marmalade, salted caramel, raspberries cream or any other jam, marmalade available. It is supposed to have at least 20% butter otherwise it won’t be considered a true gateau breton. 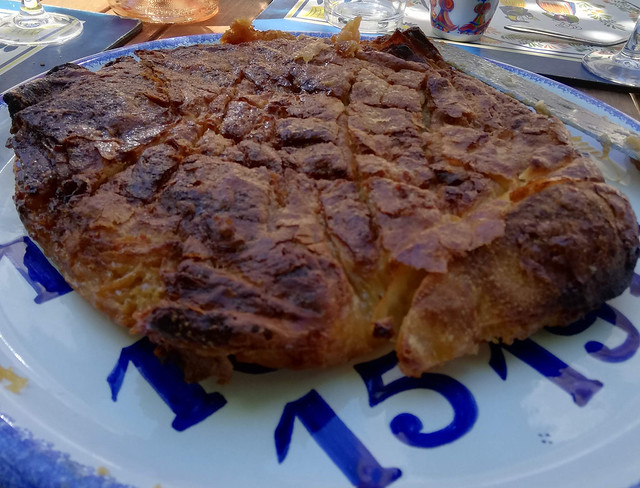 Kouign Amann is the lesser known dessert of Brittany. Considered by the New York Times to be the “fattiest pastry in all of Europe”, this is actually a multi-layered cake. Originally made with bread dough (nowadays sometimes viennoiserie dough), containing layers of butter and sugar folded in. The cake is slowly baked until the butter puffs up the dough (resulting in its layered structure) and the sugar caramelizes. We didn’t get the chance to try Kouign Amann while in Pays Bigouden, but I’m sure that would have translated in one extra kilo in weight for us.

Located in Pouldreuzic in the heart of Pays Bigouden, the craft cider house Kerné is the oldest in Finistère. Founded in 1947 by Pierre Bosser in a traditional cut stone workshop, it was then developed by his son, and later on by his grandchildren, maintaining even today the craf manufacturing method and remaining faithful to its values, quality and know-how. The apples come from orchards in Pays Bigdouen and they are turned into apple juice and delicious cider, both perfectly complementing the Pays Bigouden gastronomy. They are easily found in many shops and restaurants in the region.

Some more about Pays Bigouden: