We are slowly getting to the end of our trip, here we are in our 6th day of trekking, going from Richiş to Alma Vii, through the forests and over the pastures, for about 15 kilometers and 5 hours in total. 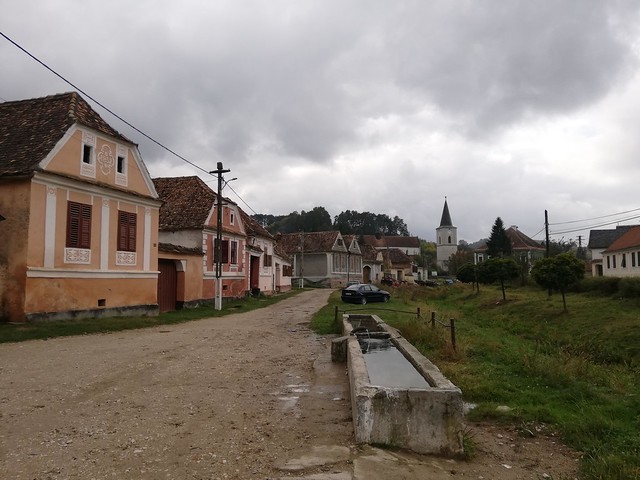 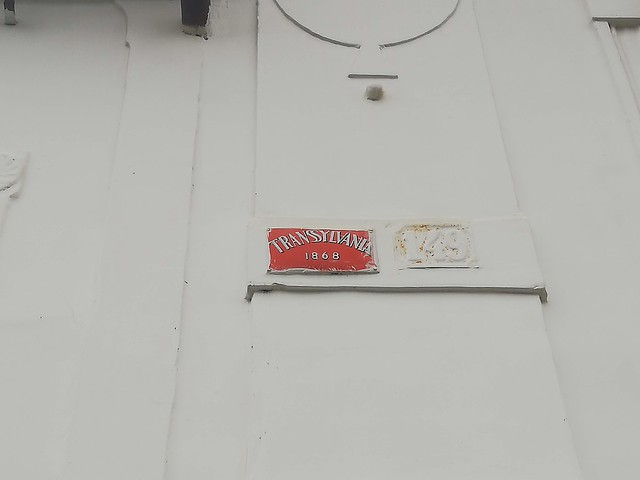 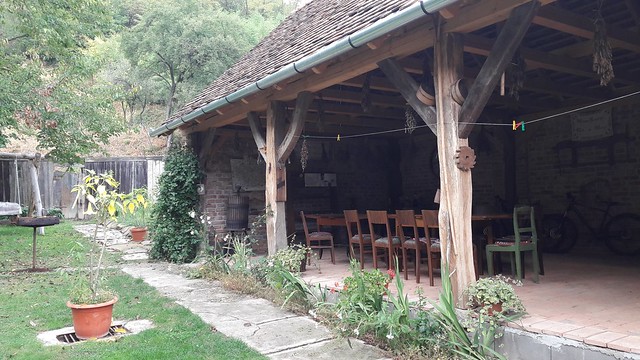 About Richiş there’s so much to be told. We have visited this village many times before and it’s one of our favorite Saxon villages form Transylvania. Before Richiş became one of the most prosperous communes in the land of Mediaş and before hardworking people founded the locality, the place was harsh and swampy. Only wild animals lived among the reeds, willows and thorns. In memory of those times, the elegant coat of arms of the commune was created, a herd walking gracefully through an infinite pond, guided by the stars under a red sky. More info on the village and its beautiful fortified church HERE and HERE.

People have been living here since 1283, with Tartar and Turkish invaders breathing on their neck; today they carry on living simple, stress proof lives, while the rest of the world boils in turmoil. 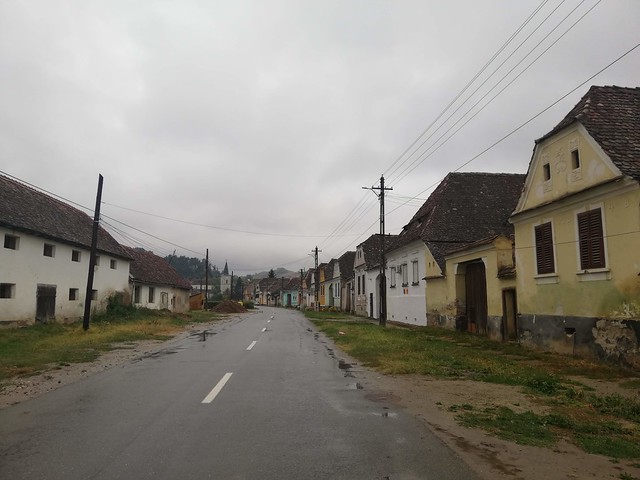 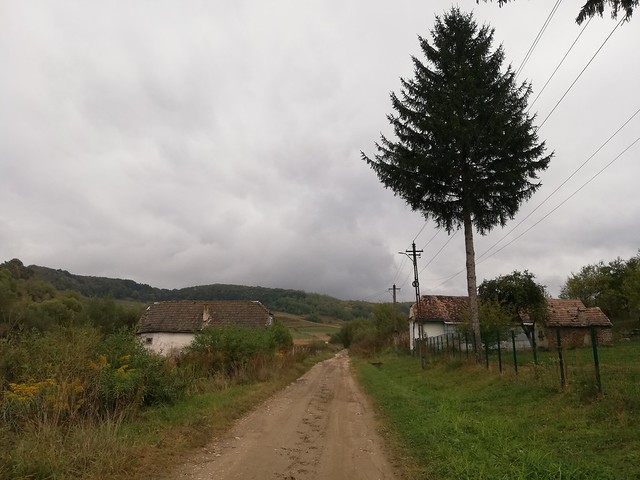 From Richiş we left in the morning, after enjoying a delicious breakfast with our hosts at Villa Rihuini. We followed the same roads as in the previous days, mostly through the forests and over the hills. We started from the center of the village on a dirt road marked with the blue cross

, that was going up the hill and into the dark forest. Although the path was marked, just outside Richiş we had a bit of a struggle managing to find our way to Alma Vii. We were supposed to switch from the dirt road to a narrow path marked with the red cross trail

, but couldn’t find the marking anywhere. We walked around in circles for a while, tried to figure out the way using our phones and GPS and finally we saw a nice red cross mark on a tree, only that the grass and other smaller trees covered it. 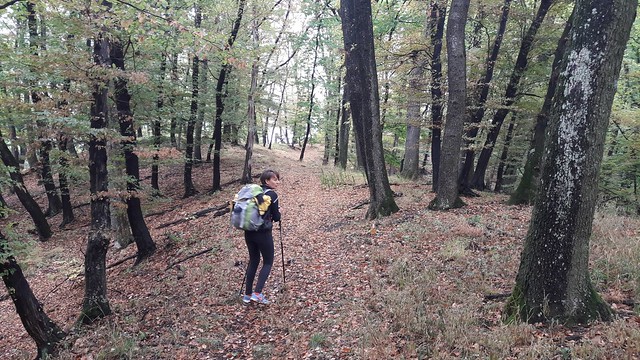 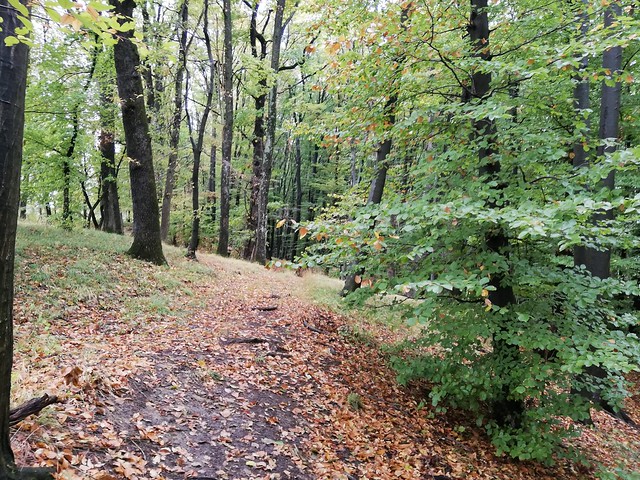 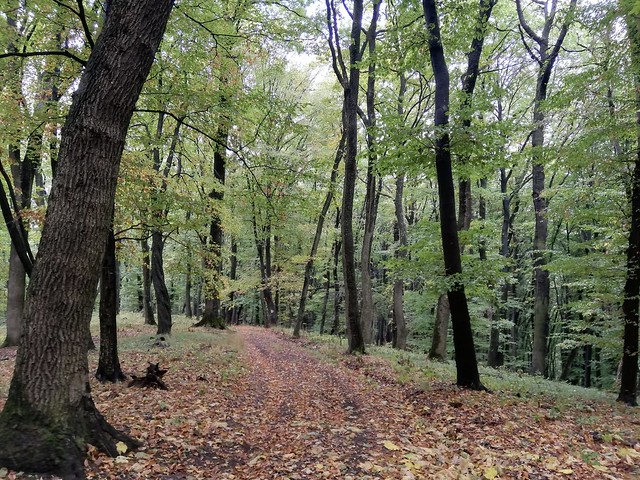 Half of the trip to Alma Vii was through a beautiful forest, rarely visited by people, I could be sure of that. The idea, of course, got me feeling a bit scared thinking that the wild animals could show up from anywhere right in front of us. We made a lot of noise, listened to music, talked loud, anything that would make me feel a bit more comfortable with the forest. 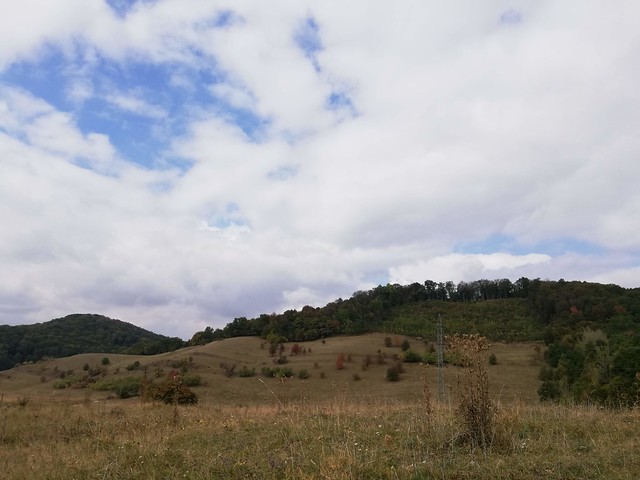 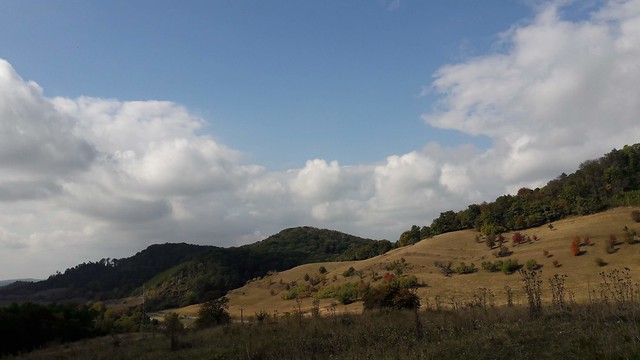 As soon as we got out of the forest, feeling a bit more comfortable and safe, we stopped on a hill for a lunch break, enjoying a bit of sun and the Autumn colors. We decided to take the main road from there on to Alma Vii, as we had only 5 or 6 kilometers to go and I didn’t feel like wandering through the woods again. 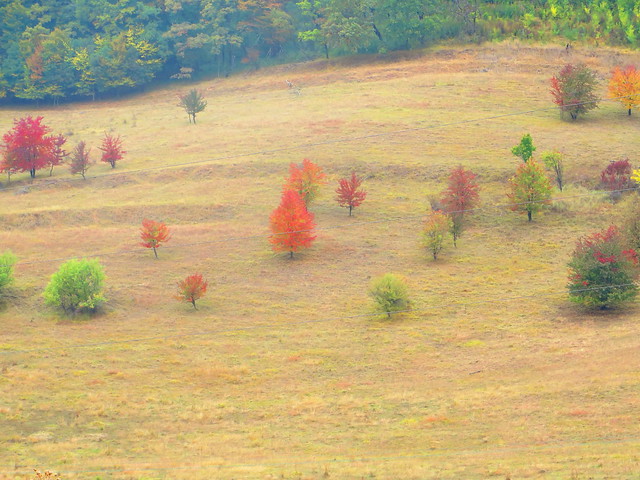 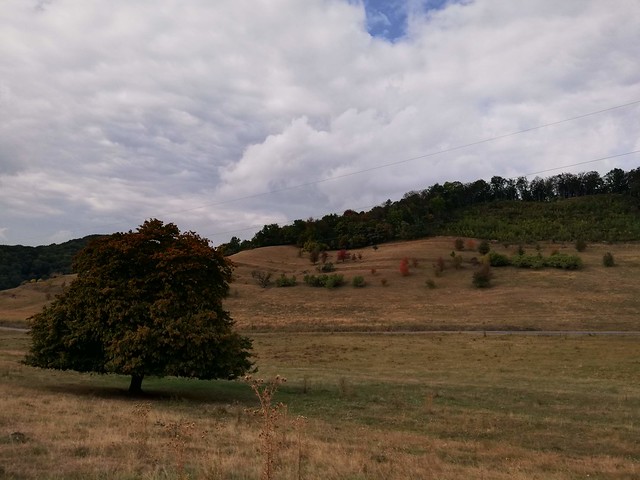 The road passes by a cattle farm and the animals were very curious to see us, as probably they don’t see many people walking on that road. 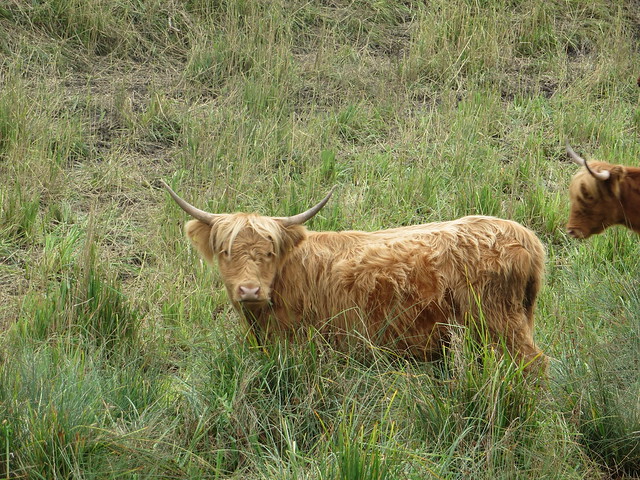 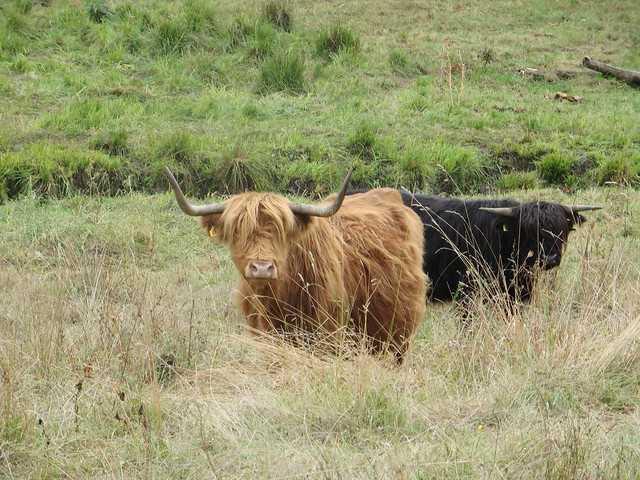 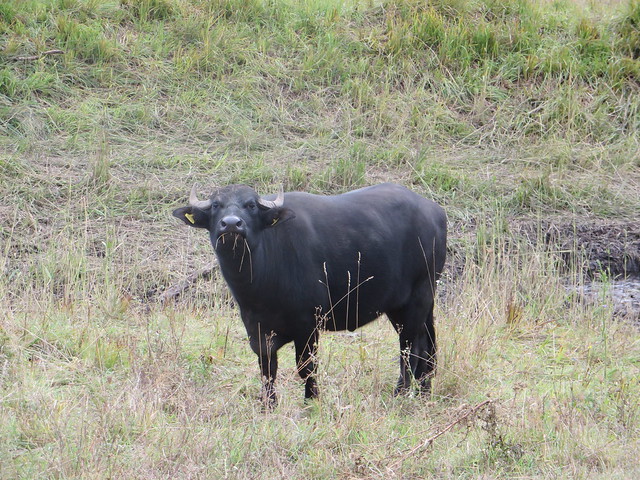 We got to Alma Vii somewhere in the afternoon and took the time to walk around the village and to relax in the garden of our guesthouse (booked via Experience Transylvania). 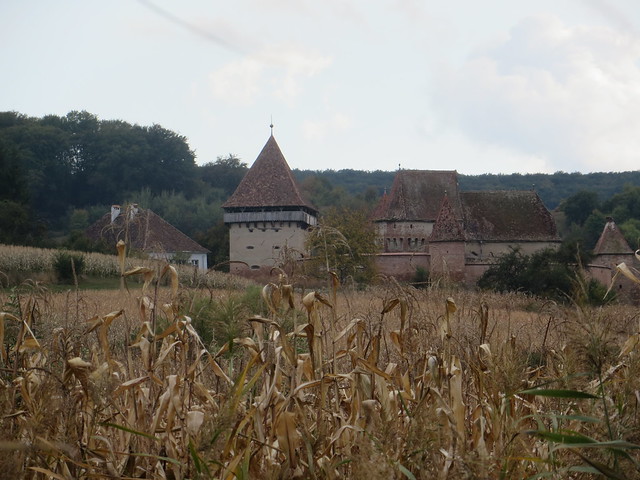 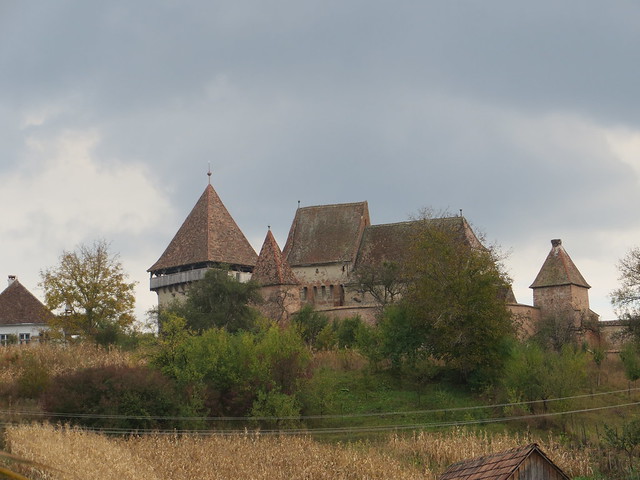 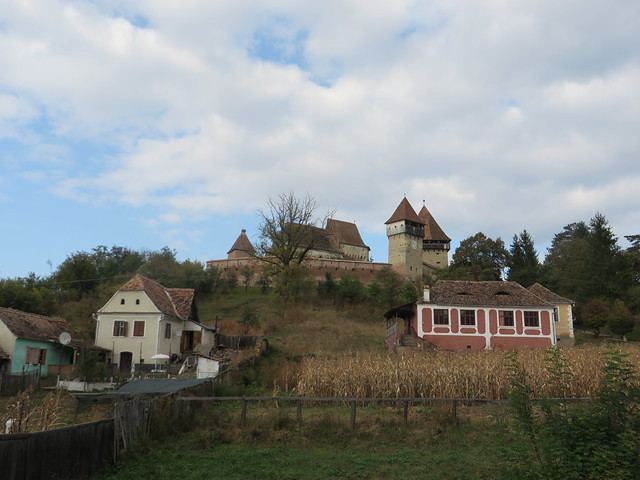 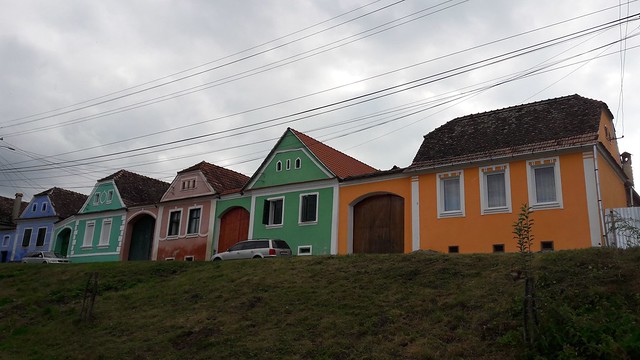 As it was the weekend and there was a wedding in the village, we were hosted in the guesthouse behind the old school. We bought some beers from the shop next door and enjoyed a relaxed dinner on the stairs of the school. We were lucky enough to catch a beautiful show, that is more and more rare these days, the returning of the village’s cattle herd. 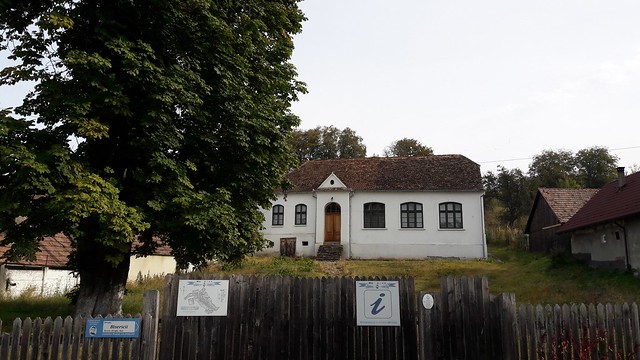 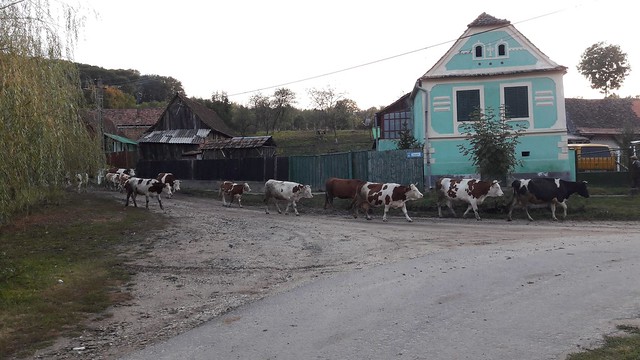 The view from our room, offered us a new side of the fortified church. 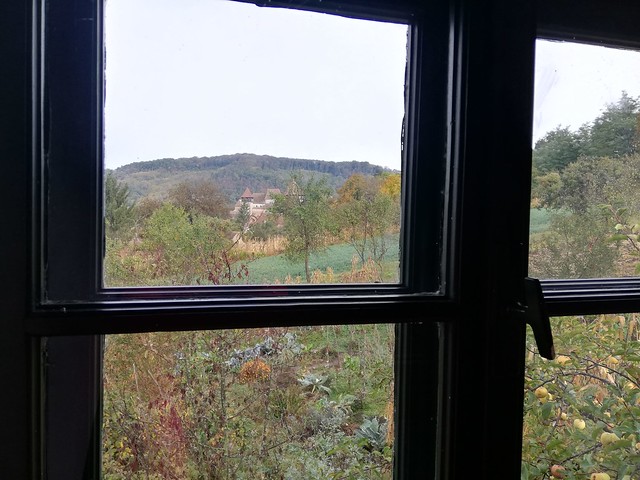 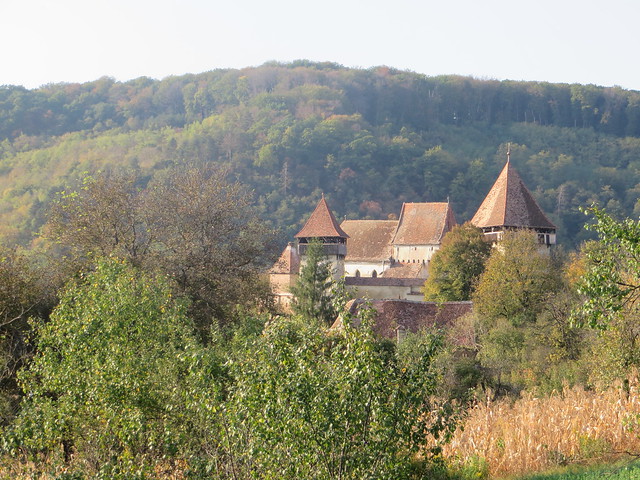 Alma Vii is located at the end of a country road, nestled between forest-strewn hills. The scenery –  together with the fortified church and the rustic houses – form a  truly picturesque view. Since 2009 Alma Vii has been part of the MET “Whole Village Project.” This project has been restoring old building fronts, repairing ancient wooden bridges, and paving the public roads with river rock. 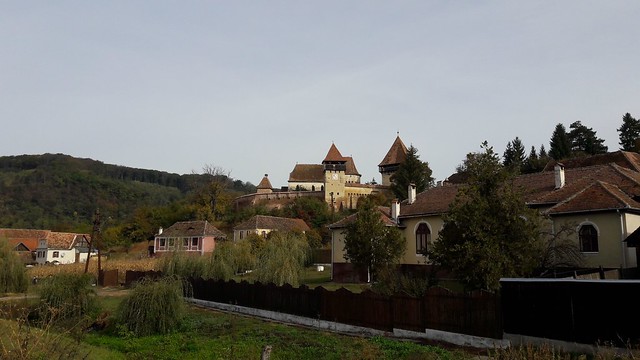 Alma Vii came into being in the year 1289; it was a free village under the Hungarian Crown. Two centuries later, a church was built, overseeing and protecting the entire village. This building was replaced in the 16th century with a more solid fortified church. In the 19th century, sections of the church were remodeled in the late Gothic style. The altar (built in 1852) has four Corinthian columns, plus an architrave topped with a statue of Christ. The lovely Baroque-style organ was installed in 1721. 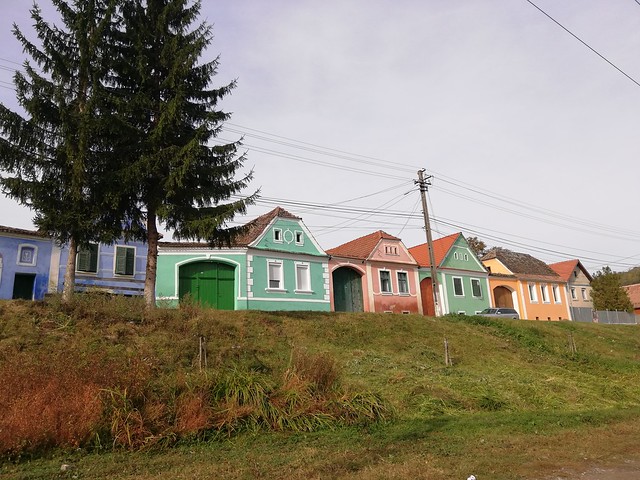 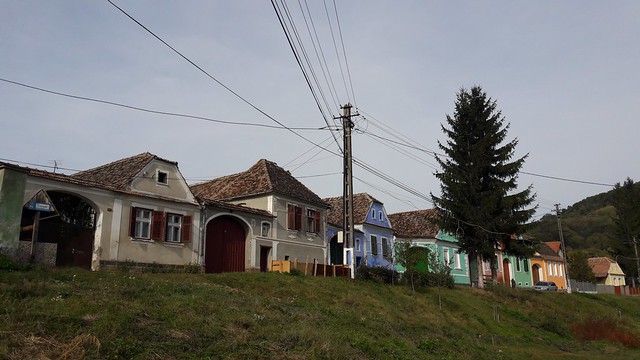 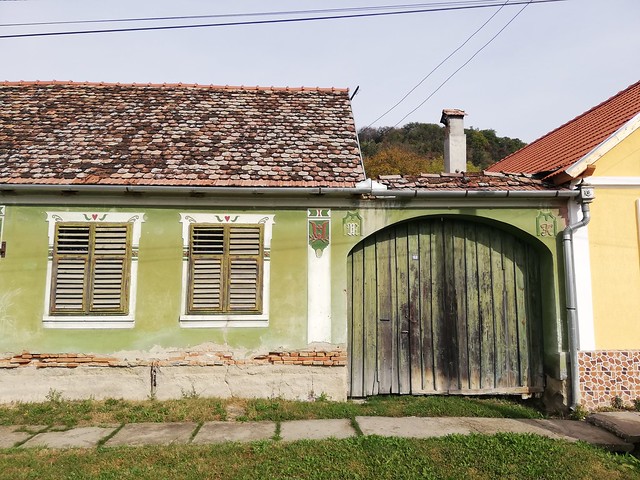 Here is our map of the day: