[Romania] The beauties of the Nera – Beușnița Gorges Natural Park

The trip to the Nera – Beușnița Gorges Natural Park was so much planned and we considered so many times to switch plans and not go there, that I still can’t believe that we actually managed to get there and spend 4 splendid days.

The trip happened from the 1st until the 4th of May and the weather forecast sounded horrible. It was supposed to rain for the whole period, but actually we were incredibly lucky and had a great weather. We left from Sibiu on Wednesday night and stopped in Sarmizegetusa and camped in the Zamolxe Camping.

From there, on Thursday morning we woke up and started our trip. Some of us visited the Ulpia Traiana Sarmizegetusa (which we already visited last year). On the way to the National Park we also made a quick stop to the Bigar Waterfall.

And finally somewhere in the afternoon we managed to get to the Păstrăvăria Camping, in the National Park where we would install our tents for the next 4 days.

For this trip I decided not to tell what we did every day, but rather tell what can be seen in the National Park and where the attractions can be found. But first, something about the Park.

Cheile Nerei (Nera Gorges) – Beușnița National Park  enjoys an extraordinary wealth of flora, a land of diversity and uniqueness, and a wild side maintained due to difficult access in the  area. Cheile Nerei-Beușnița National Park was created in order to preserve unique natural beauties, consisting of a wide variety of woody and grassy mezoxerofil plants specific to the submediterranean climate, that has to be protected and preserved as they are.

Today, The Cheile Nerei – Beușnița National Park is one of the ten national parks in the country, presenting unique elements (Cheile Nerei  – the longest gorges in Romania, Lacul Dracului (The Lake of the Devil), old forests, etc..), habitats and species of community interest. Cheile  Nerei – Beușnița National Park has a characteristic landscape given by the alternation of the mountain heights with  the Nera river’s corridor and karst landscape.

And now, let’s take it step by step and start with La Văioagă Waterfall.

hiking trail.  You will see a sign on the right side of the road.

Now this is something that is quite extraordinary. The lake has a depth of about 4 meters and a diameter of 15 meters. The water has an incredible blue – green color and the water never freezes, not even during winter time.

There are, of course, some legends in the area about how the lake got this beautiful color. It is said that a a young boy with blue eyes once fell in love with a beautiful girl, but his family didn’t allow their marriage. So they boy killed himself and from his tears the lake was formed.

This lake can be found if you walk further from the La Văioagă Waterfall, to the Păstrăvăria, in the direction of the Beușnița Waterfall, following the same blue line

This waterfall is 30 minutes further from the Ochiul Beiului Lake, on the blue triangle path

. It is actually an accumulation of many waterfalls, the biggest having 15 meters. 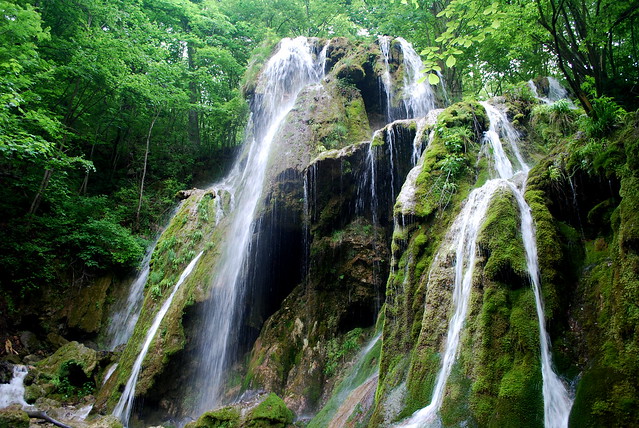 Hidden deep in the woods, it offers a beautiful view. Sometimes it may happen that the waterfall is smaller, but I guess that the heavy raining from the last days made it look just perfect.

The tunnels are right next to the Beiului Bridge, they have been built during the Roman Era to have an easier access through the mountains.

There is a total of 6 tunnels, the longest having 12 meters and going through all of them is a very nice one hour maximum walk.

Going from the Beiului Bridge to the Dracului Lake, about 30 minutes from the Cantonul Damian, the hiking trail takes us directly on the Nera river side, into the mountain.

This a part of the hiking trail that needs a bit more attention when passing it, because there is the risk of falling into the water. There is, however, a chain in the wall of the rock so you can use that to help you pass it safely.

There are two ways of getting to the Dracului Lake. The first one is to go from the Beiul Bridge to Cantonul Damian, pass the La Cârlige area and then another 3 – 4 hours until you get to the Lake. This is actually the most spectacular trail and the longest one. At La Cârlige area you have to cross the Nera river, through the water. Normally the water level is low, below your knees, but when we went, because of the heavy raining, the level was high and we couldn’t cross.

So, we chose the other option, going by car to the Cărbunari village and from there to the place called Ogașul Porcului. From there you have to walk a forest road for about 1 hour and a half until you get to the lake.

The lake was initially in a cave, but the cave ruff  has crashed down and now the lake is at the surface.

From the Dracului Lake the real Nera Gorges start, if you follow the trail towards the Cantonul Damian.

These would be the main attractions if you decide to take a trip to the Nera Gorges Natural Park. They are absolutely beautiful and really worth seeing, but I will have to mention some things that I didn’t really enjoy during the trip, so you also know what to expect.

The Păstrăvăria Camping can be sometimes very crowded and noisy. It’s actually just a place where you can put your tent, so don’t expect a bathroom and a decent toilet. There is however a small trailer where you can get beer, water and some food, but it’s only open from 11 AM to 7 PM (and they only serve food starting 1 PM). When we got there, it was full of tents and some of the people where having a real party, with loud music and everything. Lucky us, the rain scared them quickly and they left the second day.

The road into the gorges is perfect until you get to the Beiul Bridge. From there it’s going to be a hell to drive by car, so prepare and be patient and careful.

Except for the attractions mentioned above, the hiking trails are quite boring. This is of course my opinion as I am used to climbing high mountains and having panoramic views in front of my eyes. Here, you walk mainly in the forest and don’t have a clear picture of where you are and what is surrounding you.

If you are considering doing some rafting, than this is the place to start. We were also planning to do it, but the time didn’t allow us. Plan a whole day for this activity, as it can last up t0 8 hours. The Nera Gorges are the longest in the country (about 20 km).

Some extra information about having a trip to the Nera Gorges :

– There is another camping at Cantonul Damian, but it’s more difficult to get there by car, but it’s worth it if you want a more quite place to put your tent.

– It seems that the area is, especially during summer, quite populated with vipers, that have a lethal venom. However, they don’t attack humans all of a sudden. But still pay attention not to step on one. Take some hiking sticks with you and kick the trail with them, look closely where you step and take the marked trails.You cloud also use some gaiters for extra safety. In the last 20 years only about 2 – 3 people have been bitten by a viper.

– The villages nearby are always a very good option to search for accommodation, if camping is not your thing. Sasca Română and Sasca Montană have villas you can rent and also some restaurants. You can always chose to stay in one of these villages and go by car to the National Park.

– The Bei Bridge (Podul Bei) is the starting point for walking towards all attractions and there is also a small parking place to leave your car.

These being said, here is the set of photos from the trip : 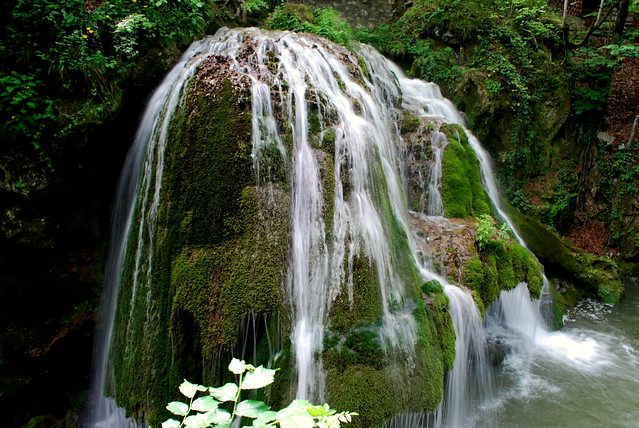