Visiting The Newgrange and Knowth Museum (known as Brú na Bóinne World Heritage Site) was definitely not planned when we first set foot in the plane from Bucharest to Dublin, but I guess that for some trips we make, it’s good to be spontaneous and accept the invitation to do something else than what you were initially thinking of doing while in Ireland.

The site of Newgrange and Knowth is an amazing history lesson. Actually it’s more than history. It’s an almost unreal story about forgotten civilizations who incredibly evolved and who created a world around them that still amazes us, the modern humans.

Newgrange and Knowth are two archeological sites, part of the UNESCO Heritage which are prehistoric monuments in County Meath, Ireland, located about one kilometer north of the River Boyne. They were built during the Neolithic period around 3200 BC, making them older than Stonehenge and the Egyptian pyramids.

What seems to be just some mounds covered with green grass, is actually a hidden world of the people who have lived in this area more than 5000 years ago, in a place where no one thought that it’s possible to have humans as early as that.

The mounds are all almost the same, although they do differ in size.

Newgrange was built by Stone Age farmers, the mound is 85 meters in diameter and 13.5 meters high, an area of about 1 acre.

A passage measuring 19 meters leads into a chamber with 3 alcoves. The passage and chamber are aligned with the rising sun at the Winter Solstice.

Newgrange is surrounded by 97 large stones called kerbstones some of which are engraved with megalithic art; the most striking is the entrance stone.

The passage entrance with the megalithic stone

Archaeologists classified Newgrange as a passage tomb, however Newgrange is now recognized to be much more than a passage tomb. Ancient Temple is a more fitting classification, a place of astrological, spiritual, religious and ceremonial importance, much as present day cathedrals are places of prestige and worship where dignitaries may be laid to rest.

The passages are independent of each other and each lead to a burial chamber. The eastern passage leads to a cruciform chamber, similar to that found at Newgrange. It contains three recesses and basin stones into which the cremated remains of the dead may have been placed.

The place between the mounds is full of stones with megalithic art.

Visitor access to Knowth and Newgrance is only by guided tour from the Brú na Bóinne World Heritage Site Visitor Centre from Easter to mid October. The Visitor Centre is located close to the village of Donore on the south bank of the river Boyne.

I have to say that the guided tour is extremely well organized and the guide gives you all the information you need to understand the importance of these two sites. There are buses that take you from Newgrange to Knowth and return, you have a timetable for all your tour, so you don’t lose any time wondering around for nothing.

The third archeological site, Dowth is a smaller one and still under excavation, so not yet available for visiting. 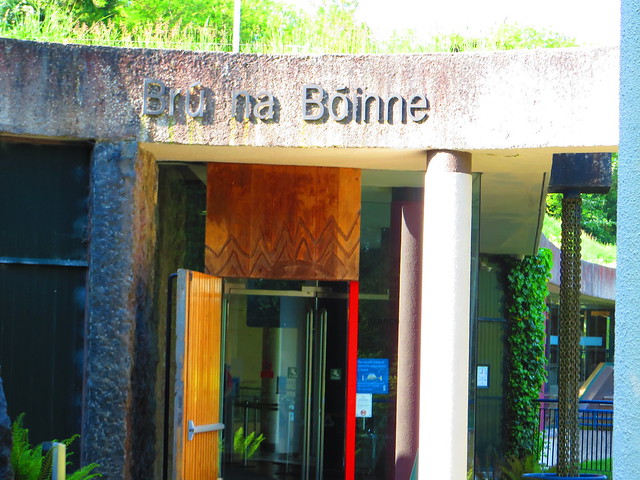 All access to the monuments at Newgrange and Knowth is through the Brú na Bóinne Visitor Centre 2km west of Donore village on the south side of the River Boyne. (GPS Co-Ordinates: N53.694567 W6.4463)

During our trip to Ireland we also visited:

A day in Howth