Slane is the village where we moved to after visiting Dublin, to a friend’s beautiful house, in a very quiet area, with green grass and cows and sheep wondering around, with a sunny weather, good enough to put you into that ‘It’s almost summer and I can only think about vacations’ mood.

The village is no different than other villages in Ireland. Beautiful architecture, one – two small pubs, where people go out in the evening for a pint of beer, all sort of local shops with local products. I would love to retire in a place like this, if the weather were as sunny as it was when we were there.

To the north of the village rises the Hill of Slane, which stands 158 metres (518 ft) above the surroundings, which is a place full of history. In the Metrical Dindshenchas, a collection of bardic verse, the ancient Fir Bolg king Sláine mac Dela was said to have been buried here, in the place that had been called Druim Fuar that came to be known in his memory Dumha Sláine.There is an artificial mound on the western end of the hilltop.

The hill may have been chosen as the site of Christian abbey due to the presence of an existing pagan shrine, the remains of which may be two standing stones in the burial yard.

It is also said that St. Patrick lit a Paschal fire on this hill top in A.D. 433 in defiance of the High King Laoire who forbid any other fires while a festival fire was burning on the Hill of Tara.

The Hill of Slane remained a center of religion and learning for many centuries after St. Patrick. The ruins of a friary church and college can be seen on the top of the hill. It is known that Slane Friary was restored in 1512. The ruins include a 19-metre (62 ft) high early Gothic tower. The friary was abandoned in 1723.

If you’re in Slane and you have time, don’t miss the Slane Castle as well. Unfortunately, we didn’t have any more time for that, so I guess we will have to go back one day.

If you’re in the area, going up the hill for a nice walk is not to be missed. For us, being in Slane for a few days was such a lovely experience, meeting new people, getting a taste of the Irish history and culture.

Close by there’s also the Bru na Boinne World Heritage Site, which also should not be missed. 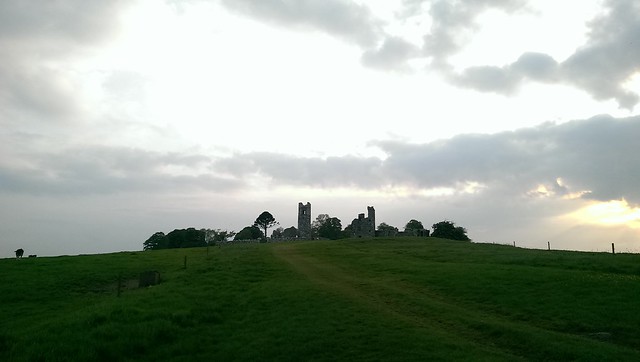