Summer weekend, perfect weather forecast, in the mood for sleeping under the stars, but also for doing some proper workout. Enough reasons to leave from work one Friday afternoon directly to the Râmețului Gorges (Cheile Râmețului).

Cheile Râmețului are part of the Trascău Mountains and can be easily reached from Sibiu, by getting to Teiuș and taking a left on the 750C road. You will get a paved road until reaching the Râmeț Monastery and a country road until reaching the entrance to the gorges. Still, you can get there with any type of car, no need for a 4X4. 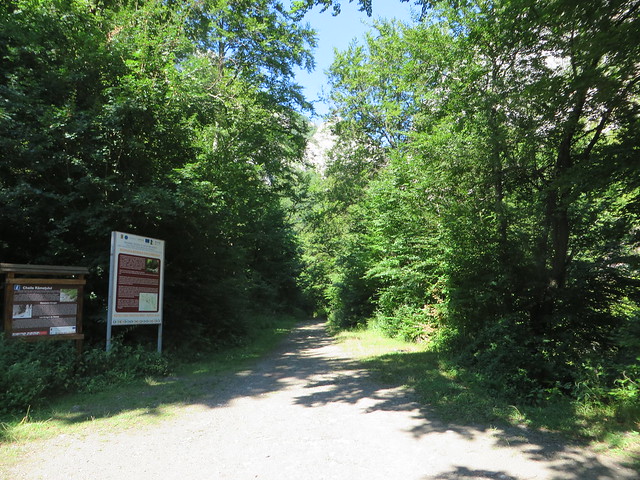 As said before, we got there Friday afternoon, and installed our tent just near the entrance to the gorges. There’s a nice glade there, surrounded by trees for a good shade during hot summer days and on the river bank, so with easy access to water. 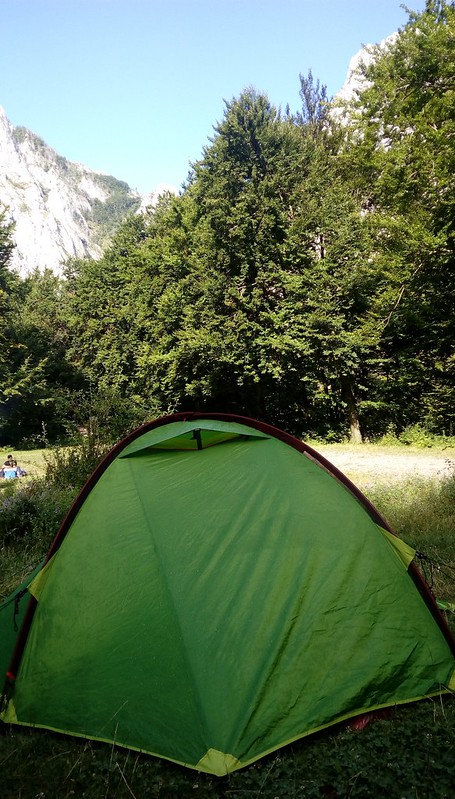 For the first night, we only had something quick to eat and a small fire to roast some pork fat (something Romanians really like to do when they go camping) and went to sleep. There was only us and another couple who got there for the same reasons we had. 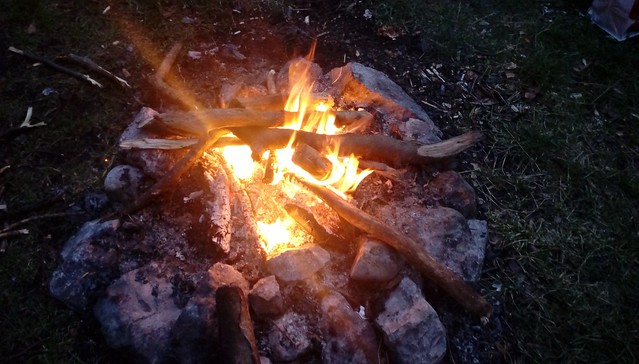 Saturday morning we woke up quite early, had a quick breakfast and started our hiking trip. 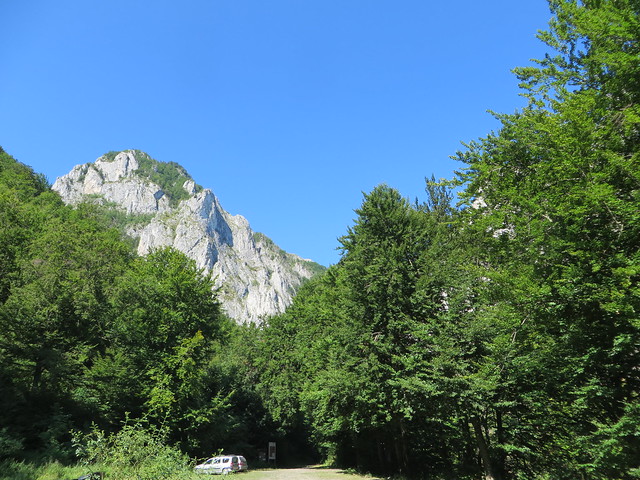 Râmețului Gorges have become very popular lately, because they are indeed spectacular. This also means, that they can get very crowded during summer weekends, especially since you can easily get there by car. This was the case for the weekend we got there, so we meet lots of people during the day. 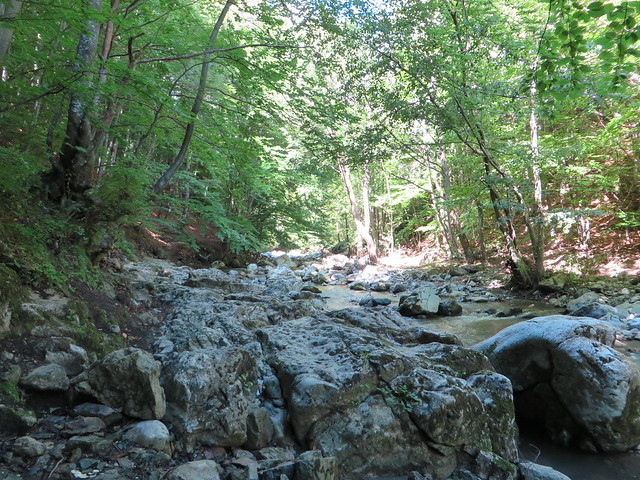 There are 2 main options to pass the Râmețului Gorges. Either through the river, or climbing up on the mountain ridge. We decided to do both, so we could compare the experiences. 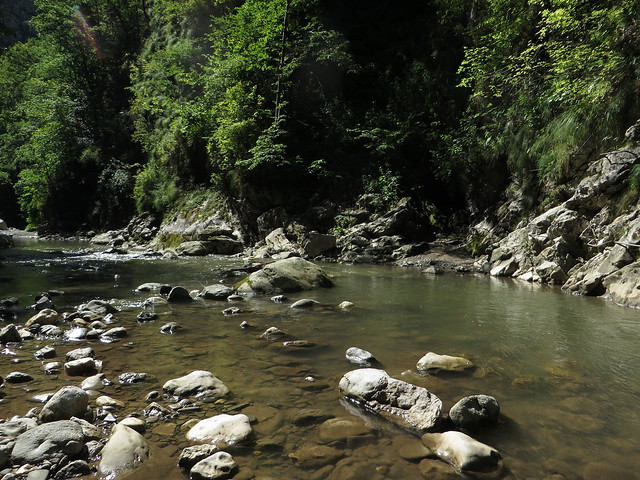 The path starts through the forest at first and soon you get on the river bank. From place to place, where the river is deeper, you have some chains and iron steps that can help you move on. 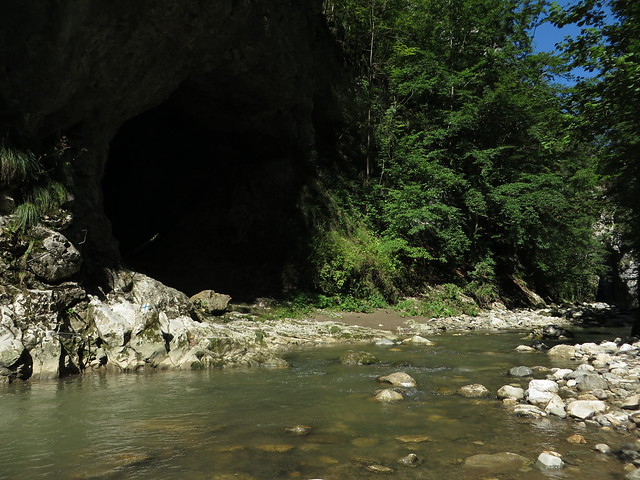 About 15 minutes after entering the gorges, we took a right on the blue triangle path

and started climbing the mountain to get on its ridge. We are not talking about very high mountains, but the path is quite steep, so you should have a good physical condition if you want to take this road. 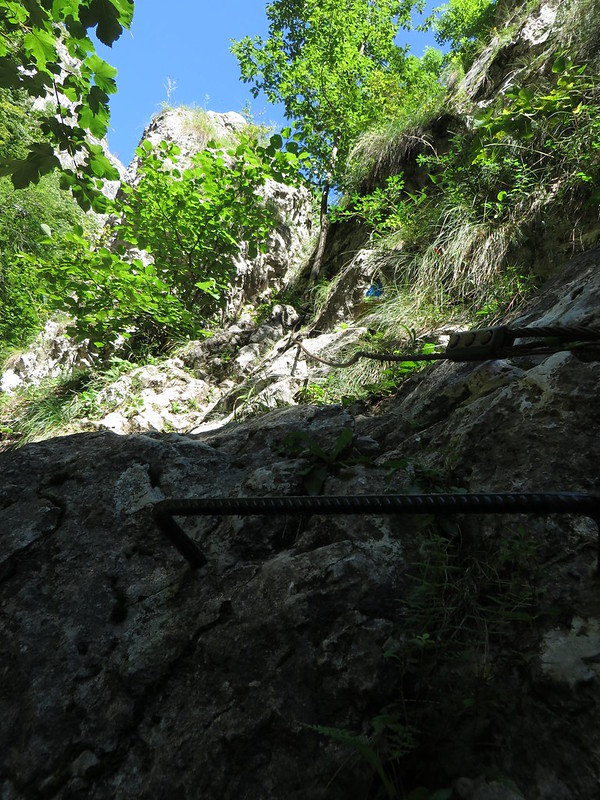 The view is very nice, so of course that all the effort of going up is very much worth it. The trip on the ridge took us about 2 hours. 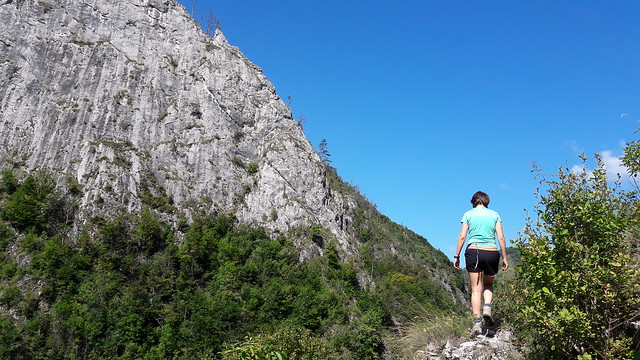 At a point the path goes down and you get to the river bank again, but at the other end of the gorges. If you continue on the blue cross path, you will get to a small village that is now abandoned. Still you will find there a small abandoned house. This is also where we stopped for a quick lunch. 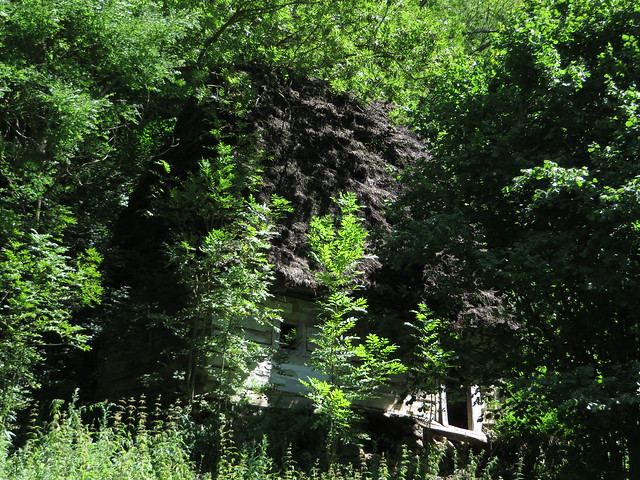 If you continue further you will get to the church and to another two houses of the abandoned village. Only that, this time, the two houses are not really abandoned. A family of two with two kids bought them and moved here to live a quite life away from all the urban noise. 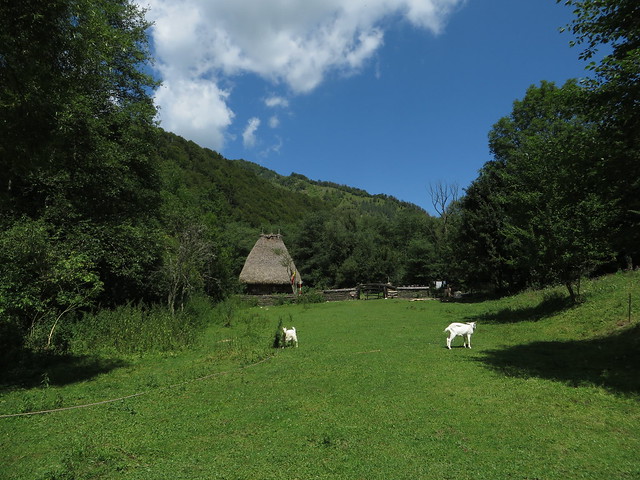 They are living a basic life, with no electricity, or running water, but with domestic animals, a small garden and lots of clean air and a beautiful view around their yard. 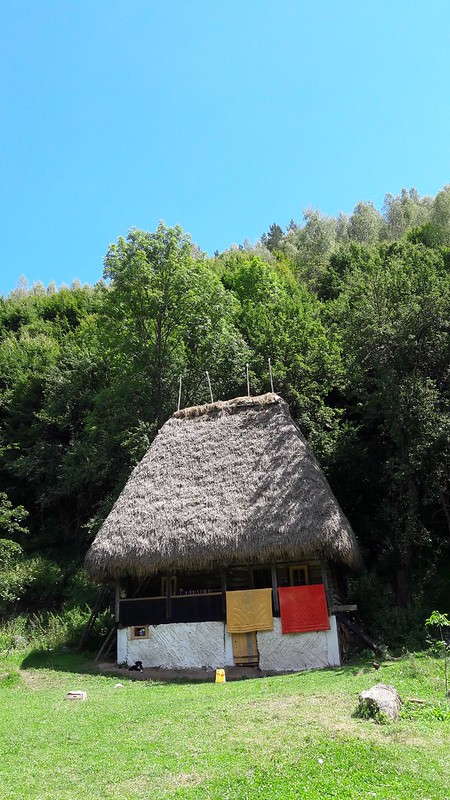 They also offer accommodation in a beautiful traditional house to those who don’t think that 5 stars hotels have too much to offer for the soul. The house is listed on Aribnb, and you have the option of getting there through the Râmeț Gorges  or from the village Brădești. Either way, you have to do some walking, as getting there with a car is not an option. 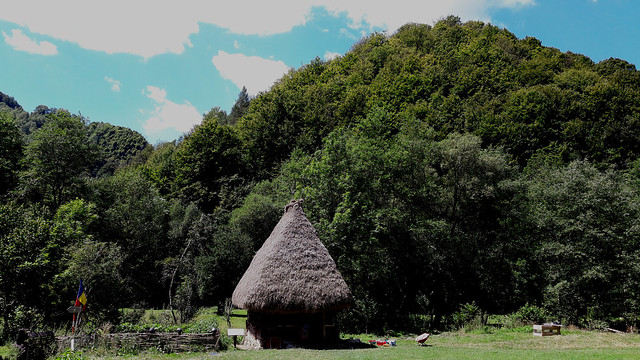 One of the host’s kids offered us a tour of the house and explained a bit what’s their daily routine.

After daydreaming a bit about how we could also live like this one day, we went back on the river bank. This time, we didn’t go up on the ridge again, but took the blue cross path that goes directly through the river. 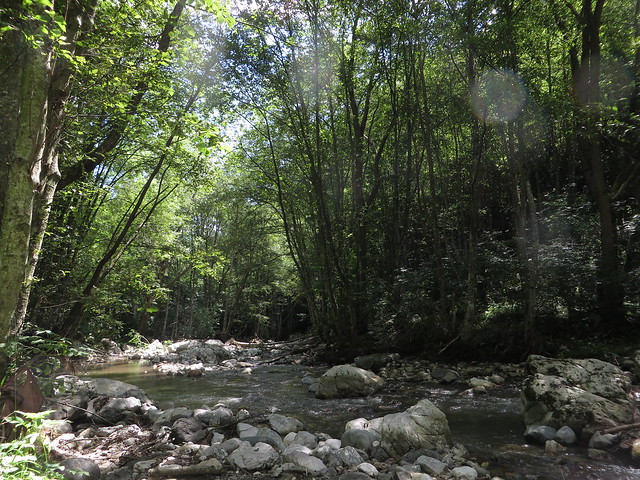 It took us about 2 hours to get back to the glade where we had installed our tent, but this time the trip was even more spectacular. 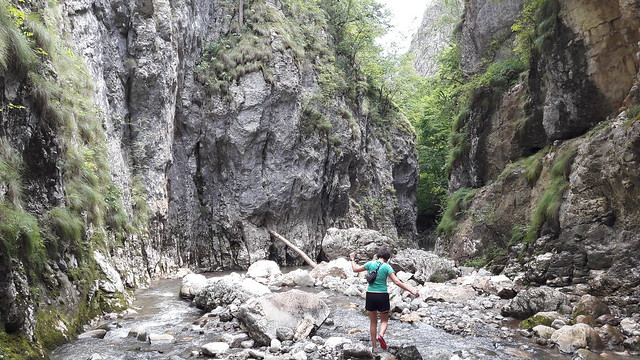 The gorges are just beautiful. There are some parts where you have steps and chains to help you move forward, but in some parts, you just have to go through the river. 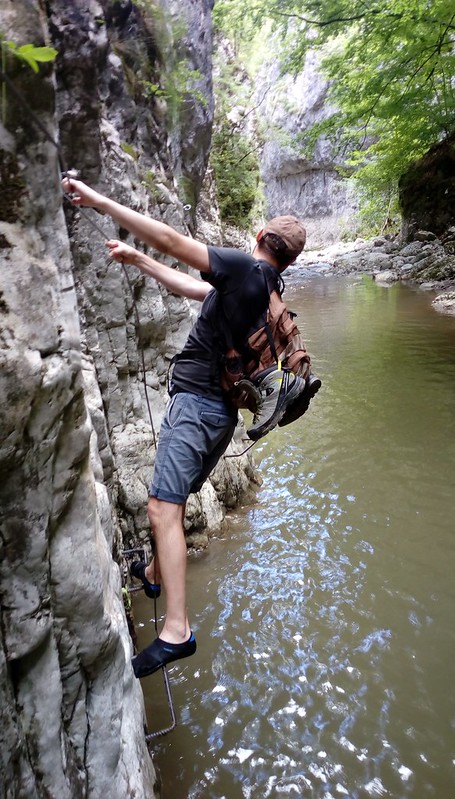 In some areas the water is quite deep so expect to get wet. Also, advisable is to have some water shoes, as there are lots of rocks under the water and it can get a bit dangerous. 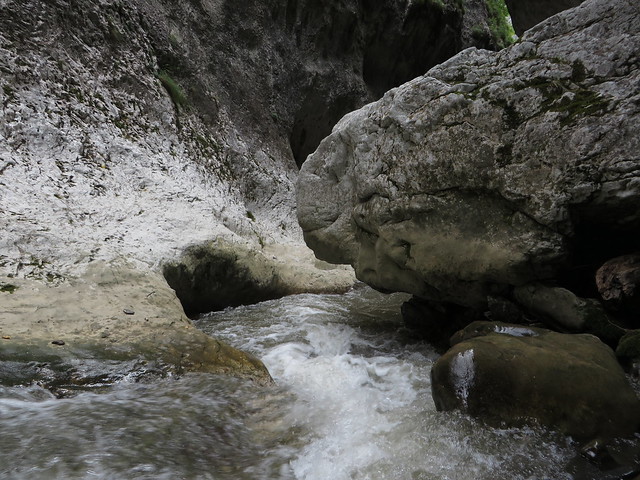 The only part we didn’t like that much, was that, as I said earlier, it got quite crowded and there were lots of people who had no idea what they were doing and where they were going. But other than that, it was such a nice experience for a sunny day.

It might be that during spring and beginning of summer the water level is higher, so you might not be actually able to pass thorough the gorges. Probably the best time is to go in August – September. 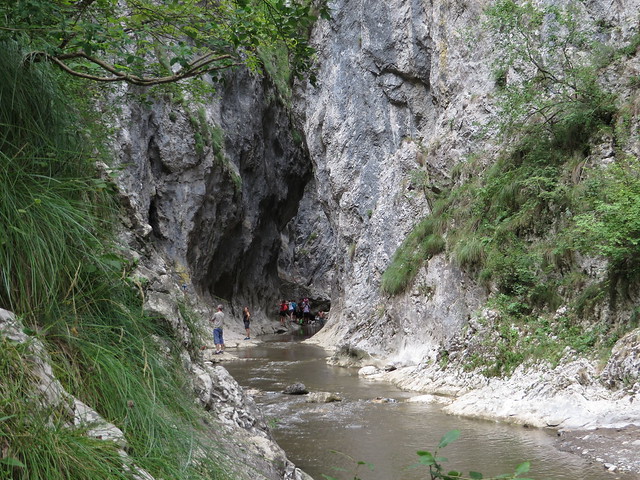 We spent Saturday night as well there, most of the people who came during the day had left, so we could enjoy again some quiet (after quickly driving back to Teiuș to get some beer 😀 :).